Bonanza was the show to watch 60 years ago. When Westerns dominated the market, this was the first one in color, and had James Arness not been so awesome as Marshall Dillon, it would have been the longest running Western. As it is, it has the 4th most episodes of any prime-time show ever (update: now sixth). It was an impressive show, to say the least, and this episode both did, and didn’t, start the show’s run. You’ll see why.

A Rose for Lotta was the first episode of the show, and introduced the Cartwright family to the world. The family consisted of Ben (Lorne Green), the aging father and owner of the Ponderosa Ranch, and his 3 sons, each from a different wife (Ben Cartwright was bad for the ladies, apparently, because they all died). The eldest was Adam (Pernell Roberts), who was an architectural engineer who had returned to work for his Ben, usually attributed to seeking to gain his father’s approval. The middle was Hoss (Dan Blocker), who is the original gentle giant, and peacekeeper between the family members. The youngest was the impulsive and hot-headed Little Joe (Michael Landon). Each son was very different in personality, but all were equally bound together as a family. It made for great tv… and it wasn’t clichéd then, because there were only like 10 TV shows in existence. Oh, and the theme song was awesome.

The plot of the episode involves a singer/actress named Lotta Crabtree (Yvonne De Carlo) being hired by a mining tycoon, Alpheus Troy (George Macready), to lure the Cartwrights into town in order to ransom one of them into surrendering the timber rights for the Ponderosa Ranch. She succeeds in drawing the amorous Little Joe in. For much of the episode, Lotta is “entertaining” Little Joe, but since this is 1959, he’s always wearing a four-piece suit to make sure that it’s chaste. Granted, the outfit that Lotta wears, while modest by modern standards, is still pretty provocative. Credit where it’s due, however, Yvonne De Carlo plays her as a deeper character than just being the money-hungry singer. She loves the finer things, but it’s clear that it’s because she started out with nothing. Eventually, she starts to have some feelings of regret about what she’s done, asking Joe if there’s any way that his family can just give Troy what he wants so that Joe won’t be hurt. 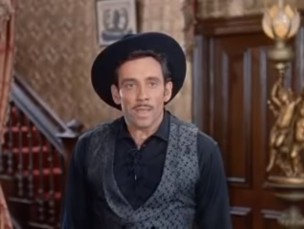 Meanwhile, the rest of the family rides in, ready to take on the men working for Troy. Troy directs them to his hired gun, Poole, a man famous for having “12 Notches in his Belt.” Ben agrees to duel him, but Adam, true to character, steps in. Adam wins, but declines to kill either Troy or Poole, and demands to be taken to Joe. By this point, however, Joe has escaped, leading the family to finally locate him dancing in the saloon. As the episode ends, they ride off into the dawn.

In this first episode, the Cartwrights, who in the rest of the series were usually a peaceful, lovable family, were much more aggressive. They were truly the “fighting Cartwrights” who were willing to take on anyone who threatened them. At one point in the episode, Adam pulls a gun on a henchman and gives him a minute to talk him out of pulling the trigger. Ben beats and hogties the man, and coldly tells his cook Hop Sing (Victor Sen Yung) to kill the man if the family isn’t back by morning. After this episode, they were toned down, because America wanted a slightly gentler Western. Later episodes even have outright goofy premises like Hoss and Little Joe trying to be detectives based on reading Hardy Boys books. What a different world we might have had. This episode gives us a taste of that world.

Also, this episode originally featured the only time the Bonanza theme was sung with lyrics, which were so awful that they were only broadcast once. The scene in which they sing it is… bad. It makes no sense, it completely clashes with the tone, and removing it was the right call. Despite the fact that it only aired once, when I bought my father the complete series, he remembered the exact part of the episode from which the song was cut (it was not the title sequence). He was 10 at the time of the only airing of the song, fifty years earlier. That ought to tell you how badly it stood out.

I won’t subject you to the horrible lyrics, but you can find it on YouTube if you want. However, here’s the normal version: