If you don’t know what The Simpsons is, well, congratulations on finally escaping the basement that you’ve lived in since birth. Welcome to the above-world. Here, The Simpsons is the show that never quite drops in quality enough to be outright cancelled. It has enough nostalgia left from seasons 2-10 that it has managed to hang on for an extra decade and a half. It has a few episodes on this list, and all of them are from that window because, for those years, the Simpsons managed to combine cartoon physics and reasoning with bitter reality in a way that even the Flintstones had to envy. This episode is a perfect example.

Quick Recap of the cast: The main characters of the show are the fat, lazy, idiot father Homer (Dan Castellaneta); his wife who definitely could have done better Marge (Julie Kavner); his prankster (and later sociopath) son Bart (Nancy Cartwright); brainy daughter Lisa (Yeardley Smith); baby Maggie; and the city of Springfield (hundreds of characters at this point).

The Simpsons is a show that has ebbed and flowed in terms of humor and relevance, but has never managed to die. It’s impacted the world so much at this point, that people know about it, even if they don’t know they know it. Homer Simpson is one of the most remembered and beloved figures on television, albeit not always for good reasons. One of the keys, though, is that, in typical sitcom fashion, Homer will always end up okay, no matter how ridiculous the situation. Other characters… not so much.

Frank Grimes was in only 1 episode of the Simpsons, but has been referenced at least once per year since then. He was an everyman who had to work extremely hard for everything he ever got. After seeing a story about him on TV, Homer’s boss, Mr. Burns, hires Grimes to work at the Springfield Nuclear Power plant. After being assigned to work in sector 7G, he takes an immediate dislike to Homer, both for his incompetence (Grimes stops Homer from drinking acid and gets yelled at for wasting it by Burns) and his seeming never-ending streak of good fortune (Homer is the only person in the plant without a Nuclear Science degree, having just shown up when the plant opened).  After losing his salary due to saving Homer, Grimes openly declares himself Homer’s enemy. 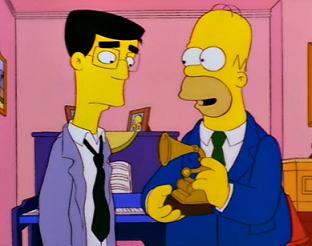 Homer, wanting to make amends, invites Grimes over for dinner, which only makes things worse. The Simpsons live in a rather large house (despite Homer being the only breadwinner and perpetually losing money), whereas Grimes lives above a bowling alley and below another bowling alley. They have money for lobster to try and treat Grimes. There are photos of Homer with former presidents, in space, and on tour with the Smashing Pumpkins. Homer even has a Grammy. Grimes, not seeing how Homer could merit any of these experiences or awards with his limited intelligence and lack of work ethic, leaves.

Later, Grimes rants to Homer’s co-workers, but they deny that Homer is a bad person. Grimes decides to show that Homer is an idiot by having him enter into a contest designed for children, where the contestants are asked to create a new model for the power plant. Homer ends up winning the contest, despite one of the other entries being so efficient that the model of it is powering the room (Homer’s design is the existing plant, but with a racing stripe and fins to make it more aerodynamic). In response to this, Grimes snaps and begins running through the plant doing all the things Homer usually does, believing that his incompetence will save him. In the end, he electrocutes himself and dies, showing that, realistically, Homer Simpson should be dead 100 times over from the things that he does on the show.

The episode really lampoons cartoon physics and hangs a lampshade on almost everything about the Simpsons’ lifestyle and continuity. The reason they keep going back to Grimes afterwards is to remind everyone that, sometimes, you need to just suspend that disbelief because otherwise your main character is a corpse.

BONUS – 93a: Krusty Gets Kancelled