The Twilight Zone was both nominated for, and received, more episodes on this list than any other show. It was early in television’s history, it pushed every envelope it could find, contained episodes by some of the best writers willing to work on TV at the time (which later made it okay for others to do likewise), and it has had one of the biggest impacts on society and pop culture of anything since Sherlock Holmes and Superman. Even if you’ve never seen an episode, you’ve at least seen a tribute to one, I guarantee it.*

An episode of The Twilight Zone was typically a morality tale relying on a sci-fi or fantasy element, and this plot is a classic one: Aliens arrive on Earth. However, rather than trying to take over the world, the Kanamits supply us with everything we ever wanted. Starvation, war, power issues, disease; you name it, they’re all eliminated. The world becomes a utopia. A commission is set up to determine if the aliens pose any threat, but the only information they have on the aliens is a book whose title is translated as “To Serve Man.” 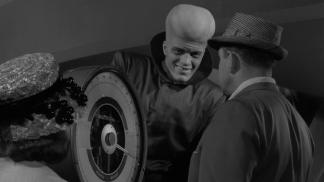 If you’ve watched films or television shows in the years since, you’ve probably seen a joke about what we find out at the end. Right before the main character departs for the home planet of the aliens, he is told that it’s not a guide to helping humanity. It’s a cookbook. The aliens only pretended to help humanity so that we would be fat, healthy, and docile. Now, we’re the perfect livestock, even unwittingly volunteering to go to the Kanamit home planet to be devoured.

I’m going to go ahead and address the two problems with the twist. First, it requires that someone can translate the language enough to translate the title, but not the rest of the book. Second, it requires that “serve” can have the same dual meaning in both English and Kanamit. However, there is actually a way to reconcile both of these: Someone just asked the ambassador what the title was. The Kanamits in the episode use a few colloquialisms, so they’re at least capable of using English puns. Since they probably assumed no one could translate the book for real without any form of reference, telling people the title in that way was probably just a sick joke on their part. Alternatively, maybe the guy who figured out the language died after translating the title, like Michael Ventris, the guy who translated Linear B.

Regardless, it’s not the twist that got this episode on the list rather than some of the others. While the twist is clever, and famous, it’s not any more so than the end of, say, “Time Enough at Last” (the one where the man with all the books he could read in a lifetime breaks his glasses). These were pretty standard Twilight Zone quality, so if I included them all, this list would be forty percent Twilight Zone.

What sets this episode apart is that this is one of the first episodes of television to truly break the Fourth Wall as we now consider it for a purpose other than humor. Sure, host Rod Serling always addressed the audience before and after each episode, but he was (almost) never a character, just the narrator. But, at the end of this episode, before Rod Serling shows up, the main character, Michael Chambers (Lloyd Bochner), who has been on a hunger strike to make himself less palatable, turns and talks to the audience, asking them if they’re on Earth or the spaceship with him. He says that in the end, it doesn’t matter, because everyone is just on the menu.

The subtle camera work as he says this creates a mild disorienting effect that adds to the message: We, the audience, are the cattle, whether in the field or the slaughterhouse. It made the audience part of the story in a way which had not really been done to that point on a major show, and it deserves acclaim.**

Rather than just put in the clip of the reveal, I’m instead putting in one of my favorite references, from Naked Gun II: The Smell of Fear. The man saying the phrase is none other than Lloyd Bochner.

** Serling calls it a “soliloquy” in his closing, but that’s not correct. Bochner isn’t talking out loud about his feelings regardless of anyone to hear it, like in Shakespeare. Bochner’s clearly talking to the audience.