Rome was doomed from the start. The show, I mean, not the city. Its budget was crippling, but that was because the production was so high-quality. The sets were massive and elaborate, the costuming was extravagant, and there were a lot of sexy happenings to be found. The last one probably didn’t hugely inflate the budget, but I know that the actresses were asking for more money to do nudity, so it didn’t help.

The show depicted the end of the Roman Republic and the rise of the Empire, as viewed through the eyes of two soldiers, Titus Pullo (Ray Stevenson) and Lucius Vorenus (Kevin McKidd). While both of them have names belonging to soldiers mentioned by Caesar in The Gallic Wars, they’re two of the only completely fictional characters in the series. Everyone else worth noticing is a historical figure crafted from writings about them. I’m not saying they aren’t fictionalized to some extent, they definitely were, but some parts of them are undeniably real to their historical image.

Triumph is exactly what the title promises. It starts at the end of the Roman Republic. Caesar (Ciarán Hinds) has defeated Pompey (Kenneth Cranham), and Cicero (David Bamber) and Brutus (Tobias Menzies) convince the senate to unite behind Caesar as the new Dictator for Life. Caesar declares that he shall have 5 days of triumph throughout the city to celebrate his appointment. 5 days of feasts and games unlike Rome has ever seen.

The main thing that defines this episode is all the things that happen that are incidental to the holidays. Vorenus, now running for municipal office, makes an impassioned speech about his belief that Caesar’s victory will be in the best interests of the republic, despite the fact that earlier he had called Caesar a traitor. Pullo, no longer a soldier, convinces Vorenus to free the woman he loves from slavery, only to find out when she’s released that she plans on marrying another man. He takes out his anger on Vorenus, calling him a hypocrite. The dialogue in the exchange is some of the best in the show, and it somehow seems to ring more true the more time passes. Meanwhile, Caesar orders the execution of the imprisoned Gallic leader Vercingetorix (Giovanni Calcagno), cementing his path towards the corruption of his office.

Meanwhile, Caesar’s Niece Atia (Polly Walker) and Caesar’s lover (and mother of Brutus) Servilia (Lindsay Duncan) meet in their typical frenemy conference. These two have spent the season humiliating each other, most recently with Atia having Servilia beaten and stripped in public. Despite the trauma, Servilia refuses to show any further weakness to Atia. 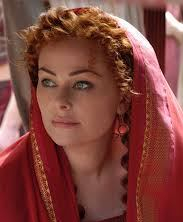 Instead, she starts talking about Atia’s daughter, and Servilia’s former sex-toy, Octavia (Kerry Condon). Octavia has taken to cutting herself in a temple in service to the “Great Mother,” which results in Octavian (Max Pirkis), her brother and future emperor, forcibly carrying her home. This image is devastating to the audience, however, because the reason she’s cutting herself is that she had been convinced by Servilia to seduce her own brother, Octavian, for information.

Like most episodes of Rome, the major celebration of this episode was a real event. The triumph of Caesar started April 12th, 45 BC, and did include the parading and execution of Vercingetorix. It lends a little extra credibility to the show that really sets it apart.

This episode is mostly to show that it is during the times of triumph, when everything seems to be going right, that we start to sow the seeds of our own destruction. Vorenus starts to give in to his hypocrisy in pursuit of fame, even if it’s with good intentions. Pullo gives in to his anger and frustration. Atia and Servilia, each having triumphed in some capacity over the other, continually fail to realize that their feud is doing nothing but destroying everyone around them.

Caesar’s fate is well-known, but the central scene of his Triumph in the episode is very notable, not just for the amazing drama of the scene, but also for what isn’t there. In Ancient Rome, one class of slave was called an “Auriga.” It was a slave that held a laurus crown over the head of the person celebrating the triumph during their procession. However, the most famous thing about this slave was that his primary job was not to hold the crown, but to whisper into the ear of the person being honored “memento homo,” or “remember you are a man.” The point of this was to remind the person that, despite the grand celebration, one should never lose their sense of proportion. In the Triumph of Caesar, the Auriga is present (because Rome was keen on accuracy), but he is silent. Caesar is not being told to remember he’s just a man. And in that moment, when Caesar starts to truly believe his own hype, we know he’s basically signing his death warrant.

Watch the Triumph of Gaius Julius Caesar in all his glory: