The Daily Show was a factor in American news and politics for at least a decade. Whether you love it or hate it, you are aware of it. It started as a spoof of local news shows under Craig Kilborn, but under Jon Stewart, the show has evolved into a commentary on the nature of politics and the media. It won two Peabody Awards and then spent two episodes mocking the fact that a comedy show managed to win an award dedicated to quality programming in community service. It’s a show that mocks pretty much everything about the news cycle, but mostly Fox News, because Fox News is so wonderfully mockable, and MSNBC, because they suck.

This episode was a long time coming. It all started with a clip within a montage of clips mocking CNBC. The clip showed Jim Cramer, the host of Mad Money, advising people that their money was safe with Bear Stearns… 6 days before it went bankrupt. Jim Cramer, on his show, complained that the clip was out of context. Stewart apologized, and played a clip of Jim Cramer explaining why Bear Stearns was a safe investment… 5 days before it went bankrupt, as well as an earlier clip advising people to put all their money in Bear Stearns. Jim Cramer then did two things: He complained on several shows about Stewart’s jabs, and he agreed to be on The Daily Show. These were both mistakes. Here’s a video summary of the build-up:

When Cramer appeared, Stewart pretty much dropped being a comedian. “I understand you want to make finance entertaining, but it’s not a f*cking game… I can’t reconcile the brilliance and knowledge that you have of the intricacies of the market with the crazy bullsh*t I see you do every night.” Stewart essentially unloaded on CNBC for allowing itself to invest all of its resources into entertainment value at the expense of journalistic integrity. Specifically, he pointed out that CNBC had accepted bare assurances from Bear Stearns that they were doing well, as opposed to actually investigating, which might have led to the discovery that the company was about to go the way of the Hindenburg. Sadly, if anything, this concern has become even more relevant since this episode aired. The show also managed to make a few shots at the real cause of this: The Public refusing to punish bad journalism. Even with all the times that Cramer was wrong, and even though he was not much better than blind guessing at picking winners, his ratings remained consistent enough that HE’S STILL ON THE AIR. 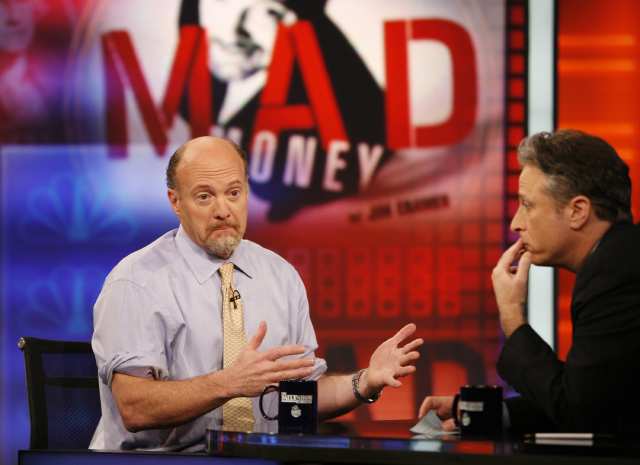 The worst part is that after about 3 minutes, Jim Cramer could only sheepishly agree that he should have done more work before reporting or advising. Stewart decided to be a real journalist for 20 minutes and pointed out the failings of the entire news cycle expertly. If only we had actually paid attention to him and bothered to take responsibility for our own failings.

Update: Since writing this in 2012, Jim Cramer still has a show (despite the last study I read saying he is only accurate 35-45% of the time), but Jon Stewart left his. This is pretty much the best statement of society I can find. Also, the news cycle has only gotten worse, and it’s pretty squarely the fault of the citizenry for making bad news practices the only viable news practices, which The Daily Show pointed out repeatedly.