This was a reader request, which brings the total number of Frasier spots up to 4. Granted, this isn’t actually one of the 100 episodes, but it’s still solid. 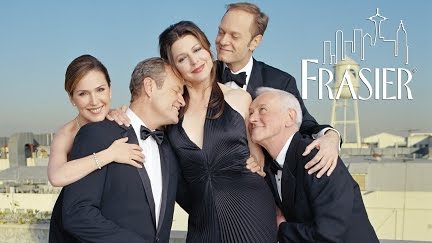 So, this episode focuses on Frasier (Kelsey Grammer) and Niles (David Hyde Pierce) and their inability to be content with anything. It starts when Frasier gets a piece of mail that was sent to his upstairs neighbor, the equally snooty Cam Winston (Brian Stokes Mitchell). The letter is an announcement of the opening of “La Porte d’Argent.” For those of you who don’t speak French, this means “The Silver Door.”

The letter contains no information about what “La Porte d’Argent” is, so the pair are anxiously trying to figure out schemes to uncover the secret, until their father, Martin (John Mahoney), points out that they could just go down to the location on the letter and ask. They discover that it’s a very exclusive health spa, which they con their way into, by having Niles pretend to be Cam Winston (who, for the record, has an extremely deep Baritone voice, leading Niles to have to speak like what I imagine Barry White sounded like as a child). The pair are completely satisfied by the unbelievable level of treatment that they receive at the spa… until they see a Senator going into a Gold Door in the spa. They try to follow him, but are stopped by the staff. The Gold Door is for the Gold Level, and they are but Silver.

The pair then begin to obsess over getting into the Gold Level at the spa, to the annoyance of everyone else. Finally, Roz (Peri Gilpin), confronts them about why they even care, when the Silver Level is already an unbelievable spa experience. Niles responds “Gold is better.” Roz points out that the Gold might not be the end of it. There could be even more levels beyond that, and the only reason they want them is that they can’t have them. However, she also reveals that she could get them into the Gold Level, because she had an affair with the Senator… and also saved his life from a mid-coital heart attack.

So, Frasier and Niles get into the Gold Level. Frasier is given a color therapy, which partially color-blinds him, and Niles is coated in an orange honey-butter mask and wrapped in seaweed, which renders him both blind and mostly immobile. They are put into a luxurious grotto to relax… at which point Frasier sees a Platinum door. He tries to open it, but is stopped by the staff, making them both anxious to see inside. Together, they stumble/hop through the door into the bright sunlight… of a dumpster-filled alley. The door was for the trash, and they are chased off by a beehive.

The B plot concerns Daphne (Jane Leeves) and Martin watching old TV shows so that the English Daphne can catch up on American culture. While watching, Daphne keeps comparing Martin to the elderly characters on the shows, such as Rockford’s Dad on The Rockford Files and Colonel Potter on M*A*S*H. Eventually, she just pretends she was confused on the character names and identifies Martin as younger actors just so he’ll stop complaining.

The theme for the episode is pretty straightforward. So straightforward that they have more than 3 characters in the episode comment on it directly. Niles and Frasier want what they can’t have, so they’re never happy with what they do. Each time they reach what they perceive is the pinnacle of society, they seem happy with what they’re getting. After the first spa treatment, before they find the Gold Door, they’re both commenting that they’ve never felt better. After the second in the Gold Room, they think the same thing, until they find the “Platinum Door.” It’s a pretty normal theme, and one that’s fairly universal, but it applies more to people like Niles and Frasier, who are fabulously wealthy off of dream jobs, than to normal people like Roz or Daphne. Frasier and Niles live at one of the highest rungs of society. They should be content, but instead they’re even more focused on advancement than other people. Rich people will argue that their refusal to be content is why they achieved so much, and sometimes that’s true, but Niles and Frasier didn’t really. Niles married rich, and Frasier lucked into a cushy job that he hardly works at. Ultimately, it’s just a “grass is always greener” story. Still, few things are funnier than Niles hopping in a seaweed wrap. David Hyde Pierce knows physical comedy.