Earlier on the list, we already had The Bob Newhart Show, and Newhart, which ended up overlapping at the end, so…

Gonna give you a brief refresher:

Bob Newhart plays Bob Hartley, a psychiatrist. The supporting cast are his wife Emily, played by Suzanne Pleshette, his secretary, played by Marcia Wallace, and Jerry, the dentist with whom he shares office space. Most of the plots revolve around the fact that Bob and Emily try to be the sane people in an insane world, despite the fact that they aren’t actually that normal.

However, most of it is just an excuse to showcase the comedic talents. This episode also benefits from the direction of TV legend James Charles. Charles’s specialty is timing, framing complicated jokes so that they can be followed, and intense character scenes. This becomes apparent in this episode, especially the last third of the episode. 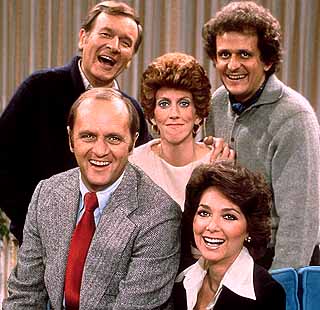 The premise of this is that Bob’s wife has told him that they’re going to spend Thanksgiving with her family. Bob, however, clearly doesn’t like that idea. So, after one of his patients tells him that he has serious problems on major holidays and begs him to stay in town, Bob uses it as an excuse to back out of the trip, saying that he’s needed. His wife, surprisingly, doesn’t seem to care much, only telling him that she’s going to go on the trip without him, leaving him alone on Thanksgiving. Then, after refunding his plane tickets, the patient tells Bob that, in fact, he doesn’t need him. This leaves Bob with nothing to do, alone at thanksgiving. So, he ends up inviting both his patient and the bachelor dentist from his floor over to watch football. They’re soon joined by another neighbor. Everyone brings cheap alcohol (one even brings a huge jug of Vodka and cider), and they participate in a drinking game whereby every time someone scores on William and Mary during Thanksgiving football, you drink. William and Mary proceed to get stomped (we don’t hear the final score, but after the first 10 minutes, they’re down 38-6), and the cast proceeds to get absolutely hammered drunk. And, with that set-up, we get to what actually makes this episode worthwhile.

Shows don’t often do drunk well. Some actors and writers seem to have trouble with showing how people actually act when drunk. Most people, when drunk, are just more of themselves than they normally would be, both the good and bad parts, but TV and film often portray them as raving maniacs. This episode, however, does not. It pretty much just plays out as four people drunk and having a fun time. It just happens those four people are comic geniuses. 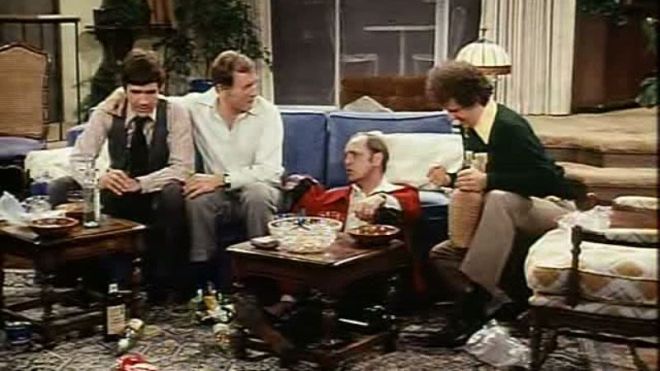 If I had to guess, I would think that when this episode was being written, it was the subject of a bet over how to make the most terrible jokes ever sound amazing. Because that’s what this episode pulls off. Knock-knock jokes. Bad puns. Terrible sight gags. Funny mispronunciations. Everything that usually you would think is god-awful in a television show is presented here, and they all will make you laugh. It has a scene of one of Bob

Newhart’s famous one-sided phone calls with him ordering Chinese food, but, rather than being the person reacting to the crazy person, Bob is actually playing the absurd person on the other side of the phone. And it all comes to a head when Bob’s wife returns early, finding the four completely trashed in the living room, and, after first deciding she should sober them up, instead opts to have a drink herself.

This episode ends with one of the single lamest jokes in sitcom history, one that is actually found in children’s joke books in one form or another, and yet, somehow, it actually will make you chuckle. I don’t know exactly what it is, but this episode manages to reshape everything that’s tired, cliché, or even just lame into a great scene. I guess the secret is just to add alcohol… which, in retrospect, is kind of obvious.