Okay, so, you probably know what SNL is, and it’s already been on this list. Never quite bad enough to get cancelled, it’s been hit and miss throughout its history, usually depending on the quality of the cast. Here was the cast for this episode: Dan Aykroyd, Bill Murray, John Belushi, Jane Curtin, Gilda Radner, Laraine Newman, and Garrett Morris. If you don’t recognize any of these names, quit whatever you’re doing now, walk to a window, look out upon the horizon and question every decision that has led you to this point, for you have made mistakes. The point is, this was an amazing cast of people. What could make it better? Having the then number one stand-up comic in the world host the show: Steve “I’ve already been on this list because I’m amazing” Martin.

This wasn’t the first time Martin had hosted. In fact, this was his fifth time hosting in only three seasons, so the cast knew they could just use him as another Not Ready for Prime-Time player. Additionally, instead of having a musician as the musical guest, they had the Blues Brothers, in their first official appearance. If you don’t know the Blues Brothers, see the window thing above, then go buy a movie called The Blues Brothers, watch it, love it, and, for all that is holy, don’t watch the sequel.

The episode opens with Paul Shaffer doing a fake introduction of the Blues Brothers, who perform “Hey Bartender.” Then, Steve Martin delivers one of the best monologues in the history of the show, ending with him beating the hell out of an audience member. The sketches throughout the episode include: “Theodoric of York, Medieval Barber,” a sketch of Steve Martin as a medieval barber obsessed with using bloodletting as a cure for basically anything; “The Festrunk Brothers,” famous for being two “wild and crazy guys!” (ask your parents what that means); a really well-done dance sketch between Martin and Gilda Radner that ranges from beautiful to hilariously absurd; a short film about ballet and breakdancing by Gary Weis, who did the videos for Walk Like an Egyptian and You Can Call Me Al; and Nerds at the Science Fair. Each of these is funny, most of them so funny that they became recurring sketches (except the Festrunk Brothers, who had appeared before). But, somehow, they weren’t the main reasons why this episode was amazing. It’s the other three sketches.

First, Steve Martin performs the song “King Tut.” This song is weird, it’s random, and it’s catchy as hell. Martin not only performs lines like “Born in Arizona, moved to Babylonia” with a straight face, but makes you believe that he sincerely thinks he’s performing a hit. And, to be fair, he was right. He released the song as a single and it made the top 20 on the Billboard charts. For just over 2 minutes of fake lines about a pharaoh, that’s mind-blowing.

Second, while it wasn’t the best during their run, this was definitely one of the better Weekend Updates with Dan Aykroyd and Jane Curtain, this one had some solid gags. Dan getting upset that he was short-changed on his pot order, conducting the drug sale on air under the guise of making sure that it wasn’t “tainted.” A Nasal contraceptive is developed in India, but, despite the Kama Sutra’s encouragement, nobody has figured out how to have nasal intercourse. But, mostly, it’s the point/counterpoint on abortion. Their banter on those is usually great, but on this one, it’s particularly hilarious because it’s actually a controversial issue (I mean in 1978, but now would still work), and they actually do present the usual sides of the debate, albeit exaggerated (including the line “Haven’t they heard of abstinence? I myself haven’t had sex in two years, and I’m rich.”). Plus, it includes a great use of the classic line “Jane, you ignorant slut.”

Last, though, is a little mind boggling. The Blues Brothers came on to perform the song “I Don’t Know,” and they bring the funk. They bring all of it. In fact, they brought so much of it that, as if they need to top Steve Martin, they used it to promote their forthcoming album “Briefcase Full of Blues,” which proceeded to go double platinum, produce 2 top forty singles, and led to an amazing movie that definitely has no sequel. 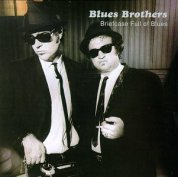 This episode was like a double rainbow: Beautiful, rare, and probably made better by drugs.

Link to the NBC site (http://www.nbc.com/saturday-night-live/season-3/episode/18-steve-martin-with-the-blues-brothers-65761)