M*A*S*H was already on the list once. Let me give you the description again:

M*A*S*H was a comedy about war. That’s a pretty dark place to start, and M*A*S*H was pretty famous for being able to bounce back and forth between off-the-wall humor and dark, maudlin drama.

In fact, in an episode of Futurama, iHawk, acharacter based on Hawkeye (Alan Alda), has a switch that causes him to oscillate between irreverent humor and maudlin drinking. That was not an inaccurate portrayal of the characters on the show, especially Hawkeye. In order to live on the battlefield and to treat the wounded, the crew of the M*A*S*H tent have to balance accepting the horrible reality in front of them with standing back and mocking life’s cruelties. It made M*A*S*H a show where the audience could not guess what the theme of the next show was going to be like.

From the title, people who regularly watched M*A*S*H knew this was going to be the departure of Lt. Col. Henry Blake (McLean Stevenson), because Abyssinia had been used by Blake as a way to say goodbye (because it sounds like “I’ll-be-seein-ya”). Up until this point, Blake had been the commander of the 4077th M*A*S*H, and had been notable for being a fairly laid-back character, allowing Hawkeye and Trapper John (Wayne Rogers, later Pernell Roberts) to get away with their typical hijinks, while opposing the more military discipline hard-liners Major Frank Burns (Larry Linville) and Major Margaret “Hot Lips” Houlihan (Loretta Swit). Section 8 seeker Klinger (Jamie Farr), not-too-preachy 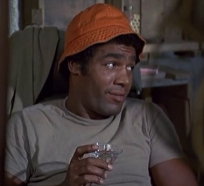 chaplain Father Mulcahy (William Christopher), and naïve Iowa farm boy Radar (Gary Burghoff) rounded out the cast for the first 3 seasons. And for the first season they had a black neurosurgeon named “Spearchucker Jones,” played by Timothy Brown. He’s not in this episode, I just like reminding people that that was a thing that happened, and was found on after-school re-runs during my childhood with no further context given. Take it as you will.

The episode opens with a message that informs the cast of Henry Blake’s impending honorable discharge. Despite how much they know they’re going to miss him, Hawkeye and Trapper John acknowledge that they don’t begrudge him anything, because they also want to finish their service. Henry calls home, telling his wife and kids that he’ll be coming back soon. During the build-up to the call, we hear Henry recount his wife and children’s weekly schedules, which he knows intimately, from halfway around the world. It’s touching. Radar and Henry then engage in a fairly serious and emotional exchange, since Radar had come to view Henry as a surrogate father. At first, Henry tries to downplay it, but then ends up giving him a family heirloom, which, in typical M*A*S*H fashion, is a rectal thermometer.

Most of the rest of the episode is a celebration in honor of Henry’s service and his general awesomeness as a person. Hawkeye, Radar, and Trapper John get drunk with him and reminisce. The next morning, Major Burns is now in charge, and tries to show the strength of his new extremely disciplined attitude towards the unit, before Henry, on his way out, tells Burns to “take it easy” and “stuff that whistle someplace.” Finally, before Henry leaves, he hugs Radar and tells him to behave himself, or he’ll “come back and kick [his] butt.” With that, he departs back to his family.

And then, the end comes. In the last scene, in the camp O.R., Radar comes in on Trapper John and Hawkeye performing surgery. He barely manages to relay the famous message: “Lieutenant Colonel Henry Blake’s plane was shot down over the Sea of Japan. It spun

in… there were no survivors.” Hawkeye and Trapper John professionally and dutifully finish operating on their patient as the audience is shown that the usually uptight and adversarial Burns and Houlihan have broken down crying at the news. And it is with this juxtaposition, Hawkeye and Trapper John firmly doing their duty and Burns and Houlihan breaking down in emotion, that the episode closes. There is a small tribute to McLean Stevenson afterwards before the credits.

When this episode aired, this kind of thing didn’t happen. You didn’t just kill a character off after you’d given him his happy ending, especially when it was such a beloved character as Henry. People hated it so much, that in some re-runs, they cut the ending. But, honestly, it was perfect for what M*A*S*H was going for. War sucks. People die randomly, whether they deserved it or not. It’s why it’s supposed to be avoided unless it is worth that high cost. Trying to ignore the cost is not the solution. M*A*S*H decided to shock America by reminding them of that cost, and, in 1975, it was something that they definitely didn’t want to hear. Nonetheless, it bears repeating: