Dr. Gregory House (Hugh “Seriously, I have range guys” Laurie) is basically Sherlock Holmes with a medical degree, a Vicodin addiction, and a limp. Never forget that Holmes was a cocaine and morphine addict, kids.

Really, making a Holmes medical drama is extra fitting, because the inspiration for Sherlock Holmes was Joseph Bell, a Scottish Surgeon famous for his demonstrations of deductive reasoning. It somehow brings everything full-circle. In addition to being extremely intelligent and observant, House is a Vicodin addict, has a pronounced limp, and is an almost entirely insufferable human being. But, his worth as a diagnostician usually outweighs the difficulty of working with him.

This episode is the closest thing I have to an example of a pataphysical structure. It’s not really one, because it doesn’t quite go far enough, but it’s close. In this episode, we see someone tell a supposedly true story, or three, as it were, that he is seen interacting with, changing things within, and reconfiguring as he goes. It’s not entirely unique in this, but the way it’s presented and what truth is revealed through the stories definitely reframes the episode in a very different way than most television shows would even try. And this is from a show that, aside from a handful of episodes, is known for being formulaic.

In a typical episode of House, a patient comes in to the Princeton-Plainsboro teaching hospital with a disease that nobody knows, House and his team, Drs. Foreman (Omar Epps), Cameron (Jennifer Morrison), and Chase (Jesse Spencer), misdiagnose the patient six or seven times before finally figuring out what’s wrong with them. During this process, House makes snarky and mean comments, says dirty/mean things to his boss Dr. Cuddy (Lisa Edelstein), and hangs with/screws up life for his only real friend Dr. Wilson (Robert Sean Leonard). This episode manages to avoid most of that. (Update: Wrote this before adding the image above, but it supports my summary)

House agrees to lecture about diagnostics at the med school in exchange for fewer clinic hours. As part of the lecture, he decides to propose three hypothetical situations based on one single common symptom: Leg pain. The first is a farmer who was bitten by a rattlesnake. The second is a female volleyball player who appears to be having tendinitis. The third is Carmen Electra who has severe leg pain while mini-golfing. Which, according to House, in his combo flashback/story/lesson/fantasy, she was doing while wearing a traditional golfing outfit with short-shorts.

As I said before, the structure of these stories is really interesting. The med students make suggestions, and House’s hypotheticals play out based on them, while also interacting with them himself. It gives the stories a very different feel to have them be both metaphysical and yet physical at the same time to the characters. It creates a weird twist on reality within the show, which builds up to the climax.

As the farmer’s story plays out, the farmer has a reaction to anti-venom, and it’s revealed that he lied about the snake, because his dog bit him. The dog had a prior bite report, so the dog would have to be put down if the farmer told the truth. House uses this to continue his frequent theme of “everybody lies.” Ultimately, the farmer loses his leg to an infection and his dog to euthanasia, but the farmer gets a prosthetic and a new dog. To balance it out, the volleyball player ends up having osteosarcoma, but beats it and keeps her leg.

The third story progresses a little differently. First, Carmen Electra turns out to be a male golfer, who complains of pain until given Demerol, which he grabs out of the nurse’s hand and injects himself. The students, naturally, assume that he’s a drug addict looking for a fix. However, the patient then starts to undergo organ failure, and the med students can’t figure out why, angering House. His team, as well as Wilson and Cuddy, arrive at the lecture, and determine that the patient was suffering from an aneurysm that led to an infarction, before further realizing that this is the story of how House got his limp. 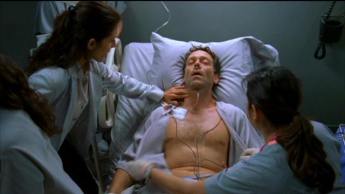 House, in the past, refuses to have his leg amputated, instead opting for a procedure to try and restore function. However, he suffers a heart attack and dies, briefly, seeing the other two stories he’s told during the lecture as visions. Wilson, in the present, asks if he believes the visions were real.

House responds that he finds it comforting to think they were just images his mind conjured as he died, because then all of life isn’t just a test. In the past, House is put into a coma, and his then-girlfriend Stacy will, on the advice of his future-boss Cuddy, subject House to a different surgical procedure than he requested, which results in the chronic leg pain he suffers now, the source of his drug addiction.

Aside from the format, this episode also receives marks for having a main character reveal his secrets, albeit indirectly, before an audience of strangers. This episode is basically House’s origin story, but, more than that, it’s his confession and his justification for who he is. He’s an atheist, and for a very specific reason. He’s an addict, but he actually is constantly in pain. He’s an asshole to his boss, because he blames her for his situation, and might be right to do so. And, despite thinking that they were just meaningless images, House still used the two other stories as a way to cope with his own fate, and to enable himself to be honest about his past. It ends up being a complex, layered narrative, but Hugh Laurie manages to sell it, and the structure ends up drawing you further in than most stories could.

Also, the title is a pun on three-storied house, so that’s fun.

House is… difficult to find on a streaming service, but you can buy it on Amazon.