Alright, so, I will freely say that I actually like the episode of Game of Thrones that made the list more than this one. But, I also can’t object to this being on the list. Since several people have asked if this was going on the list, and I was on the fence about just adding it myself, it’s getting an entry.

“Battle of the Bastards” is unlike anything I’ve ever seen on TV. The sheer scale of the episode is almost beyond belief. While it does almost nothing in terms of dialogue or several of the metrics I usually use to weight episodes here, it doesn’t matter, I still have to concede this is one of the greatest episodes of television of all time based almost entirely on its incredible acting, challenging cinematography, and enormous scope.

BACKGROUND (Reduced beyond the point of usefulness)

… It’s Game of Thrones. Do you really expect me to explain 5 huge books and a full season or two of TV just to give you the background for this? Oh, sure. Here you go:

There’s a place called Westeros. The King gets killed. His wife’s family tries to take over. A bunch of people oppose that. All of them die. Most of the wife’s family dies. The main family, the Starks, all get separated when their home, Winterfell, gets taken over by a later-dickless traitor, then taken over again by a giant festering wankstain named Ramsay “the Bastard of” Bolton (Iwan Rheon). Jon Snow (Kit Harrington), a Stark bastard son, dies, gets brought back to life, goes home to the North with an army to take it back. Jon’s sister Sansa (Sophie Turner) requests the help of some guy named Littlefinger (Aidan Gillen) who wants to bang her super badly. In the meantime, some naked chick does stuff with dragons over on another continent and some zombies are walking down from the North Pole, having presumably killed Santa. Also, there’s Peter Dinklage, who is a treasure.

Okay, so, I’ll separate this into the two locations. Esteros and Westeros. Guess which one is to the East?

So, in Esteros, Daenerys Targaryen (Emilia Clarke) and Tyrion Lannister (Peter “I’m basically changing Hollywood through sheer force of awesome” Dinklage) are dealing with a large group of slavers that they recently pissed off who have brought a fleet to block her from sailing to Westeros. She brings the heads of the fleet before them, where they tell her what terms they’d accept. She responds by reminding them what happens when you have dragons and nobody else does: Dragon. Beats. Everything. (for another season).

It really isn’t even much of a contest. Dragons can breathe fire (which, given the level of heat displayed, should be a blue or just contains a ton of sodium, because it’s clearly above 3000°F) at a greater distance than even much of the ballista available at the science level of Esteros, can fly at speeds that appear to be in excess of 100-200 MPH, are immune to most other kinds of attack, and are capable of lifting weights in the tons. It’s basically a high-speed flying tank with a never-ending flamethrower against people who don’t have guns. She proceeds to burn the entire fleet in a matter of minutes, kills most of the slavers, and pretty much massacres everyone else who has been challenging her by the end of the day. Then, the pair procures another fleet to bring them to Westeros. And, I assume, go to the spa to get matching mani/pedis to relax.

Which brings us to Westeros, where the meat of the episode happens. Not to say that the Dragons Gone Wild scenes weren’t awesome, they absolutely were, but Winterfell is where it’s at. So, the important characters on Jon Snow’s side meet with Ramsay “I made Joffrey look good, and he was basically Hitler’s wet dream” Bolton. Ramsay offers to “pardon” Jon if Jon hands over Sansa Stark (Jon’s not-quite sister). Jon offers to fight one-on-one, Ramsay rebuffs him and says that he has Jon’s youngest not-quite brother, Rickon Stark (Art Parkinson), as a captive. Sansa tell Ramsay, her rapist and ex-husband, that the next day they’ll attack and Ramsay will die. Ramsay says that he’s been starving his hounds in anticipation of feeding Jon to them, because he’s the worst.

The armies meet up the next morning, and Ramsay brings out Rickon. Ramsay tells him to run to Jon and starts to shoot arrows at him. Just before he reaches Jon, Rickon is struck by one of Ramsay’s arrows and dies.  Jon then gets angry at the whole “dead brother in my arms” thing, and starts to charge, and the army follows shortly.

The battle scene that follows is almost incomprehensibly huge. I recommend watching the entire episode to really get the feel of it, but what’s amazing is that it manages to also 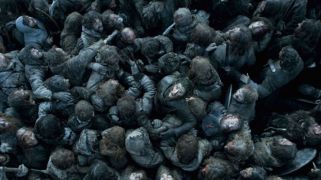 be so intense and personal when it focuses on the important characters. The sad realistic elements are also there, such as where there are literal mountains of corpses formed from the fighting. At one point, Jon Snow is almost buried by a poorly-timed movement of his own forces, and the show really manages to convey the suffocation he’s experiencing from nothing more than a giant, writing mass of panicking warriors. You won’t even realize that you stopped breathing until Jon pulls himself out. Finally, as Jon’s forces are surrounded and it appears they’ve lost, Littlefinger arrives bringing the cavalry with him, literally.

Ramsay retreats, and Jon follows into Winterfell, his ancestral home. Ramsay kills off Wun Wun (Ian Whyte), a giant in Jon’s army, and Jon squares off against him. Ramsay attempts to kill Jon with an arrow, but Jon blocks it and proceeds to attempt to beat Ramsay to death, only stopping when he sees Sansa. However, this is quickly revealed to not be any form of mercy, as Sansa meets with Ramsay in his own kennel. Ramsay tells her that his hounds will never harm him, even though he hasn’t fed them in a week, because “they’re loyal beasts.” Sansa reminds him of the truth: “They were. Now they’re starving.” She summons the dogs, who proceed to brutally devour their master face-first. Sansa walks away, smiling. 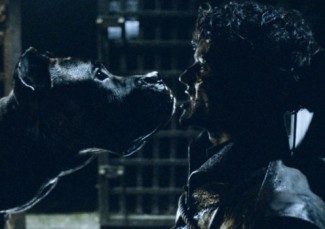 So, thematically, this episode is pretty weak, and, honestly, since almost everyone that dies in it is a character that had a tragic flaw which led to it, that makes this more of a traditional tragedy than Game of Thrones usually has. However, I’ll be damned if almost everything in it isn’t fun to watch. Dragons finally truly kicking the amount of ass that the show had promised for 6 seasons, a battle whose scale exceeds almost any movie taking place in the middle ages, intense, personal shots of the chaos of a battlefield, unbelievably powerful moments of the leads, and Sansa Stark, the most shit-upon character in Game of Thrones, finally gets to take brutal vengeance upon the greatest monster the show has ever had (and I’m including the Night King).

It’s not an episode that teaches any real kind of lesson or reveals any deep truths to the viewer, but a lot of episodes on this list don’t do that, even high-ranking ones. Sometimes, television is just about showing you something that you can’t see anywhere else, and this episode is all of that and more.

One thought on “Reader/Author Bonus: Battle of the Bastards (Game of Thrones)”