I had seen this movie before, but it was on a date, and I only half-remembered it, so I am very glad that I got to see it again.

Some of the notes may be confusing, because I watched this first, before watching the original, but I’m posting this second. You’ve been warned.

Alright, so, this is the fabulous musical parody of yesterday’s decidedly non-musical glimpse into depression-era fearmongering. You’d think that the premise was ridiculous enough that it could just be played straight with some songs and it would be hilarious, but no, they decided that the movie needed to turn everything up to 11.

Alan Cumming plays multiple roles in the movie, including the lecturer from the original. However, now he’s not the principal of the school, but a traveling orator on the evils of marijuana that shows people the film within the film. Also, rather than just bookending the film, it cuts back to him shutting down anyone in the audience who questions the logic of the movie, usually by accusing them of being communists. I’d remind you that the movie takes place in 1936, which is right after the US actually recognized the sovereignty of the Soviet Union, and in between both of the Red Scares, so that’s a little anachronistic, but whatever, it’s f*cking hilarious. 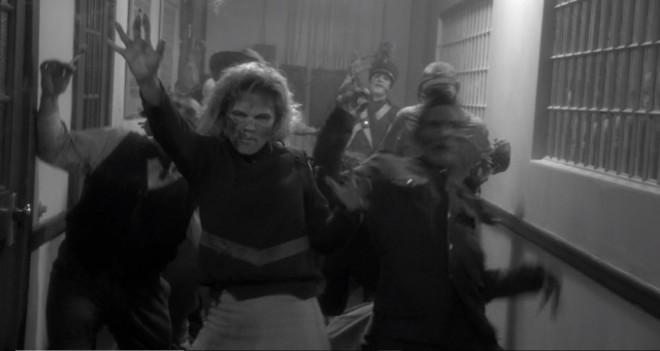 So, the “educational film” starts, and it’s a simpler version of the original. Jimmy Cooper (Christian Campbell) is in love with Mary Lane (Kristen Bell), and they’re the All- 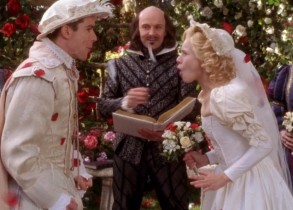 American boy and girl. Unfortunately, that includes being All-American educated, which they reveal when they sing “Romeo and Juliet,” whose lyrics demonstrate that they both have not read the play, nor ever heard of it before, aside from being a love story. Oddly, the William Shakespeare that appears during the song apparently has, as he keeps trying to correct the inaccuracies. They ignore him, possibly because he has a pedo-stache.

After the song, Alan Cumming comes onscreen to comment on the nature of “reefer dens,” and to conjure f*cking fire, something that would be a much more interesting movie. That definitely needs to be in the sequel. He then cuts to Mae and Jack (Ana F*cking Gasteyer and Steven F*cking Weber), the owners of the local “reefer den.” Mae is a “marijuana addict” who can only get through the day with “the stuff,” which she tells us in song. Now, I can say that I must have been pretty distracted during the song “The Stuff” the last time I watched this film, because, while I remember the multiple references to Jack beating her regularly and abusing her, I don’t remember Mae just shouting out to the street that Jack gets stoned and rapes her. Also, the street only really seems to mildly care about it before going back to work. Was spousal rape really so accepted in the 1930s? *Checks statistics* Well, shit.

So, Jack decides to go to sell some dope to the kids, which takes place at Miss Poppy’s (Neve Campbell) Five-and-Dime, where Mary and Jimmy are located. There, the lecturer appears to deliver a warning that swing music is a gateway drug to marijuana. Mary asks Jimmy to a school dance, but Jimmy is hesitant because he can’t dance. Jack offers Jimmy “swing lessons.”

So, Jimmy goes back to Jack’s Reefer Den and meets Ralph (John “Cryptkeeper” Kassir), the insane stoner, and Sally (Amy Spanger), the slut, before having his first joint. Also, when Ralph and Sally smoke, the furniture breaks, which makes me believe that they have some really strong pot.

So, Jimmy’s high is an amazing scene. It’s basically an elaborate Polynesian-style dance number where everyone is either a nearly-naked hot woman or a nearly-naked ripped man. Also, the Pot Devil shows up, and he’s apparently pretty hung. So, apparently, pot makes your d*ck bigger and surrounds you with beautiful people who want to have sex with you. If this movie was serious, it would be sending exactly the wrong message.

Jimmy breaks into the church to rob it, because pot, and has a vision of heaven where a pretty well-built Jesus sings a song to him, which, similar to the pot fantasy, is filled with mostly naked women. I guess that balances it out? At the end of the song, Jesus asks Jimmy to come back to God and Jimmy says he’s got a new god now… REEFER. Even the devil spit-takes at that line, which is hilarious.

So, Jimmy takes Sally on a ride (both metaphorical and literal). I’m gonna pause here to mention that Sally has sold her baby to “the Chinese” who are apparently going to eat it. I’m probably going to hell because my note here is: “So, the Chinese eat white babies. Is that because, when they eat their own, they’re hungry again an hour later?”

Jimmy kills a pedestrian, and Sally leaves, leaving Jimmy to return to Mary, debating if he loves her more or the pot. The fact that her name is Mary Lane (in both this and the original) makes the song obvious (Mary Lane vs. Mary Jane). Jimmy picks Mary, but decides that, to keep her safe, he should leave town. Mary tries to come with him, but when she goes inside, Jack gives Jimmy a pot brownie, which sends him through a cartoon sequence that… well, sucks. Sorry, movie, but that was pointless. You should have put more Cumming fire-crafting instead.

Also, one of my notes is “Pretty sure one of the gimps has butt implants.” This might be my favorite sentence ever.

Jimmy comes back and starts a fight with Ralph, which results in Mary being shot by Jack when he tries to break up the fight. Jack frames Jimmy, while Mary dies in his arms, clearly not having read “Romeo and Juliet” since the first song. Jimmy gets arrested, convicted, and sentenced to be executed the next day.

Ralph starts to feel guilty and hallucinate Mary in Hell, and more zombies. Then, he starts to get the munchies while with Jack, Mae, and Sally. Jack and Mae go to get Chinese, but when they return, they find that Ralph has become so hungry that he has eaten Sally. Jack kills him. Mae then realizes what pot is doing to her life and murders Jack. She then goes to see President Roosevelt, who is visiting the town, and gets Jimmy a pardon. Jimmy, Mae, President Roosevelt, George Washington, the Statue of Liberty, and Uncle Sam all sing about the importance of telling the truth, while simultaneously telling a long series of blatant lies and stating that the next step is to ban immigrants, jazz, evolution, pornography, and homosexuals.

The lecturer then leads the town to burn all of its pot, while explaining that “When danger’s near, exploit their fear, the end will justify the means!” Which basically makes the movie timeless.

What’s really weird is that the movie actually manages to make a pretty good point about exactly the kind of stupidity and jingoism that led to the first movie. If you’re not willing to be honest about dealing with drugs, you’re not going to be effective in combating them. The 30s, the 60s, the 80s, all of them had anti-drug movements that MADE MORE PEOPLE DO DRUGS. You can’t just rely on “the end justifies the means” to get people to change their behavior, because that will either A) mean that you’re forcing a change that isn’t necessarily the optimal one, or B) you’re completely undermining other established systems (like science, logic, or political integrity) in order to make one point.

The movie’s on Amazon Prime, so hit it!

Link to the Archives.

Preliminary notes: Sober. Fed. Watching with a person who actually did a performance of this musical, so bracing myself for singing. Ready to rock and roll.

9:51 –  Opening laughter is as hilarious as I remember. Saw a guy laugh like that during a deposition, but he was on Meth and talking about “Yankees thinkin’ they know how to doctor us.”

9:53 – Alan Cumming’s smile always makes me consider that he is equally likely to hug me or remove my kidneys with a spoon.

9:56 – Title song’s zombie sequence is f*cking brilliant, but the fact that the walls of this schools are all about a half-inch thick makes me question what building codes were like in 1936.

9:59 – Not to nitpick, but adults in with near-adult kids in 1936 wouldn’t have smoked “harmless” cigarettes as kids. Also, “Reefer Stick” remains my favorite term for a joint.

10:12 – “When Jack gets stoned and rapes me.” Oh good, a rape joke. I needed to question whether I could laugh in the middle of a musical number in a comedy. Thanks. Also, I’d completely blocked out this line, apparently, because that just caught me full in the f*cking face.

10:15 – “E-flat Dillinger” is also going into the lexicon as soon as I understand what it means.

10:17 – Only one of the dancers is looking at the camera during the entire routine.

10:21 – Did pot just cause furniture to lose structural integrity? Because that is some f*cking good pot.

10:27 – Okay, so, you’re trying to turn people off from pot, but getting stoned apparently is a Bollywood number filled with hot women and ripped men? I’m getting mixed messages and tickets to Colorado.

10:37 – I love that even as an insane criminal stoner, Jimmy still wears a tie and a vest.

10:39 – James Fennimore Harper? Was that a f*cking literature reference? I didn’t come here to think, movie!

10:41 – Okay, so, at least they balanced it out with a ripped Jesus and a heaven full of hot angels. Gotta get the kids back in church.

10:44 – I think it’s hilarious that even the Devil spit-takes when Jimmy says that he’s got a new God now.

10:46 – So, the Chinese eat white babies. Is that because, when they eat their own, they’re hungry again an hour later?

11:06 – Pretty sure that Mary just checked her hair where there wasn’t a mirror.

11:28 – Pretty sure one of the zombies was a Red Sox player. Director must have been a Yankees fan.

11:30 – SOMEONE STRAIGHTEN THAT F*CKING PAINTING.

11:31 –  Thank you, subtitles. I would not have guessed this was “Suspenseful” music.

11:34 – Wait… the president can’t pardon a murderer, only a governor. I have found a flaw in your logic, movie. The first chink in your armor of perfect logic.

11:35 – Jimmy was convicted and set to be executed within a day of committing the crime. Man, the justice system used to be efficient.

11:39 – The statue of liberty needs a big stripper pole. The true message of the movie.

11:42 – “When danger’s near, exploit their fear, the end with justify the means!” Well, fuck, that’s always going to be relevant.