Top of the Afternoon to Ye! For whatever reason, I didn’t think about writing a list of these until today, so I just cranked this out as fast as possible after oversleeping massively.  But, here you go:

Michael (Steve Carell) gets angry at Jo (Kathy Bates) for making him work late and upsetting his St. Patrick’s Day plans. After repeated escape attempts, Michael finally just tells Jo that he’s letting everyone go home, to which she, surprisingly, complies, showing respect for him for the first time.

Meanwhile, Dwight (Rainn Wilson) has been using Jim’s (John Krasinkski) and Pam’s (Jenna Fischer) desks while they have been on parental leave to make a “MegaDesk.” When Jim returns, Dwight tries to guilt him into leaving so he can have his MegaDesk back. Jim does leave and spends more time with his baby, but stacks four desks into “QuadDesk,” which forces Dwight to keep everything in about a 6 inch gap.

Alright, this one doesn’t have as much Irish spirit as some of the others, but since it’s about all of the things that eventually replace St. Patrick’s Day (work, kids), it’s still a pretty good episode. 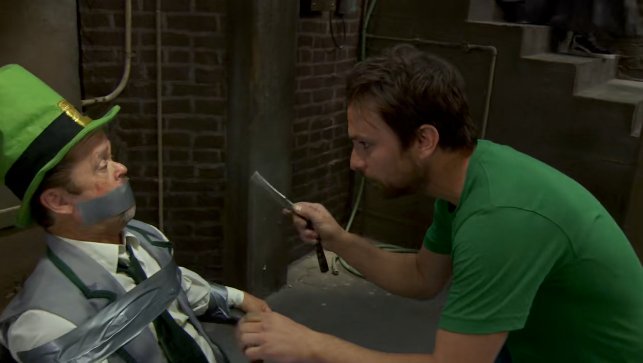 It’s St. Paddy’s Day at Paddy’s Pub, and the Gang is trying to make some real money. Dennis, Dee, and Frank (Glenn Howerton, Kaitlin Olson, and Danny DeVito) take off in the “Paddy’s Wagon,” a bar contained within a van, but their inability to ever cooperate or think things through leads all the customers to get upset, which, in turn, leads the three to start robbing all of their customers and abandoning them out of the city limits.

Meanwhile, Charlie (Charlie Day) and Mac (Rob McElhenney) are watching the bar, but they quickly become distracted when Charlie catches a little person in a leprechaun costume (Kevin Thompson). After Mac leaves (for a gay bar), Charlie, who has been drinking paint mixed with alcohol, believes this to be a real leprechaun, and starts torturing him (Reservoir Dogs style), until the rest of the gang returns to stop him.

Basically, this episode is just the Gang ruining a bunch of people’s attempts to have a good time, but they’re also ruined by people robbing their bar when they leave it unattended. So… happy holiday about drinking? 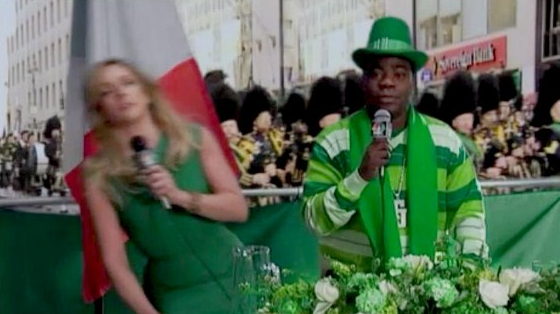 30 Rock fans probably thought that this was going to be the episode “St. Patrick’s Day,” but screw that, this episode’s more fun.

While hosting the St. Patrick’s Day parade, Jenna Maroney (Jane Krakowski) and Tracy Jordan (Tracy Morgan) drink too much, causing Jenna to pass out and Tracy to violently swear on live TV.  However, after realizing that he can just pay all of the FCC fines, Tracy keeps swearing on TV. When sponsors drop out, Tracy just buys all the advertising time himself.

Liz Lemon (Tina Fey) is unable to deal with it because she’s stuck on the jury for the trial of a woman who worked in a similar capacity to Liz and ended up snapping and burning the building down. Jack Donaghy (Alec Baldwin) is attempting to find the name for a small portable microwave, and Kenneth the page (Jack McBrayer) suggests the “Funcooker” as the only universally non-offensive term for it. However, Tracy, now acting with impunity, moons the world while calling his ass the “Funcooker,” ruining the name and the network. Liz returns to find the chaos, and then accidentally starts a small fire, which scares everyone into compliance.

This episode shows the fallout that can come from bad St. Patrick’s Day decisions, so make sure that you drink slightly less than Jenna and Tracy.

2) Hoss and the Leprechauns (Bonanza) 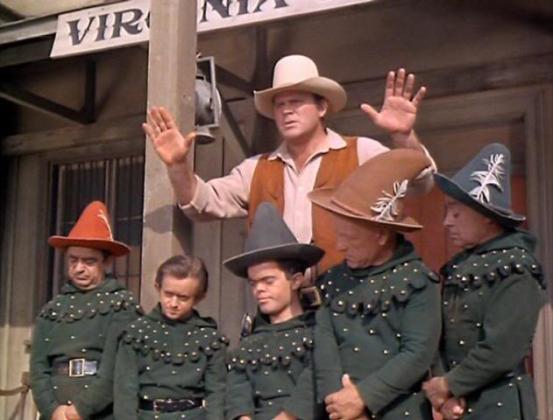 Alright, so, this might be a jump-the-shark moment, but this is a hell of a funny episode of Bonanza.

Hoss Cartwright (Dan Blocker) is in the woods when he finds a bear that has treed a small man wearing green in a funny hat. Hoss scares the bear away, saving the man, and then finds a small box filled with gold. Hoss immediately suspects that it was a leprechaun. When he returns to town and the Ponderosa, no one believes him about the  leprechaun, and the gold disappears. However, at the same time, an Irish professor shows up and confirms that there are indeed leprechauns and pots of gold in the woods, leading everyone to go treasure hunting.

After finding a bunch of little people, it’s revealed that they’re all carnies who staged a rebellion and robbed their crooked boss, who is disguised as the Irish professor. This episode is a pretty hilarious farce, with even the audience doubting whether or not they are real leprechaun.

1) Homer vs. The Eighteenth Amendment (The Simpsons)

This is one of the best episodes of the Simpsons. It was destined to take this spot from the beginning. For those of you who point out it only starts on “St. Patrick’s Day,” shut yer gobs.

On St. Patrick’s Day, Bart accidentally gets shot with a beer cannon, resulting in him stumbling around drunk on television. A moral outcry leads the city of Springfield to finally enforce their 200-year-old law banning alcohol. However, Chief Wiggum is too corrupt, resulting in the city calling in Dick Tracy-esque Rex Banner (Dave Thomas), who proceeds to wipe out the mob and the speakeasies. However, Homer, die-hard alcoholic that he is, digs up all the buried beer in the dump, then sets up a system to supply the alcohol to Moe’s Tavern through a series of underground tunnels at the bowling alley.

Homer, now known as the “Beer Baron,” eventually runs out of beer and starts making his own alcohol. When Marge finds out, as opposed to being mad, she is impressed at how clever Homer is being. Eventually, though, Homer feels bad for Chief Wiggum’s unemployment, and turns himself in to the former Chief so that he will get his job back.

Homer avoids the punishment for brewing (which is “catapult”) after it’s revealed that the law was actually repealed 199 years ago. When Banner tries to criticize the drinking, he is catapulted out of town. The episode ends with one of the best lines in TV history:

To alcohol! The cause of… and solution to… all of life’s problems.

Thanks for reading, drink responsibly. Or don’t. I’m a blog, not a cop.