Some episodes on this list are here because they touch the soul, or address deeper concepts than even most books would dare. Gonna be upfront: this isn’t one of those. Some are on here because they expanded the medium of film in new, inventive ways. Again, not really this episode.

This episode is on here because it is just one single joke. It just happens to be one of the best jokes that humanity has ever written, and it’s one that we perpetually keep coming back to. I don’t know if it was the first show to do it, but I know it’s the first one that did it this well.

While I usually don’t provide much in the way of Spoiler Warnings, especially for shows that are 50 years old, I’m going to say the following:

This episode is highly dependent on being built up to one of the best moments in TV history. If you can take the time to watch it, I encourage that and you can find it on CBS’s services. If not, then, here we go.

The Honeymooners was already on this list, but here’s the summary again: Ralph Kramden (Jackie Gleason) is a Brooklyn bus driver who always dreams big, but generally doesn’t want to work hard to achieve it. He also has a tendency to get very nervous when he actually has an opportunity to get somewhere, usually leading him to messing it up in a comical way. Ralph’s wife, and verbal sparring partner, is Alice (Audrey Meadows), who Ralph usually fights with, and loses to, until he utters a variation of his famous phrase, “one of these days, Alice, bang, zoom, straight to the moon,” to which she almost invariably replied “Ahhh, shaddup.” Some people will be upset that joking about beating your wife was still acceptable in the 50s, but, to be fair, Ralph never laid a hand on his wife, nor did she believe that he would. That was just their dynamic, for better or for worse. She was sassy and sensible, he was emotional and kind of stupid. It carried over pretty directly into the Flintstones.

Rounding out the cast is Ralph’s best friend and neighbor, Ed Norton (Art Carney), who usually gets dragged into Ralph’s schemes because he’s friendly, loyal, and, while he has a number of talents, is only moderately smarter than Ralph, if at all. Ed’s wife, Trixie (Joyce Randolph), is Alice’s best friend, and is a sweeter, friendlier, happier version of Alice, much like her husband is to Ralph. 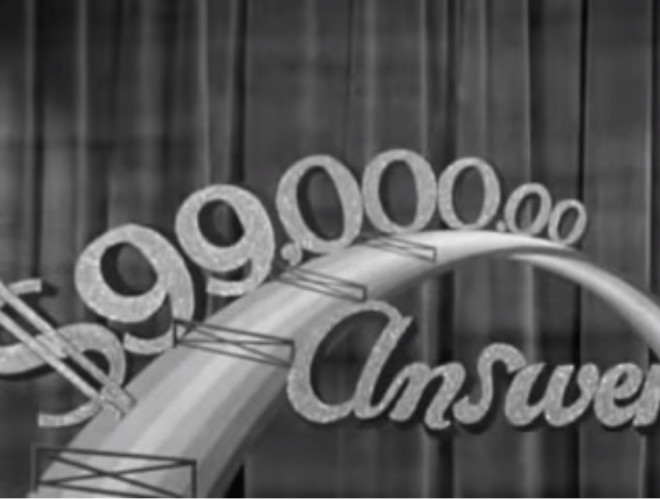 In this episode, Ralph gets invited onto “the $99,000 Answer,” a game show modeled after “the $64,000 Question,” which was popular at the time. Now, it’s important to note that this episode took place in 1956. Quiz shows had only been deemed legal by the US Supreme Court in 1954, because previously they had been thought to constitute a violation of Federal gambling laws. So, this was about as fresh of a concept as anyone was going to get. In the real world, the show had just become the focus of national news, because Joyce Brothers, who later became an advice columnist, had just become the first woman to win $64,000, by picking “boxing” as her category. (AND DOMINATING IT). 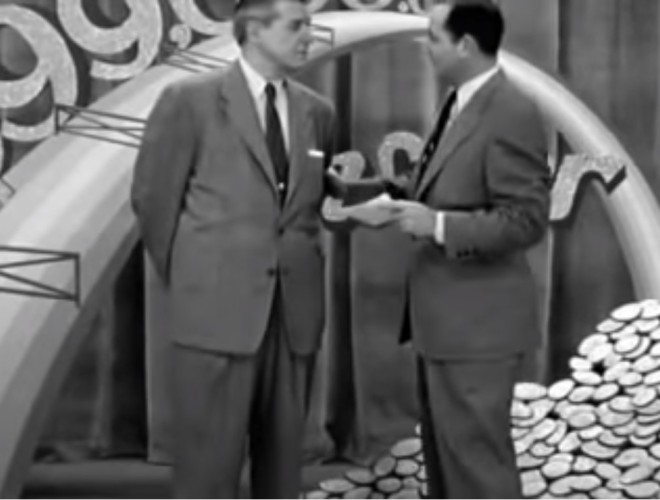 The premise of the game show is that you can select a category, and then you will answer a series of questions with the money increasing every time (first $100, then $600, then some amount, then the fourth question is worth $6187.50, then each question doubles until you get to $99,000). The general rule, repeated throughout the episode, is that the first two questions are going to be easy. After the fourth question, you return every week to answer only one question until you get to the end, but you are always given the option to stop and keep the money you have, because you might lose it all if you try and miss.

As the show starts, we are shown a man who is on the show at the $49,500 level, answering the question “How many times does 1 appear on the Dollar bill, either in numerical or verbal form?” He answers “25,” which is apparently what they want (it’s not correct in real life now, and wasn’t in 1956).

Then Ralph is brought on, and he is clearly very nervous. He stammers frequently, he can’t answer biographical questions, and the host is openly working on trying to calm him down. Finally, he picks his category from the list, “popular music.” However, before he can start, the announcer tells the host that they’re out of time, so Ralph will have to come back next week.

Ralph then tells Alice at home that he’s going to win the $99,000. Alice, predictably, tells him that after the first two questions, they get pretty tough, so she’d be happy with the $600. She and Ralph battle back and forth over Ralph’s intelligence and ability to handle the pressure of being in front of a large crowd while on the spot. Ralph insists that he’s going to spend every waking minute of the next week studying popular music. He’s going to exhaust their savings on records, books, and sheet music, and he’s going to have Ed come over and play every song he knows on the piano, so that Ralph will absolutely be prepared to win the $99,000. Alice, of course, tells him that it’s foolish to spend all their savings on such a wager, but Ralph is determined.

True to his word, however, Ralph does spend the entire week studying. He takes advice from local experts, he listens to records non-stop, and he has piles of sheet music and notes throughout the apartment. When Ed shows up, he quizzes Ralph, who answers absolutely everything about the songs, the composer, the year, the studio, the performer, the b-side, where it was first performed, what movie it’s been in, etc. Then, Ed starts to play older music on the piano, so that Ralph can memorize the songs. However, Ed has a strange habit before he can play any song. He always plays a few notes, the same notes every time, because that’s the only way he feels “warmed up.” However, no matter what Ed plays, Ralph names everything that he comes up with.

Ralph comes back on the show, and, much more confident, is eager to begin. The host explains the game, but Ralph, confidently, says that he’s going to go straight for the $99,000. He won’t even consider stopping after the first two questions, like his wife told him to. 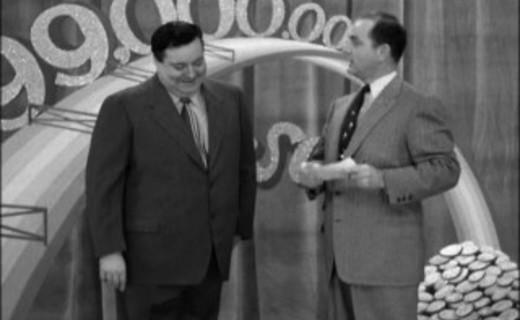 Then the game begins.

The first question is “Who is the composer of Swanee River?” The first few notes are played so that Ralph knows the song.

Okay, so, if you have watched the episode, you probably recognized something earlier. The “little ditty” that Ed plays every time before he begins playing the piano, is the first few notes to Swanee River, one of the most recognized songs in the United States.

With only a few seconds left, Ralph, recognizing the song, but panicking, says “Ed Norton?” (The answer is Stephen Foster, but don’t feel bad if you missed it. If this was the 1950s, it’d be like asking “Who sang Ice Ice Baby?” in the 90s. If you didn’t get that, then feel bad).

Ralph, broken, starts to spout off all the music knowledge he’d acquired over the last week, until he’s dragged off the show.

Like I said, it’s built up to one joke. In this episode, by the end of the week, Ralph knows everything there is to know about the music of the time, except for one thing. It just happens that the easiest, most gimme question there is, is the one thing he didn’t review. He fails, we laugh, roll on snare drum.

So, why is this one joke up here so high on the list? Because it’s a joke that we have all been the butt of at some point or another. It’s a piece of information that seems so basic, but you somehow don’t know it. Like Ralph, it might even be in a subject in which you have a huge amount of knowledge, but you just missed that one ancillary detail. I once heard a Civil War lecturer who could describe every General and every battle that took place in Virginia, but who completely blanked when asked what the “E” in Robert E. Lee stood for (it’s Edward, literally the most obvious answer). I’m sure he had said it a thousand times, but he just blanked. It happens to everyone, at least once. This episode just happens to show the average person’s nightmare scenario: when it happens in front of a huge number of people, while you’re the focus, and when you feel confident right before the question. Comedy is born from tragedy, and this episode is a tragedy that everyone relates to, so the laugh is only that much bigger. 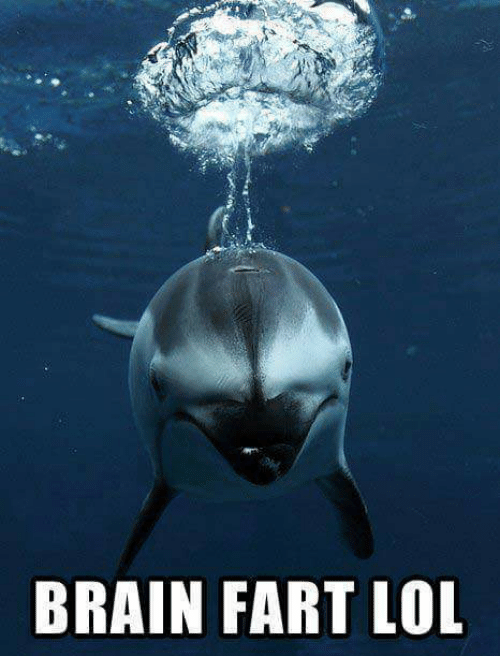 That’s not the only thing that we have in this episode. There’s actually a few decent lessons woven into this narrative, and, as a good story does, makes them ring true. In an earlier review, I pointed out that one of Ralph’s biggest problems is that he doesn’t work hard enough to ever really succeed. Well, in this episode, it’s hard to believe that Ralph could have worked much harder to win this game show. He spent all of his money, he dedicated his entire week to this, and there’s no arguing that he hasn’t benefited from it. So, what really sinks him? Like many people, it’s not listening to his spouse. Alice is the levelheaded one for a reason. She points out that Ralph should just focus on winning the $600, so that they can get something, but Ralph is so focused on the big prize, the really tough questions, that he doesn’t even think to prepare for the easy ones. He takes them for granted, and it bites him in the backside. Again, this is something that almost everyone suffers from, looking so far ahead when we have a dream that we stumble on the first step.

Like I said, it’s a single joke. But it’s a damned good joke.