It’s difficult for me to describe exactly why I love this episode so much. Lie to yourself all you want, if you’ve watched this episode, you get what I mean. I’ve watched it at least once a year since I was little, and it’s entertained me in completely different ways throughout that time period. But, ultimately, the fact that I’ve watched it more than 20 times and can still dependably turn it on and laugh at it, even knowing all the jokes, the lines, the set-up, and the payoff, is a sign of how brilliant it is. The worst part is that, on some level, you know you’ve done exactly what is done in this episode: You’ve formulated some great idea… only to find out that it was based on a fundamental misunderstanding of something. It’s like when a kid says “Why don’t we give everyone one trillion dollars? Then everyone will be rich.” It sounds fun on paper, but the reality is… well, just ask Zimbabwe how that works out.

WKRP in Cincinnati probably is mainly remembered because of this episode. I don’t mean that the rest of the show wasn’t good, it absolutely was, but this episode was so iconic, so memorable, so original, and so bizarre, that it is definitely part of what saved the show. See, when WKRP first came out, it didn’t do well competing against Welcome Back, Kotter and Little House on the Prairie. In fact, CBS pulled the show off the air after just 8 episodes. However, the fan response to the show was so positive, owing in no small part to the fact that this episode had aired just before it was pulled, that the show was brought back and ran for 3 more seasons. When the show was brought back for Syndication, it was one of the most successful syndicated shows in the 80s and early 90s… until it had to be pulled again because the licensing on all of the music ran out. IP rights can be really dumb sometimes. But, the point is, this show wouldn’t have been able to do any of that if it wasn’t for this episode making enough of a splash to save the show the first time around. 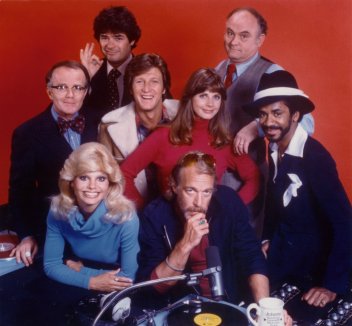 The premise of the show is that WKRP is a struggling radio station in a city, the name of which you should be able to guess by now. Andy Travis (Gary Sandy) is brought in as the new Program Director at the beginning of the series to change the station from Easy Listening over to Rock ‘n’ Roll. The rest of the cast is the staff of the radio station: Arthur Carlson (Gordon Jump), the incompetent manager who only has his job because his mom owns the station; Dr. Johnny Fever (Howard “Yes, I would lie in exchange for weed” Hesseman), a DJ who has been fired from most of the good radio stations for misconduct; Jennifer Marlowe (Loni Anderson), the gorgeous station secretary who is both the highest-paid and the most intelligent person on staff; Venus Flytrap (Tim Reid), the soulful night and evening DJ; Bailey Quarters (Jan Smithers), the young woman in charge of billing and station traffic, and later a reporter; Herb Tarlek (Frank Bonner), the account executive who manages to sell ad space for ridiculous products; and Les Nessman (Richard Sanders), the uptight reporter who is so incompetent that he rarely gets the names of celebrities right, let alone the headlines, but has somehow won five “silver sow” awards for reporting on hog shows.

The episode begins with Jennifer doing her job in the best way possible: By not allowing any real decisions to be made by Mr. Carlson. Unfortunately, she makes it a little too obvious that she’s doing all the real work this time, resulting in him taking notice. Then, when Mr. Carlson asks Herb how sales are going, Herb accidentally implies that Mr. Carlson was screwing up constantly until Andy showed up.

Mr. Carlson decides to go around and re-assert his authority, but it fails spectacularly: Johnny feigns being asleep, the advice he gives to Bailey is woefully uninformed, and Venus barely registers his presence. Carlson goes back to his office and plays with his office supplies until Andy checks in on him. Andy tells him that everything is going well with the station, but Carlson asks to be more involved. Andy tells him he’ll do what he can.

A day or two later, the staff are all coming to Andy begging for him to tell Carlson to go back to the old system of… not actually doing anything. Carlson’s attempts to get involved in the workings of the station have just been sabotaging everyone… and offending Venus Flytrap, who has apparently been getting offers of watermelon from Carlson. Venus is Black, in case you didn’t already guess that this was a joke that could only be made on network TV in the 70s. Now, you’d probably have to do cable news to find that level of casual racism.

Carlson announces that he has a secret promotion and requests help from Les and Herb, who, as the suit-wearing older men in the station, Carlson considers to be part of the “old guard.” They’re told that they need complete secrecy and 20 live turkeys.

The next day, the staff are still in the dark about Carlson’s plan. Carlson asks Jennifer to type up a press release, however, Jennifer’s contract says she doesn’t take dictation. He then says he’ll type it himself, and asks her to grab coffee. Her contract likewise says she doesn’t have to make or fetch coffee. This is the 1970s, so… I’m gonna say feminism win? Or is it a loss because, despite being the most intelligent person in the office and the one who actually keeps the station running, she’s still technically a secretary… who is paid more than the rest of the station? Whatever, Jennifer Marlowe is awesome. Detour over. 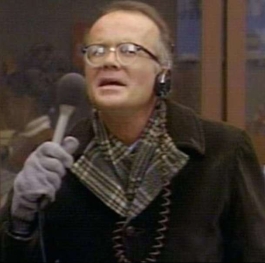 The staff reminisces about the past promotions which Carlson has tried, including “The Great Wig Giveaway,” which failed so spectacularly that Carlson had to donate the leftover wigs to the Red Cross after the 1976 earthquake in Guatemala. Johnny then goes live to Les Nessman, who is ready to broadcast the details of the mystery turkey giveaway from the Pinedale shopping center. As Les starts, he is accosted by the owner of the supermarket from whose lot he is broadcasting. Les moves into the open, but he still isn’t sure what is going to happen.

Alright, so, few things are funnier than the following sequence. I’ve seen it 30 times, and I have never stopped laughing. If you’re watching on the full-episode link, it’s at about 18:30. Or, here you go:

The key is that the camera only shows Les and the listening station crew, and never what is actually happening. The fact that it’s only reactions makes everything all the more real, because it’s as if we’re hearing the live broadcast ourselves.

Les sees a helicopter coming in with a banner attached saying “Happy Thanksgiving from WKRP.” Then, he sees a dark object drop out of it. Then another. Then another. They’re turkeys, crashing from 2000 feet onto a crowded parking lot. Les describes it as a tragedy not equaled since the Hindenburg, as the turkeys fall to the ground. Then, Les cuts out, and Johnny announces that the Pinedale Shopping mall has just been “bombed” by live turkeys.

In the next scene, Jennifer is talking to the Humane society, and uses the great line “A lot of turkeys don’t make it through Thanksgiving” to justify it. Venus demands that Andy stop Carlson from ever doing a promotion again, and Andy stops him, saying that Carlson has been here a long time, and just wants to be part of things, and that’s not the worst thing.

Then, Carlson and Herb return, suits shredded and covered in turkey feathers. Carlson says that he’s fine, and heads to his office. Jennifer offers to get him coffee (the only time ever). Andy tries to convince Carlson that it was at least a unique promotion. Carlson, frustrated, says that he thought it would work. He says that he’d planned the whole thing, down to the last detail.

Les then makes his way into the office, in shock, talking about how some of the surviving turkeys and the victims attacked him.

Carlson then comes back out and says one of the best lines in TV History:

“AS GOD IS MY WITNESS, I THOUGHT TURKEYS COULD FLY.”

For the record, this episode is based on the WQXI Turkey Giveaway, where the station manager took an 18-wheeler filled with live turkeys and threw hundreds of them at people in an Atlanta Shopping Center. Somehow, the fact that this is based on reality makes it all the more unbelievable. 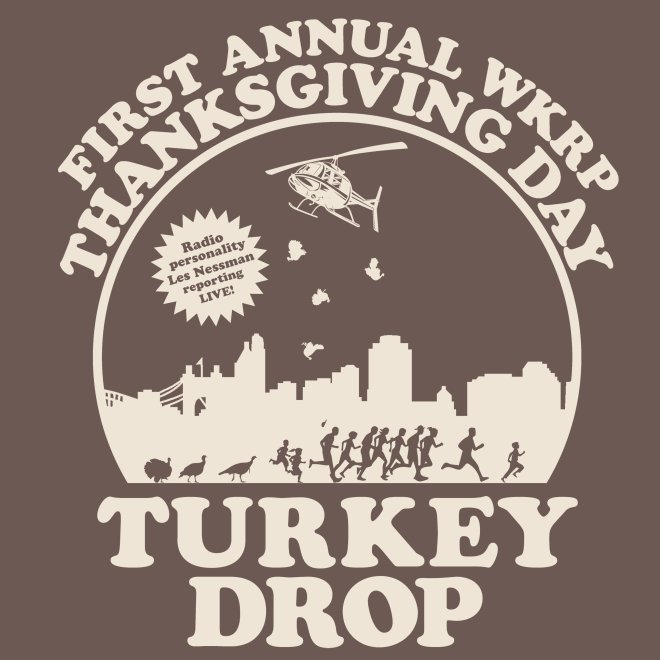 Okay, so, why is this episode so good? Really, it’s the last line, because the last line somehow brings a wonderful clarity to this chaos. It tells you exactly why Carlson could put so much effort into the promotion and still screw it up so spectacularly: Because it turns out you can’t throw a live turkey out of a helicopter. Then, after that fails, he landed the helicopter and tried to just turn them loose… at which point, in Les’s words, they organized a counterattack.

It’s a fundamental mistake of fact. Something that we assume is correct because we’ve believed it for so long that we never thought to question it. It could be something as simple as “I have the right to one phone call after an arrest,” to something as complicated as “Columbus was the first person to believe the Earth was round.” At some point in everyone’s life, you will find that one of these is wrong… and hopefully it won’t be right after you spent a ton of time formulating a plan based around it.

This episode contains a hilarious failure, which is the subject of many comedies on this list, but this one is made all the better because not only is it caused by a single fundamental error, but it’s one that a ton of people would probably also make (and, by the way, wild turkeys can fly to a degree). The fact that we don’t ever see the incident, but only hear about it and see the fallout and the reactions makes it all the more spectacular in our minds. Really, it’s an amazing amount of comedy crammed into 24 minutes, and, even watching it again for this review, I love it just as much as I ever have.

4 thoughts on “4) Turkeys Away (WKRP in Cincinnati)”