Tales from the Crypt was a horror anthology show and, honestly, it wasn’t the best one on its face. However, it did have some things going for it that set it apart. First, it was on HBO, which allowed the show to feature graphic violence, sex, the good swears, and nudity. Second, it had The Cryptkeeper, and John Kassir’s voice gave that puppet the perfect amount of creepy joy at telling people tales of terror. Third, great intro. If you watched the show, you can hear it in your head right now. Or watch it here:

Last, and possibly most importantly, the show managed to snag an insane number of guest actors and directors, and some pretty big names playing outside of their normal comfort zone. One episode is the only time that Isabella Rossellini ever agreed to portray her mom, Ingrid Bergman, on film. Another episode was directed by Arnold Schwarzenegger in one of the only two things he ever directed (Don’t see the other!!!). I have no idea how they got such big names for a tv show, except, oh right, the show was produced by Robert Zemeckis, Richard Donner, and Joel Silver, and it was the late 80s/early 90s. If Steven Spielberg had been involved, I assume that the Emmys would just have been held on the set.

This particular episode took place in the fifth season and, admittedly, the show was starting to run out of steam. The director of this episode was Russell Mulcahy, who was famous for directing Highlander, as well as all of Duran Duran’s music videos. Unfortunately, he was also infamous for directing a movie that supposedly followed Highlander that kind of tanked his career for a decade, despite the fact that he openly disclaimed the movie. Which, I guess, is why he agreed to direct this episode. The writer was Scott Nimerfro (R.I.P.), who was just starting out, but later wrote for Once Upon a Time, Pushing Daisies and Hannibal. So, decent crew behind the camera.

On the other side, the performers in the episode were Bill “I’m Bill Paxton” Paxton (R.I.P.), Brad Dourif, Lainie Kazan, and Michael Lerner, who are all pretty notable B-actors, except for Paxton, who’s an A+. The ingredients were all there for a good episode of schlock horror.

First, I just love the title of this episode. It’s exactly the kind of pun the Cryptkeeper would make. Which, for some reason, he does while dressed as the quarterback to a skeletal football team. I assume the opening was filmed independently of the episode and they just mixed-and-matched. It’s a puppet, you can make it say whatever you want later.

The episode starts by showing us that Billy (Paxton) and Virgil (Dourif) are two criminal brothers planning to rob an Ice Cream Manufacturing Plant. Billy, who has a weird butter obsession to the point of eating sticks of it, has only just gotten out of jail and is clearly the more aggressive of the two, whereas Virgil is fairly meek and kind of dim. Virgil thinks of them as a modern Western bandits, but Billy is more realistic about the nature of their craft.

Billy decides that the pair are going to get some ice cream to put them in the mood for their heist, so they find a local ice cream truck driven by Mr. Byrd (Lerner), a charismatic man who loves to entertain children. Notably, he has a puppet that he can perform with while drinking and eating, apparently independent of him.

Billy approaches Byrd in the middle of a crowd of children, where it’s revealed that Billy went to jail for stealing from the company that Byrd works for, which used to employ Billy. Byrd turned him in, leaving Billy wanting revenge. Virgil tries to talk him out of it, but Billy bullies him into going along with it.

It then cuts to the Ice Cream Plant where Virgil and his friend Cooter (Pat Asanti) are routinely yelled at by their boss, Mrs. Grafungar (Kazan), who apparently has a crush on Byrd. Byrd arrives for his supply pick-up, but is noticeably less confident and charming than he was before. Billy arrives, knocks Cooter out, and initiates the plan, now adapted in order to get revenge on Byrd during the robbery.  Virgil approaches Grafungar in her office, but, after she insults Billy, he stabs her repeatedly with an ice pick. She tries to crawl to Byrd for help, but Billy brutally kills her with a crate-hook to the head. Byrd, assertive again and now sick of waiting, drives off.

Billy finds out that Virgil didn’t get Grafungar to open the safe before stabbing her, so the pair have now committed murder without being able to get any money. They decide to rob Byrd’s truck to at least make a few hundred dollars. Byrd says that it “wasn’t his idea” to turn them in, but Billy tells Virgil to “show him we got ways of making him talk.” This turns out to be a mistake, as Virgil decides that’s code for “blow half of his head off with a shotgun.”

The pair search the house for the money, before Billy finds out that Byrd had kept a fortune in his freezer. He calls for Virgil, but, instead of his brother, a gunshot comes out from the darkness and blows off one of Billy’s legs. Byrd emerges, appearing unharmed, holding a shotgun and Virgil’s dead body. Byrd tells Billy that, while he imagines Billy and Virgil were close, they’ll never be as close as he was to his brother. At that point, Byrd turns to reveal:

He and his brother were conjoined twins.

Yeah, they were conjoined at the back (do not ask about pooping). Each of the brothers operated a different half of the ice cream truck. Earl, the meek brother, drove the truck, while the other brother worked the window. The remaining, unnamed, twin, kills Billy. It then cuts to a few weeks later where Byrd is trying to sell the rest of his ice cream before quitting, but the kids complain that the truck smells bad. It’s then revealed that Byrd’s twin is still attached, and now a rotting corpse. The Cryptkeeper, in his outro, tells the audience that Byrd stayed in the ice cream business, as “Ben and Scaries.” Because pun.

This isn’t my favorite Tales from the Crypt, but it is a pretty great one, because they took a lot of care to make the twist organic. If you re-watch the episode, it’s obvious that, in addition to the dialogue being different, Lerner played each of the brothers as very different individuals. However, since he’s only seen in the truck until the end, you might not have noticed that he only appears while leaning out to one side. 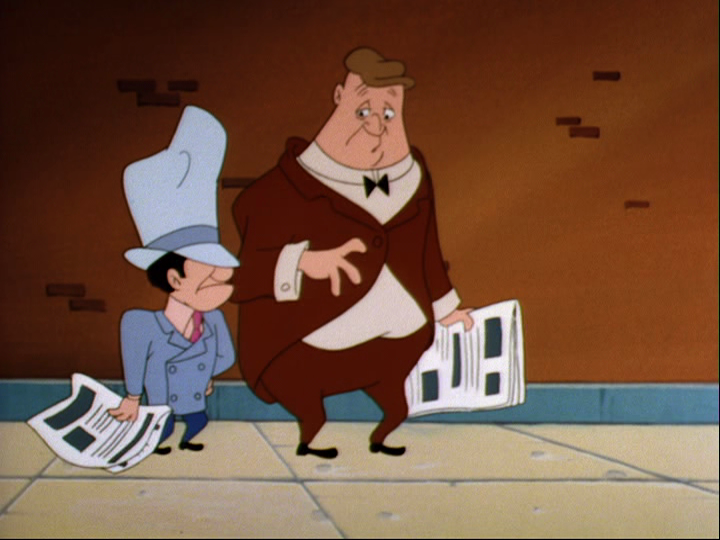 Dourif and Paxton are perfect. Yes, their characters are kind of cartoony, but you’re supposed to be watching a show hosted by an undead puppet featuring an adaptation of a horror comic from 50 years ago. This is exactly what you should be expecting. Paxton’s Billy is so over the top that it almost manages to be charming. Yes, he’s aggressive towards Virgil, but the episode soon shows why: Virgil is by far the more dangerous of the two. Dourif plays Virgil as being so weak and cowardly, but the minute he’s supposed to exert himself, he immediately jumps from 0 to murder. Billy didn’t plan on killing anyone, even Byrd, during the plan. In fact, it’s reveals that Billy’s “criminal history” was apparently just embezzling funds when he was an ice-cream man. His entire criminal façade appears to be significantly less of a real threat than his brother. They come off as a more criminal version of George and Lennie from Of Mice and Men, or a less amusing Rocky and Mugsy from Looney Toons.

he best hint to Virgil’s true nature is that early on, he envisions the pair as being like Frank and Jesse James, who were NOT gentleman thieves, no matter what films try to depict. They were mostly just Ex-Confederates who liked robbing banks owned by Unionists and were fine with killing people, which was good press in Missouri during reconstruction. So, much like Virgil’s image of the James Brothers, Billy has an idealized version of his plan which will be quick and efficient, but the reality is far more gruesome.

The revelation that Byrd is twins allows the Byrds to mirror Billy and Virgil. One of the Byrds is meek, the other is aggressive and confident. However, while Billy’s bullying Virgil into compliance with the plan is apparently what prompts the docile and inept little brother to become a mad killer, it appears that the deceased Earl was the one that kept the living Byrd in line. Now, he’s unbound by his weak morality, and free to be himself! But, since the episode needed a goofy ending, it appears that he doesn’t become an evil mastermind. Just kind of a dick.

Ultimately, this episode is pretty much what is best about Tales from the Crypt: It’s goofy, gory, funny, and just a bit surreal.