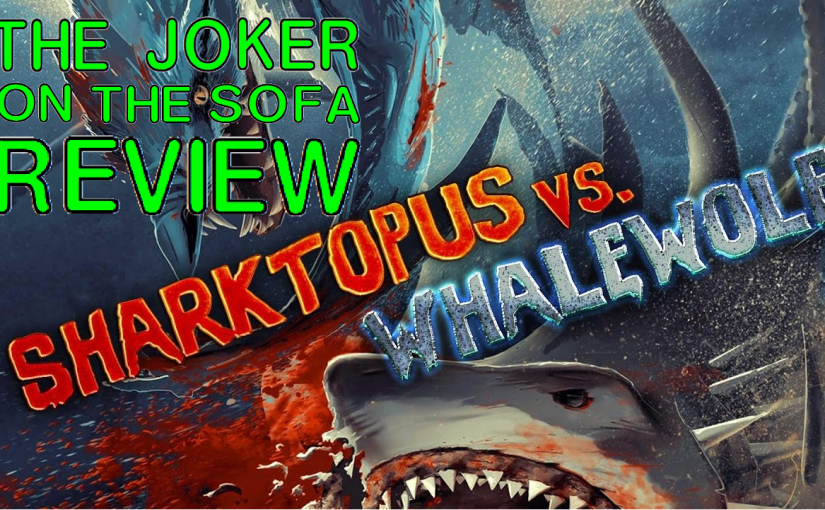 In the pantheon of vs. media, this movie will always hold a special place, for much like Jem, this film is truly, truly outrageous. Unlike Freddy vs. Jason or Alien vs. Predator, this movie doesn’t waste time with “set-ups” or “emotions” or “logical character arcs,” it just shows us what we came here for: A Sharktopus fighting a Whalewolf.

So, this is the third Sharktopus movie. In the first movie, the government asked a mad scientist (Eric Roberts) to build a bio-weapon. He combined a shark and an octopus to create it, making a monster which can walk on land or swim through the sea, and also has spines and sharp clawed tentacles for reasons I can’t remember and don’t want to look up. The movie ended with them blowing up the monster.

10 seconds into the movie, Captain Ray Brady (Casper Van Dien VI) shows up to a funeral, on his own boat, that he is too drunk to attend or remember agreeing to host. Within 30 seconds, Sharktopus attacks the boat. It is now clear that this movie doesn’t believe in foreplay. It’s here for the f*ckin’, so grab the back of the couch and get ready for a ride. Sharktopus eats the coffin for the funeral, then the widow, resulting in Ray asking if they already paid.

It then cuts to Ray in jail for boating while intoxicated and losing the widow at sea. Apparently, the police in the Dominican Republic don’t accept the “Sharktopus got her” excuse after the last three guys made it. Of course, the arresting officer is his ex-girlfriend, Nita (Akari “I played a completely different character in the last movie and no one cares” Endo), who is immediately tasked with tracking down a doctor who has been conducting illegal experiments in the Dominican Republic, Doctor Reinhart (Catherine “I’m literally a princess” Oxenberg). We see Reinhart and her assistant, Nurse Betty (Jennifer Wenger), performing procedures which really seem to be overboard for the Dominican Republic. Hell, they seem overboard for Chechnya in the early 90s. The only person to turn her down is an aging baseball player named Felix Rosa (Mario Arturo Hernandez).

Rosa goes to a bar to hit on two young women but gets shot down and humiliated, leading to him drunkenly returning to Reinhart for her experimental procedure to make him great again. Unfortunately for him, the doctor is, in fact, a mad scientist (which happens a lot in this universe), who decides to mutate his DNA. After the first treatment, Rosa feels great, but quickly demands another, giving himself a blast of radiation, seemingly killing him. Meanwhile, the two young women run into Nita, who watches them get killed by Sharktopus, because that thing can appear out of nowhere.

Ray is bailed out by his first mate, Pablo (Jorge Eduardo De Los Santos), who borrowed the money from a voodoo priest named Tiny (Tony Almont). It turns out that Tiny wants the Sharktopus’s heart in repayment, not because it contains any mystical powers, but because the Sharktopus is trending on social media and Tiny thinks he could absorb its popularity to get laid. Yes, this is an actual thing in a movie that exists and was said by an actor who was paid to say it.

Reinhart kicks Rosa’s dead body into the water, where Rosa begins to mutate. Reinhart takes him back to her lab, where his body is now decayed-looking, having claws with flipper-like webbing instead of hands. Reinhart realizes that the mutation needs another stimulus and, being a mad scientist, decides that it’s the full moon. She exposes him to the full moon, but we don’t see the result.

Ray and Pablo are preparing to kill Sharktopus, but they’re joined by Nita, who forces her way onto the expedition. Back at the lab, Nurse Betty returns to find Reinhart passed out on the couch. Reinhart then reveals that she gave Rosa some blood, but that he needs more, specifically Betty. Rosa appears, now a combination of a killer whale, a gray wolf, and a man, a Whalewolf, and chases Betty through the town and into the ocean, where he eats her. Ray, Pablo, and Nita find the Sharktopus and attack it with a harpoon gun, but this just annoys Sharktopus. It attacks, knocking Nita into the water. When it attempts to kill Nita, however, it runs into Whalewolf, briefly skirmishing, allowing the crew to get away.

Ray returns to the dock to treat Nita and fix the engine that they blew in the escape. The group watches a parody of The Bachelor which is hilariously poorly scripted, and ultimately attacked by Sharktopus, which eats the winning girl. Nita heads to the show’s filming site. At Reinhart’s lab, the doctor tries to housebreak the now lupine-brained Whalewolf, but finds it impossible, so she releases it into the city. At a nearby Rec Center, two gangs are fighting, but are interrupted by Sharktopus and Whalewolf, who start eating the gang members and brawling until Nita and another officer detonate random gas tanks nearby, engulfing them in explosions.

Ray and Pablo are trying to avoid fixing the boat and finding Sharktopus, but Tiny uses his voodoo to force them to go back to work. They apparently try to build a weapon out of household objects, but find that they’re too incompetent to make anything useful. Meanwhile, the Bachelor parody has started filming again, miles away from the last site, but neither of the remaining girls wants to win, based on what happened to the last girl. They believe the winning flowers are cursed. The director grabs the flowers and lectures the girls about being foolish, but is eaten by Whalewolf. Whalewolf returns to the lab, where Reinhart says she’s leaving, because her experiment was to create the perfect human, and Whalewolf isn’t human.

Nita and her partner decide to investigate Reinhart, who is trying to flee the country. She tries to have the local animal shelter adopt Whalewolf, but Whalewolf realizes what’s happening and attacks her. Nita arrives to find a dying Reinhart before being attacked by Whalewolf. Ray gets attacked by Sharktopus and Pablo saves him by cutting off one of Sharktopus’s tentacles. They bring the tentacle to Tiny, hoping that it will suffice, but Tiny instead banishes them from the town, which I guess he can do.

Ray calls Nita to say goodbye, but finds Nita wounded on the other end of the line. They head to the clinic and rescue her from Whalewolf, but it pursues them in a loose Jurassic Park parody. Eventually, they run into Sharktopus as well, resulting in the two monsters battling again, destroying property and killing crowds of people. Nita and Ray make it to the hospital, where they start to look for a way to get rid of the monsters. It’s revealed that Tiny might be able to gain some level of control over Sharktopus using the tentacle which Ray brought, so Ray plans on having Tiny get the two to fight, but it turns out Tiny plans on controlling both of them to take over the island. Tiny tries to have Ray killed, but Ray steals the Sharktopus voodoo doll and escapes using his “Drunken Nut Punch Kung Fu Juju,” which is exactly what it sounds like, if you think it sounds like pretending to be in a martial arts movie and hitting people in the balls.

Nita realizes that, since Whalewolf used to be a baseball player, he’s going to head to the baseball diamond, where she and Pablo set up a giant electrified net and call in a airplane bombing run. Tiny pursues Ray, until Sharktopus arrives and eats Tiny. Thinking he’s controlling Sharktopus, Ray tries to befriend it, but it turns out that he hasn’t figured out how to work the idol and is attacked by the monster, who for some reason is now acting like a cartoon hunter pursuing wabbits rather than the unstoppable killing machine from earlier. It chases Ray to the baseball stadium. Meanwhile, Nita finds Whalewolf drinking out of the stadium toilets and lures it onto the field. The two fight, resulting in Whalewolf throwing Sharktopus into the net, killing it. Ray distracts Whalewolf with a pitching machine until the jets arrive and blow up Whalewolf. Ray and Nita kiss because they can. The last shot is of another voodoo priestess resurrecting Sharktopus from its leftover tentacle.

This movie doesn’t mess around. From start to finish, almost every scene is Sharktopus or Whalewolf killing someone or trying to. Most monster movies believe in a slow build-up, but not this movie. One minute in, it’s got a Sharktopus, 15 minutes in, it’s got a Whalewolf, and they fight for the first time 10 minutes later. The rest of the movie is just humorous set-ups for the two to fight or murder random people.

It reminds me of one of those trends in modernist poetry -or maybe post-modernist- where the poem has all of the extraneous words removed from the lines, causing it to jump directly from image to image. This movie just goes straight to the next scene, often with a jump-cut, and doesn’t try to do establishing shots or anything to give the audience time to adjust. While that doesn’t make the movie very emotional or give any stakes to the scenes, it tries to keep the interest by just keeping almost every scene intense throughout the movie, basically, there’s no rise and fall, since all the scenes that don’t feature the monsters are too short to really allow the audience to relax.

This doesn’t really work as well in film as it does on the page, but it still is at least a pretty interesting way to go about it. Honestly, it might work if the movie was, well, better than Sharktopus vs. Whalewolf. I think it’d be a very interesting structure for one of the more over-used horror models, like an alien invasion or a kaiju attack, but keeping the monsters constantly on the offensive from minute one would be really expensive if you don’t want them to look like crap.

Also, I’m not sure if it’s a reference, but Casper Van Dien’s character is named Ray Brady, which sounds like a play off of ROY Scheider as Martin BRODY from Jaws. Also also, despite the fact that they’re never on-screen together, Van Dien and Oxenberg were married at the time of filming, but got divorced after it aired, which I just find interesting. It wasn’t THAT bad, you two.

Look, this isn’t poetry, and it isn’t even quite as good as Sharknado or Lavalantula, but it still has its good points. Plus, it has Casper Van Dien cockshotting 6 guys in sequence, which is the natural follow-up to playing Johnny Rico in Starship Troopers (kidding, I love that movie). I won’t say it’s worth your time, but if you enjoy SYFY movies, this is definitely one of the more entertaining ones.