The Doctor investigates a definitely-not-owned-by-Jeff-Bezos property.

The Doctor (Jodie Whittaker) receives a package containing a familiar fez from Kerblam!, the galaxy’s largest supplier of consumer goods. Which galaxy, I don’t know, but one of them. Inside the package is a note requesting help, so the Doctor and the TARDIS Trio (I will never stop fighting for this) head to the main distribution center for Kerblam! and sneak in claiming to be new employees. It’s revealed that 90% of Kerblam! is automated, but, by law, 10% of the workers are organic life. It’s also revealed that Kerblam! wasn’t exactly happy about having to hire 10% human workers, because, as the largest employer in the galaxy, they’d rather just use robots. Graham, Ryan, and Yaz (Bradley Walsh, Tosin Cole, Mandip Gill) meet three of the workers in the facility: Dan (Lee Mack), a stock man and literal poster boy for the company who works for his kids; Kira (Claudia Jessie), a member of dispatch noted for her clumsiness; and Charlie (Leo Flanagan), a maintenance worker in love with Kira.

While the Trio is meeting the rest of the staff, the Doctor meets with Judy and Jarva (Julie Hesmondhaigh and Callum Dixon), the HR managers, who deny any involvement in the recent string of workplace disappearances. The Doctor suspects that it may be the plant’s artificial intelligence trying to get rid of all of the human workers or a malfunction. Dan disappears in the middle of an order, leaving behind only the unbreakable necklace he received from his kid. When Kira goes missing, the Doctor tracks her to the main delivery floor, where she finds evidence of numerous murders and an army of delivery robots, called TeamMates, holding packages. The Doctor speaks directly to the Kerblam! AI, which reveals that it was actually the one that called for help, suspecting that someone was trying to kill off the workers and sabotage the workforce.

Yaz, Ryan, and Charlie find Kira just in time to watch her blow up after playing with the bubble wrap, something Charlie clearly knew would happen, even if he didn’t want it. The Doctor realizes that the army of TeamMates is delivering weaponized bubble wrap which will kill millions of people. Charlie reveals that he’s the one behind the plan, believing that if he causes a massive death from the automated workers that people will demand more human oversight and involvement in the company. The Doctor realizes that this was what the AI was trying to prevent and uses the AI to cause all of the TeamMates to pop their own bubble wrap, destroying the facility and killing Charlie who refuses to leave. After the incident, Judy and Jarva resolve to try to rebuild the company with more human workers.

So, it’s the Doctor in a dystopia, which we’ve seen used to varying levels of success in the past. This one is definitely in the upper half in terms of quality, but not the best.

The fact that this is a clear parody of Amazon comes through immediately, but the truth is that Amazon becoming a mostly-automated monopoly and wrecking any number of industries is a completely understandable concern as of this writing (if you’re reading this in the future, Hail Emperor Bezos). So, the fact that they’re basically just showing us a slightly-sci-fi version of a real and imminent problem makes the dystopia feel much more grounded and relevant. The episode even hints at the idea that the corporation is evil or that the technology is evil or that the HR people are secretly evil, then rejects all of the expected answers. They don’t give us the easy message of “big company bad,” but instead they have the Doctor explicitly point out that the system itself isn’t bad, it’s how people use it that needs to change. I give them credit for acknowledging that the service that Amaz-sorry Kerblam!- provides is actually useful and efficient, even if it can be misused in the name of profits.

The supporting characters in this episode are all great. Charlie is a complex antagonist, both because he has real emotions that are unrelated to his plan and because his plan isn’t born out of malice but out of desperation and concern for the future of his people. Is he a terrorist? Absolutely, by definition, but he also is shown to at least have some logical reason to believe what he does, which makes him more than just a mustache-twirling bad guy. Kira and Dan, too, are both likeable and portrayed realistically, both being people who are just trying to do the best that they can for themselves and their families. That’s what makes it so much more devastating when both of them die horribly to Charlie’s plan.

And btw, that’s a pro in my book. This episode was willing to make us like two characters, kill them both off, then got us to kind of understand why the guy who killed them was willing to do it even if he regretted it a lot. And yeah, this is brutal, she’s literally torn apart. 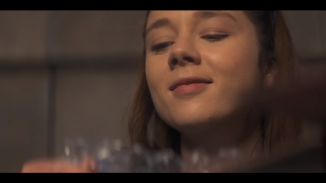 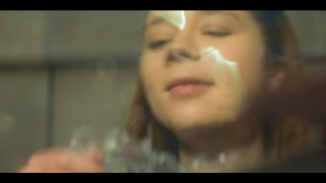 Also, booby-trapped bubble wrap is hilarious and messed up at the same time and just… brilliant.

Now for the cons:

Kira’s death gets mostly overlooked, emotionally. I can get that Charlie is used to making compromise, but he pretty much gets over killing her quickly because the episode is running out of time. I mean, we spent much longer on establishing that he’s in love with her than we spend on him even reacting to his accidentally murdering her.

The designs of the TeamMates joins the “too creepy for the job you gave it” category in Doctor Who robots. These things look creepier than the generation 1 drone that used to deliver everything and I think if one of them showed up at my door I would empty at least 2 rounds into it just out of an abundance of precaution. It helps when they end up doing some creepy-esque things, but since they aren’t the ultimate bad guys and, honestly, are trying to help, it seems like no one would ever have made them look this way.

Everything that’s slightly over-reaching about the company itself, including making employees wear GPS monitors, doesn’t really get followed up on much. I guess because, as the show points out, companies now do that in real life and no one seems to care much.

The finale implies that Charlie’s act of terrorism works and convinces two people to change Kerblam!’s business practices and now people will have jobs and puppies and unicorn wands, etc. This is somewhat unsatisfying in an episode that prior to now had been fairly realistic in how the company had worked. Now, I’m not saying that Judy and Jarva hadn’t learned something, but I am saying that the company is much bigger than them and, if they decided that 90:10 was the best ratio of workers before, the company’s overseers will likely want that ratio back, but with more security. Hell, arguably, they should lobby to get rid of the humans because the AI tried to SAVE people while the human tried to commit MASS MURDER. It just didn’t sit right with me.

Overall, this was a pretty solid episode. There are some great images, some great concepts, solid guest characters, and I admit that I love the company name “Kerblam!”