Okay, remember when I asked in my last review how the new Doctor’s heavier pacifism would handle a villain like the Daleks and said how episode 10 wasn’t the climax that the season needed? Well, apparently they were reading my f*cking mind, because this episode both addresses that issue and provides the climax that I wanted (giggity).

Long ago, in a distant land called England, an army composed of many rival tribes waged a battle against a single, monstrous enemy. After they managed to win, they separated the enemy’s body into three parts. One part was carried to Siberia and another was carried to a tropical island, both buried deep in the ground and guarded by clans of descendants. The last was supposed to be carried to another continent, but a bandit shot the carrier and didn’t bury him, leaving the last piece only slightly under the ground in what would later be Sheffield. 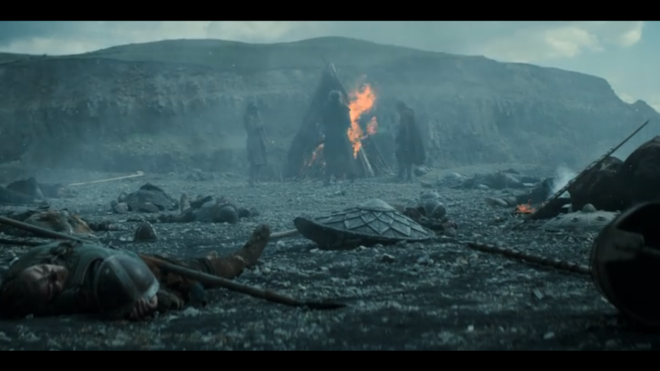 Several hundred years later, two archaeologists named Lin and Mitch (Charlotte Ritchie and Nikesh Patel) are excavating a site in Sheffield and find the body of a soldier from the 9th century. While cataloging all of the artifacts, one of the objects begins to move, something that stirs both of the other buried pieces. Lin appears to find it, but later denies it. It’s revealed that she’s actually been taken over by a tentacled being that has latched onto her back… a Dalek (Nick Briggs).

Meanwhile, the Doctor (Jodie Whittaker) and the TARDIS Trio of Graham, Yaz, and Ryan (Bradley Walsh, Mandip Gill, Tosin Cole) are watching fireworks throughout the universe in celebration of New Years when the Doctor’s “Earth alarm” goes off. She finds that something on Earth is trying to teleport something via psychic broadcast. She meets Lin and Mitch and finds out about the creature, but doesn’t find out that it’s a Dalek or that it’s attached to Lin. When the group goes to Graham’s place to find out what’s happening, Ryan’s estranged father Aaron (Daniel Adegboyega) arrives. Aaron takes Ryan out to apologize for leaving him, saying that he’s resolved to try and fix his mistake.

Dalek Lin blocks the Doctor’s tracking signal and goes to a secret storage unit which contains a Dalek weapon that it steals. It’s revealed that the Dalek was a recon scout, a particularly nasty class of Dalek. The Doctor fixes the TARDIS tracking and tries to alert UNIT (Unified Intelligence Taskforce) only to find that UNIT no longer serves Britain due to Brexit. The Dalek forces Lin to rebuild a shell for it out of garbage parts and scavenged alien weapons, giving it enough power to take out the military forces leveraged against it. The Dalek breaks into central UK communications to try and send a signal to the Dalek Fleet (if there is one), but the Doctor and the TARDIS Trio, along with Ryan’s dad, manage to stop it and destroy the shell. It latches onto Ryan’s dad and forces the Doctor to take it to the fleet, but the Doctor instead takes it to a supernova and, with Ryan saving his dad from going out, burns the Dalek to a crisp, saving the Earth.

So, I asked what the Doctor would do when confronted with the Daleks or another enemy that would never stop killing. This episode answered: She gave it multiple chances to surrender, but when it wouldn’t stop, she stopped it. While I had worried that this Doctor might have moved a little bit into almost impractical pacifism during the last season, this episode proved that she does indeed still have the willingness to deal with the reality that some enemies will never be convinced to stop. Hatred often comes from irrationality and can be overcome with tolerance or time, but some forms of hatred, like that of the Daleks, cannot be allowed to survive, for the safety of the universe.

The Dalek in this episode is horrifying. Rather than the garbage can with a plunger that a Dalek usually is, this episode mostly features it forcing a woman to be its body, taking her over completely. The moments when she is allowed to express herself, it’s clear that she’s basically being mentally tortured as the Dalek drives her body, even forcing her to kill two people. Later, it easily kills a group of soldiers when given its casing back. This Dalek might have the highest individual body count that the show has seen in a while.

The subplot of Ryan dealing with his returning father only works because we had finally gotten through his issues with Graham over the course of the season. Aaron even shows surprise when Ryan calls Graham “gramps.” Ryan had mentioned in several episodes that he often felt upset or sad about his father leaving, making it understandable that, after seeing his father is actually contrite about his actions, he forgives him. It might seem a little fast, but the pace makes it all the more powerful when Ryan risks his life to save him at the end.

This also has some of the stronger comedic moments in the season. One stand-out is the conversation between the Doctor and the call-center operator that is now handling all of the calls that would go to UNIT. When the Doctor points out that the UK needs UNIT to help repel aliens, the operator scoffs and asks when the last time there was an alien invasion, to which the Doctor points out that one is currently happening. Another is the exchange between a random British family when the Dalek destroys the internet. There are other great lines peppered throughout the episode.

Overall, this special actually served as a great conclusion to the season. It ties the Doctor back to some of her more core conflicts, but still managed to emphasize the differences between her and her predecessors. The supporting characters got more balanced appearances (although I still want more Yaz) and the villain was one of the creepiest we’ve had in a while. Solid ending.

Also, whatever problems people might have with the writing this season, and I see why it’s divisive, the cast has been amazing. Please, BBC, give them another season or two before you reboot.