The Coen Brothers make a Western anthology film and remind us all that they are masters of dark comedy.

This is an anthology broken down into 6 different stories. Each one is a different type of Western and all of them are completely unrelated. So, I’ll do the breakdown and analysis of each one separately, then the overall review at the end with a ranking of the vignettes. Is this a lot of work? Yes, but this is the hobby I have chosen and I will not surrender. Since it’s so long, I’m splitting this into two reviews. Don’t like it? Well, neither do I, but I’m doing it.

THE BALLAD OF BUSTER SCRUGGS

Buster Scruggs (Tim Blake Nelson) is a singer, a gambler, and a gunman with a cheerful disposition and a penchant for breaking the fourth wall. His well-spoken nature and disarming grin lead people to attempt to bully Buster, which usually leads to him effortlessly killing them. When Buster arrives at the town of Frenchman’s Gulch, he enters into a “gun free” saloon and tries to join a poker game that has just been abandoned. The other players say that they will only allow him to join if he plays the hand dealt to the player who just left: The Dead Man’s Hand. Buster refuses.

Another player named Çurly Joe (Clancy “Lex Kurgan” Brown), upon finding out Buster’s identity, draws a gun on him to collect Buster’s bounty, but Buster maneuvers him into shooting himself in the face multiple times. He then proceeds to sing a ballad about the departed “Surly Joe” to the delight of the other gamblers. Joe’s brother (Danny McCarthy) challenges Buster to a duel, somehow accusing Buster of ambushing Joe unawares. Buster agrees happily and then shoots the man’s fingers off his right hand. When he tries to draw lefty, Buster kills him with a single shot to the head while looking in a mirror.

He’s about to sing a song about this duel, when he hears a harmonica playing. The Kid (Willie Watson), another singing gunman, comes into town, telling Buster that he aims to prove that he’s the best at songs and duels. Buster agrees to another duel, but is shocked to find that the young man is faster than he is and is shot dead. Buster, now ascending to heaven complete with angel wings and harp, sings a duet with The Kid about all the anger in the world and hope for a better world in the afterlife. The story closes with a page reading that there is a new Kid out there somewhere that’s going to one day meet The Kid, and that it’s a story that’ll be all new, but somehow still the same.

This is a combination of the lone gunslinger Western and the musical Western, with Buster humorously being both the man who rides into town wearing iron and also the one who spontaneously leads the crowd into jaunty tunes. This combination probably best represents the Coen Brothers’ sense of humor. It’s a juxtaposition that goes against the standard formula for each type, with the gritty violence of a Sergio Leoni Western put into the Rodgers and Hammerstein world of Oklahoma. The closest thing I can think of prior to this is the Jane Fonda and Lee Marvin film Cat Ballou, but even that didn’t have the explicit violence of this film.

Buster is an interesting character. He resents the fact that many of his nicknames are inaccurate or unflattering, particularly being called a “Misanthrope.” He tells the audience that he never hates his fellow man, because even when they’re surly or cheaters, that’s just part of the human condition and that anyone expecting better is just being foolish. What’s interesting is that this IS a form of misanthropy, believing that people are inherently lousy and that it’s irresponsible to believe that people should be better. This makes it all the more fitting when, having died, Buster’s wish is to go to a place where people just are better. Not a paradise, not a golden city, just a place where he doesn’t feel like he has to expect people to be bad.

Willie Watson’s acting isn’t spectacular compared to the all-star cast of the film, but he is a fabulous singer and a perfect fit for his character. The duet at the end of the story is beautiful. I was really impressed with Tim Blake Nelson’s performance and the general quality of the music as well. Given that it was done by Carter Burwell who has done the music for every Coen Brothers movie, I shouldn’t have been surprised.

A Cowboy (James Franco) tries to rob a bank but is thwarted by the makeshift-armor-clad Teller (Stephen Root) who knocks him unconscious. He awakes to find himself sitting on his horse with a noose around his neck. He’s told by a lawman (Ralph Ineson) that he was tried by a jury and convicted and sentenced to death by hanging while he was unconscious. The execution is stopped by a group of Comanche warriors attacking the lawman’s posse and killing everyone but the Cowboy. He’s saved from hanging by a Drover (Jesse Luken) who shoots him down after accidentally making him swing for a minute or two. However, the Drover turns out to be a cattle rustler who abandons the Cowboy to be arrested for stealing cattle. The Cowboy is convicted and sentenced to death in less than a minute by a Judge (Michael Cullen). Before the Cowboy is sentenced to die, he spies a beautiful girl in a crowd and mutters “there’s a pretty girl” right before he’s hooded and dropped, killing him to applause.

This is a bank robbery Western, but with the heist going wrong immediately and more time dedicated to the comical circumstances of the would-be robber trying to avoid justice. Ultimately, the Cowboy actually suffers more from all of the events that lead to him from being hung than he would have if he just got crippled by the Teller.

Franco’s general lack of concern about his welfare is one of the more humorous aspects of the portrayal. When he’s asked about last words, he just says that the Teller didn’t fight fair. When he’s brought to the final hanging, he sees a man crying next to him and just asks him “first time?” It’s just so straightforward and disinterested that it perfectly contrasts with the ridiculous things happening around him. It’s got a lot less in terms of actual events than some of the other vignettes, but that’s because a number of scenes drag out to torture the Cowboy and, to an extent, the audience.

An Impresario (Liam Neeson) travels the West with a performer named Harrison (Harry “Hot Dursley” Melling) who doesn’t have any arms or legs. Harrison recites classical poetry, particularly Percy Bysshe Shelley’s poem “Ozymandias,” Shakespeare Sonnets, the Bible, and the Gettysburg Address. At first, the audience gives generously to the Impresario for the performance, but as he goes to increasingly remote camps and small towns the money starts to run thin. This is compounded by the fact that he has to do everything for Harrison, including helping him urinate. The Impresario starts drinking and whoring to try and ignore the issues, which naturally seems to make everything worse. After a particularly bad show netting them no money, the Impresario sees a show that’s gathering a crowd, revealed to be a chicken that can do math. The Impresario buys the chicken, keeping it in the back next to Harrison. As the cart passes by a bridge, the Impresario gets out and drops a stone to check the depth of the water. He walks back to Harrison smiling. The next shot shows the chicken alone in the back, Harrison presumably dead. If you read the page that quickly is turned as the story ends, it’s made explicit that the Impresario dropped the helpless actor into the water.

This is a twist on the survival Western, occasionally nicknamed the NorthWestern, something Liam Neeson kind of already did a version of with his film The Grey. Unlike most Westerns where it’s the conflict between man and man outside of normal civilization that form the basis for the plot, the conflict in a survival Western is between the man and the elements. Similarly, while most Westerns are typically set in the summer to characterize the verdant wilderness, this vignette is set in the Winter to drive home the harsh conditions that Harrison and the Impresario are dealing with as they make their way. Ultimately, though, this becomes a different kind of survival issue in the end, when the Impresario realizes that Harrison is now a mouth to feed that isn’t paying his own way. Meal Ticket indeed. 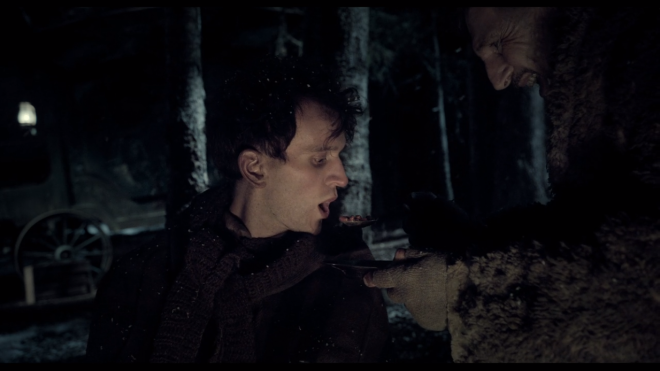 The pieces which Harrison recites are shown over and over again and most of them feed somewhat into the final act of the short. Sonnet 29 from Shakespeare is about a speaker who has been an outcast his entire life. Ozymandias’s famous last image is that of the lone and level sands of the desert sweeping away, showing that nothing remains of the once great empire of Ramses, similar to nothing remaining of Harrison’s performance. Cain and Abel from the Bible… well, that one seems pretty straightforward. I always appreciate when appropriate references are used.

That’s it for part one, see you tomorrow for the other half.

One thought on “Netflix Review – The Ballad of Buster Scruggs: A Comic Anthology of Death in the West (Part 1)”