I get my first reader request to try and interpret a movie, the British film Await Further Instructions. I regret accepting this request.

It’s Christmas time. A time for family. Even the family that you don’t really get along with. The last one is the circumstances that our protagonist Nick (Sam Gittins) finds himself in, when he returns home after a long time away, bringing his girlfriend Annji (Neerja Naik) to meet the Milgram Family. They immediately find themselves in conflict with Nick’s racist grandfather (David Bradley), his pregnant and proudly-ignorant sister Kate (Holly Weston), her meathead husband Scott (Kris Sadler), and his authoritarian father Tony (Grant Masters). His mother Beth (Abigail Cruttenden) is just sort of weak and obliging, but everyone seems to manage to get along, though it’s strained. The next morning, Nick and Annji decide to leave early to avoid more conflict, but find that the house is now surrounded by a mysterious black substance.

All cell phones are down, the internet is down, and the only contact with the outside world is coming through the television, which is displaying emergency messages, telling the family to “Await Further Instructions.” At first they attempt to just continue life as normal as possible, but soon the messages tell them to get rid of their food, to rub their bodies with bleach, then to inject themselves with “vaccines” that come through the chimney and are contained within dirty needles. At every step, the cycle basically goes “Nick and Annji point out that this is a terrible idea, then Tony overrules them.”

Throughout the movie, the people are compelled to do more and more extreme acts by the television, until the truth of the situation is revealed.

This movie is an example of “good idea, bad execution.” The premise of people under stress turning on each other is fairly old, including the classic The Twilight Zone episode “The Monsters are Due on Maple Street,” but tying it in with technology and featuring a family representative of the current societal cultural divides does distinguish it. There are, however, three big problems with this movie. First, the characters are too over the top. Tony, Kate, and Scott are all just too irrational, too quickly. Tony is not just immediately ready to believe whatever the TV says, but to use violence to enforce it. When it’s time to pick someone to be isolated, they don’t even consider that Scott, the guy who literally just shoved his hand into a mystery hole, might be the one who is infected. Meanwhile, Nick and Annji, the supposed voices of reason, just keep going along with stuff after they get shouted down. Nobody does much to figure out what’s going on for the first hour of the film, despite that being most people’s first reaction. It just doesn’t work well. Second, the dialogue is clunky as hell. Almost every line is awkward and uninspiring and could basically be called “cliche roulette.” Last, *Minor Spoiler* the last twenty minutes of the movie is such a violent change that it kind of feels like it was intended to be a different movie. *End Spoiler*

So, the actual request I got was asking if this was an “anti-vaxxer” horror film. It’s pretty obvious why the question comes up, since the people in the movie all inject themselves with vaccines which *Minor Spoiler* doesn’t end well *End Spoiler.* I don’t deny that you can interpret that scene as being against trusting vaccines given to you by authority figures, but I think I can explain it as just being an incidental part of a bigger message.

The film’s about blindly obeying authority, and that’s really any kind of authority. The family that is featured, the Milgrams, are even named after the famous Milgram Experiment, an experiment which confirmed that, if people are told by an authority figure to hurt or even kill someone, about 30% of people (or potentially up to 60%) will eventually do so. Admittedly, the experiment was aimed at being about authority, but subsequent experiments suggest it’s less about obeying and more about disclaiming responsibility. Still, the movie is a clear cautionary tale about the perils of not questioning orders.

“But Joker,” I hear my reader say, “isn’t the basis for rejecting vaccines essentially rejecting the authorities telling you that they’re helpful in favor of asserting your own belief (comment below if you actually said it, because that’d be awesome)?” Well, yes, but the difference is that vaccines are supported by scientific authority, whereas policy or command decisions are derived from, eventually, martial authority. The beauty of scientific authority is that any human being could, through study and time, go through the entire history of scientific discovery and eventually understand why and how vaccines work. Science is not an opinion, it’s a system by which we remove opinions until the truth remains. Yes, sometimes prevailing theories wrong, particularly in soft sciences, but the beauty is that if you prove a theory wrong, then your correct theory becomes the new main theory. Science never encourages you to blindly follow it, because the less blind you are, the more it helps science. Scientific authority is best summarized as “what is proved right becomes right, what is proved wrong becomes wrong.” Citation: Every scientist ever (myself included).

Command decisions on the other hand, such as Tony’s orders to the family or the TV’s orders to Tony, are backed by martial authority. That means that, eventually, you fall in line because if you don’t, someone bigger than you commits violence upon you. That’s pretty much the way that all of civilization works: If you break the agreed-upon commands, someone kicks your ass. Sure, we’ve got courts and lawyers between us and most of the actual violence, but if you keep breaking the rules, eventually, violence will be inflicted upon you. We actually see that exemplified in the movie multiple times, particularly with Tony’s drafting of Scott as a foot soldier who carries out violence when Nick disagrees. However, the issue with unchecked martial authority is that eventually more and more violence is used in response to smaller and smaller violations of decrees.  The movie weakly tries to bring in religious or divine authority, but it’s mostly tied in with martial authority. Martial authority is best summarized as “what is right is what I say is right or else I smash your face in.” It encourages blindly following authority, because every time you question it, it has to smash your face in and sometimes that encourages you to smash back. Citation: Pretty much all of history.

The scene in the movie where the characters take vaccines even has a character point out that the risk isn’t just in the vaccine, it’s that the vaccines are improperly packaged, contain dirty needles, were delivered by chimney, and are in response to a health crisis that there is no evidence is even real. That’s not the same as saying don’t trust doctors and scientists. Hell, the two most educated characters, including one nurse, are the ones who are actually shown to be in the right about everything. So, no, I don’t think the movie is actually anti-vaxxer, it just was a little messy in this scene.

Overall, parts of the film, mostly the eerie way the television communicates and the body-horror, are well done. Other parts, particularly the characters and the dialogue, are just uninteresting and terrible. Horror doesn’t always need great dialogue (so many conversations from 80s slashers about sex come to mind), but it has to at least be INTERESTING dialogue, if you’re not having super strong visuals, and there aren’t many visuals until the end. I actually think they would have done better to have the television be communicating seemingly through regular media broadcasts, which might have given them a more cohesive message at the end, which brings me to…

At the end of the movie, it’s revealed that the black mass surrounding the house is actually a tentacle monster which is basically made up of coaxial cables and has been infiltrating their television and controlling them. At the end, it even moves to motivating Tony to worship it, allowing it to completely control him. After everyone in the house is dead, the monster dissolves Kate’s body and says hello to her baby. Meanwhile, the rest of the neighborhood is similarly falling apart and being consumed by the black creatures. So what’s happening here?

Well, I admit that the last 20 minutes of this film is a little bit off-the-walls and gets a little confusing in themes. Most of the movie up until this point has been a fairly straight-forward message about the danger of not questioning authority or about succumbing to martial authority, but while the monster had been using the television to control everyone, it doesn’t do anything through traditional media. In fact, any time anyone tries to guess the source of the broadcast, it’s either Tony asserting that it’s the government or Nick asserting it’s coming from a sinister other source. The only statements about traditional media are a few lines about stories that the characters use as a basis to discriminate, but nothing about them really places any message about the media there. Despite that, the ending seems to be a pretty straightforward metaphor… I mean, it’s a child that is going to be raised by a television telling the baby to “worship [it].” 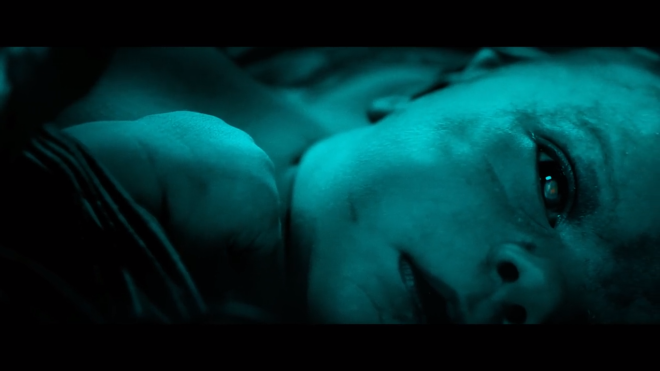 Like I said, the ending gets a little confusing, and I think the key to it is that Annji sees the heart of the television is actually controlled by the monster. This indicates that the monster hasn’t just been there since Christmas, but possibly for a while, meaning that the monster knew how humans can divide themselves over issues and how prone certain people are to taking commands, allowing it to craft a perfect series of commands to the family to get them to kill themselves. Hell, it even knew Christmas was the time when people are the easiest targets, because they’re all together. When Nick and Annji resist, it just has Tony do the job. Finally, when it’s left alone, it seems to gently greet Ruby, the baby. That’s because this has probably been its goal all along, to raise a generation of children under its control to provide it with unquestioned worship. That’s the only way to explain why it chose to spare the baby, but not Tony, who is already its worshipper. Do I have very much to go on there? No, because the last 20 minutes of this movie are insane and hard to nail down. Is it about all authority or media? Is it about killing people or controlling people? I have no idea, but that’s my best guess. If the movie had chosen the television to communicate through, say, hijacked news broadcasts, that would have made a better metaphor, in my opinion, but I didn’t make the film.