Bender gets broken and tries to find himself as a folk singer… also, Beck is there.

Fry (Billy West) and Bender (John DiMaggio) come across a broken down VW Microbus and Fry pushes it to Planet Express. He tries to fix it up but finds out that petroleum no longer exists and everyone now uses whale oil.  Bender tries to open a can of the substance, but he gets caught by the magnet in the can-opener and pulled into it, mangling him horribly. At the robot hospital, Bender is informed that he will never be able to move again. He starts to despair, only to find out that he is in the hospital with Beck, the musician-poet who transcends genres even as he reinvents them. He also did “Loser.” Beck, now just a head in a jar, tells Bender that even without a working body he can still lead a rich life. Beck gives him a pair of small mechanical arms which Bender can control and which he can use to pull across his torn-up torso as a washboard. Beck invites Bender to come on tour with him.

Fry, Leela (Katey Sagal), Amy (Lauren Tom), and Zoidberg (West), follow Bender and Beck on tour in the Microbus. While at a laundromat, Zoidberg’s shell runs, ruining their money but making all of their shirts Tie-Dye. Accordingly, they adopt a life as poor hippies. Bender sees a group of broken robot fans being disposed of and decides to organize a charity concert for broken robots and he starts writing his own song about being broken. After he finishes it, Fry and the others visit him at his hotel and Bender miraculously finds out that his hydraulics have started working again and he can move.

Worried that his returned mobility will ruin his career, Bender opts to pretend to still be broken. He heads to the concert while the others take the bus. When they get to the concert, Dr. Zoidberg begins vomiting from eating too much dirt, but it turns out that he’s vomiting up beautiful blue pearls which the gang sells for money. Bender sings his song “My Broken Friend,” but he gets so caught up in it that he starts dancing, exposing his lies. The Robots now hate him as a faker, Beck hates him for exploiting him, and the fans hate him for being a phony. Bender hops in the VW bus and drives off with the others while Beck and the other musicians at the concert follow. 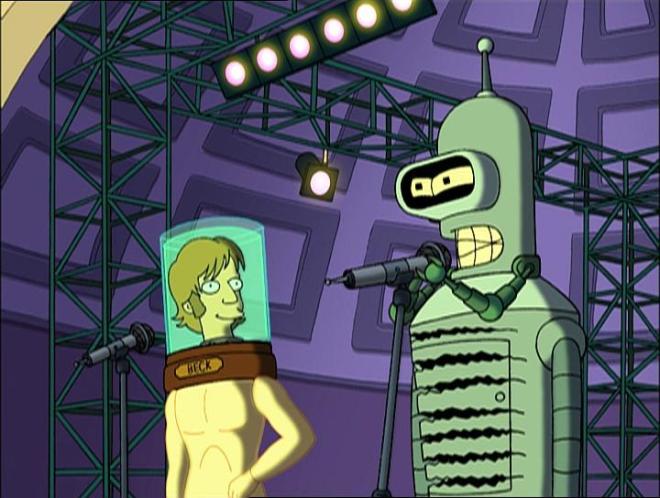 Bender tries to outrun Beck, but accidentally drives the bus off of the Golden Gate Hover-Bridge. Bender grabs a cable and saves them (incidental to saving himself), but Leela lets go of him and he is flung into the sky, crashing near Beck. Bender claims to now be really crippled and to have learned a lesson, but Beck sees through it immediately. Beck still forgives him, though, after taking the check back. Bender and the crew start paddling home, despite the insanity of that statement.

Well, we finally get that episode of Bender living his dream of being a folk singer that has been hinted at periodically until now and… it’s exactly that. I mean, it’s a little oblique since Bender mostly only follows as Beck’s accompaniment and his fame comes less from his talent and more from his disability, but still, this is technically him trying to fulfill his dream. It just really didn’t explore much beyond him singing “My Broken Friend,” which, due to the circumstances, comes off as even more insincere that Bender usually is.

The premise of Bender being crippled might fall a little short if it weren’t for the “twist” that he’s actually perfectly fine. I mean, think about it, Bender’s somehow crippled, but in other episodes he’s survived being flattened, disassembled, and shot full of holes. Hell, one episode’s entire plot revolves around him SELLING HIS BODY FOR MONEY and not in the way that my readers are used to. I realize that all of the rules in Futurama are pretty loose and can be re-written to fit the gags, but still, it made more sense to reveal that he wasn’t actually crippled than to suggest that he somehow was ruined without any damage to his head.

Beck’s presence in this episode feels strangely like a Simpsons cameo, except that it’s central to the plot. He shows up as a slightly goofy and exaggerated version of himself, which works well because Beck is kind of weird to begin with, but it just keeps going more and more self-derogatory and mocking. The only reason why it works is that the shots Beck takes at himself are mostly exactly the kind of shots that you imagine that someone like Beck would take at himself. It’s honestly fun to see him defend some of his more odd choices using things like the “Becktionary” or forgetting what his own compositions are about. He also has a nice enough image that everyone can kind of believe him sincerely wanting to help but also being able to satirize the folk music industry a little.

The B-Plot of the rest of the Planet Express crew following Bender as hippies is pretty funny at times, although it also produces some wildly out of character moments with regards to Leela and Amy. Amy’s money gets destroyed in the wash, but, since she’s a trillionaire, they never explain why she doesn’t just get more. I mean, again, the show does have a very loose continuity, but Amy being spoiled and rich is her biggest character trait. It’s like if you were to make a version of the Archie comics where Jughead doesn’t eat a burger for an entire season, it just seems like you’re using the character in name only (Note to self: Kill everyone involved in Riverdale). Still, it did give us the great image of the rednecks of the future saying “You heard him, freaks. We don’t like your type around here. These are the types we like.”

Overall, it’s not a bad episode, but this season’s got better on the way.

Tie between Beck and Bender playing Sexx Laws for 3 hours because they “got into a serious thing… and then [Beck] forgot how it ended” and the image of what the future United States looks like as they go on tour. Here’s a list of the states of the future:

New New York, New New Jersey, Sylvania and the Penn Republic, East West Virginia, West Virginia (guess they won the second Civil War), Washington A.C. (because AC > DC, ya dig?), eHIO, ‘Ucky (Cuz “Kent” is a liberal name), Muontana, Washingtron, WyΩing (where the Buffalo RΩ), User ID:aho, XORegon, Nukevada, Human Farm (Formerly Utah), 24 Bit Colorado, and High Cal and Low Cal (ifornias). Are most of these names used only for this gag and contradicted later in the show? Hell yes, but this is the kind of fun sight gag that I can just accept and move on from.

Are any of those any good? Let me know.

PREVIOUS – Episode 44: The Route of All Evil

NEXT – Episode 46: Time Keeps on Slippin’