Tell me if you know this story: Four guys are trapped on a boat for days. When they’re finally rescued, there are no longer four guys on the boat. Turns out, when you get hungry and thirsty enough, certain things stop being “unconscionable” and certain people stop being “inedible.” In this case, it was a cabin boy by the name of Richard Parker.

What’s crazy about this story is that you could have heard it from the Edgar Allan Poe novel The Narrative of Arthur Gordon Pym of Nantucket or from the real-life incident following the crash of the English yacht Mignonette. In both cases, the ship sank and the survivors ate Richard Parker. You might think Poe was ripping from the headlines, but Poe published his book more than 40 years before the real-life incident in 1883. Add in Life of Pi and I’m pretty sure having a Richard Parker on any kind of watercraft means you’re screwed.

In the version that’s filed under non-fiction, there were originally four men on the boat: Captain Dudley, Seamen Stephens and Brooks, and the 17-year-old Parker. According to the survivors’ accounts, the vessel was taken down by a wave that didn’t seem strong enough to do any damage, let alone take half of the bulwark off. Since “going down with the ship” seemed like a bad idea, they lowered the lifeboat and, grabbing a few navigational supplies and two tins of turnips, were now stranded about 1600 miles from shore. After roughly fifteen days without fresh water, and only a small turtle’s worth of meat, Parker tried drinking seawater and became sick. Three days later, he became nearly comatose. Feeling like they were out of options, Dudley decided it was time to have “the talk.” 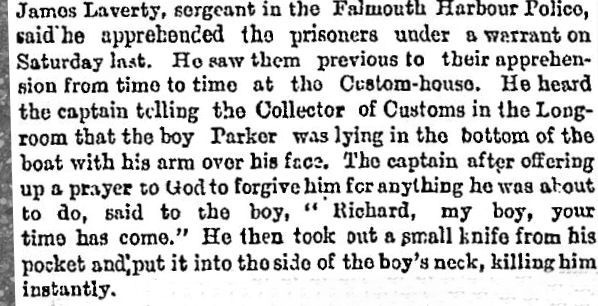 Brooks flat-out refused, but Stephens was open to it. After Brooks went to sleep, Dudley approached Stephens directly about eating Parker. By his own testimony, the main thing he said to sway Stephens was that he and Stephens had wives and families, but Parker was an orphan. He also pointed out that if Parker died naturally, they couldn’t drink his blood for hydration. Since they had so many people relying on them and the comatose kid had no one, the traditional maritime rule about “drawing lots” seemed stupid. The next day, Dudley stabbed Parker in the neck with a pen knife, bleeding him to death. The three proceeded to eat him, with Brooks admitting he wouldn’t pass up survival even if he didn’t approve of killing someone. The next day, they finally caught some rainwater, allowing them to regain their strength before being rescued three days later.

Naturally, there was a bit of a conflict over their actions, legally speaking. On the one hand, it wasn’t exactly unheard of for this to happen when people were floating on the ocean for weeks at a time. Even after charges were brought against Dudley and Stephens, Dudley was confident that they were going to be dropped, because there was precedent saying that necessity could be a defense to murder in cases like this. On the other hand, they almost certainly would still have survived if they hadn’t killed Parker. They also didn’t follow the Maritime “rule” about drawing lots, meaning that Dudley and Stephens had directly conspired to kill a man, rather than just having a person be “sacrificed.”

The charges didn’t end up dropping.

Instead, they went on trial and, as expected, argued that, at the time they did it, they had to kill Parker or die themselves, making them not guilty by necessity. What wasn’t expected was that the Court responded with “nah, f*ck that.” The Court instead pointed out that people will always argue that they felt they had to commit the crime, but that, if the Court said that was an excuse, then they were making a fundamentally wrong thing legally right. The State should never establish a law saying that it’s okay to kill someone who isn’t a dire threat.

It must not be supposed that in refusing to admit temptation to be an excuse for crime it is forgotten how terrible the temptation was; how awful the suffering; how hard in such trials to keep the judgment straight and the conduct pure. We are often compelled to set up standards we cannot reach ourselves, and to lay down rules which we could not ourselves satisfy. But a man has no right to declare temptation to be an excuse, though he might himself have yielded to it, nor allow compassion for the criminal to change or weaken in any manner the legal definition of the crime.

So, the Court found them guilty and sentenced them to death. However, there’s a line in the ruling that would probably be overlooked except for what happened next:

…if in any case the law appears to be too severe on individuals, to leave it to the Sovereign to exercise that prerogative of mercy which the Constitution has intrusted [sic] to the hands fittest to dispense it.

Yeah, that’s the Court saying “here’s the principle we’re enforcing, but sometimes people are gonna get screwed by it, and we have a way to fix that.” So, a few days later, the men had their sentences commuted by Queen Victoria through her Home Secretary William Harcourt to a mere six months in jail. This was actually considered pretty harsh by Dudley and Stephens, but, again, they ate a guy.

And this, ladies and gentlemen, is why we have clemency (forgiveness of punishment) and the pardon (absolution of guilt). Because sometimes you have to put a rule in place that upholds a really important principle like “you can’t just say I really wanted to murder that guy” or “you can’t just whip out your dick to strangers (more on that this week),” but sometimes these rules can, justifiably, be broken. In those cases, we need a mechanism in place so that someone can look at the case and go “yes, you broke the law, but you probably shouldn’t be punished.”

So, stick with me through this series while I go into the workings of the pardon, when it should be used, who it should be used on, how we’ve managed to f*ck it up, and why Captain America and Iron Man fought the most pointless ideological war that ever had to be undone for a sequel.

Don’t eat anybody, I’ll see you in two weeks.

One thought on “C is for Captain America and Cannibalism: On the Pardon”