Invader Zim is what happens when Nickelodeon doesn’t fully investigate who they’re giving money to. It’s similar to how WNBC got Howard Stern. They heard something was popular, decided to get the person responsible, then immediately realized that it conflicted with their image.

Showrunner Jhonen Vasquez is a messed-up human being, and the creator of such works as Johnny the Homicidal Maniac. He is also a darkly comic genius of the highest order. Invader Zim was a show that ran on the logic that whatever would confuse, amuse, or disturb the audience the most should be the next image on screen or line of dialogue. Sometimes this was frightening or irksome, but, usually, the juxtaposition was hilarious. 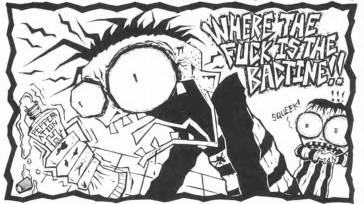 A Good Candidate for a Kid’s Show

The show’s style is incredibly distinct, to the point that I have seen other shows adapting some elements of it more since the show was…