Fry (Billy West), Bender (John DiMaggio), and Leela (Katey Sagal) are told they’re not good enough to collect Space Bee honey for the Professor (West). Leela insists they are and drags the other two on a mission, even though it killed the last Planet Express crew. The crew reaches the space bee hive and paint Bender like a bee so he can communicate via dancing. They eventually find the previous Planet Express crew, a load of honeycomb, and a flow of royal jelly. Leela collects a baby queen bee and some royal jelly as the crew tries to collect the honey. Bender accidentally insults the queen of the hive and the crew is chased back to the ship. On route to Earth, the baby queen tries to kill Leela, so Fry jumps in front of her, sacrificing himself by being impaled with the stinger. He dies.

Fry’s coffin is ejected into space after a sad funeral. Leela, blaming herself, eats some space honey to ease the pain, knocking her out. She dreams of a still-alive Fry telling her that he left her a surprise in his locker. She goes to work to find it and discovers that Fry did indeed leave her a one-eyed stress-relieving doll as a gift. Leela says this proves Fry is alive, but a brain-scan by the Professor says that she’s just blocking out memories due to grief. She has another dream of him being alive and awakes to his jacket on her, only for it to turn out to be her jacket when she shows it at work. They inform her that she might be having issues because she’s eating spoonfuls of Space Honey, which, if overused, can lead to permanent sleep. Leela tries to use it again that night and knocks over the jar, reconstituting Fry from the jelly. She celebrates Fry being alive, until Fry tells her to wake up, revealing it’s a dream.

Leela starts hallucinating regularly and envisioning all of the crew telling her that she killed Fry. She decides to take enough honey to dream forever, only for Fry’s voice to reach her and tell her that sleeping forever isn’t an option. She’s stronger than that and she should fight against it. She starts to be surrounded by bees attacking her only for Fry’s voice to tell her that he loved her. She cries, only to wake up in the hospital next to Fry. It turns out that the stinger DID go through Fry… into Leela, who got all the poison. Fry had to get a new spleen, but after that he never left her side, begging her to wake up for two weeks. The voices she heard were him watching out for her. They hug.

This episode was a lot darker on rewatch than I remember. Leela’s not only in a coma, but while in the coma she is seemingly about to make an active choice to put herself to sleep forever, which I can only assume means never waking up again in real life. Even worse, she’s doing it because she thinks that she’s killed Fry and is desperate to see him again. Despite the fact that Fry and Leela’s on-again-off-again relationship is not currently on, we see in this episode that Leela truly is starting to have feelings for Fry that are just as strong as his feelings for hers. More remarkably, it happens without Fry having the brain worms from the last time she was smitten with him. Having the entire episode inside of her head gives us a clearer picture of this character right before the show was going to need to wrap up this plotline. Still, having her so grief-stricken that she’s essentially going insane and about to kill herself is freaking dark.

What’s more impressive in some ways is that the ending to this episode doesn’t feel like a cop-out to me. I mean, this is an episode where the twist is that it was all a dream, an episode where they fake having a main character die, and an episode where somehow you can dream within dreams and yet I didn’t hate it the way that I usually hate all of those cliches. I think it’s that this episode was pretty early in hinting to the audience that it wasn’t real and that it used the dream setting perfectly as a way of trying to show everyone how devastating grief can be. Leela blames herself for Fry’s death so completely that all of the walls in her apartment are chanting that she killed him. This is only made worse by the fact that Fry actually sacrificed himself for her. I also appreciate that in reality, Fry still did try to sacrifice himself for her, even if he ended up only losing a spleen. It shows again how much he cares for Leela.

Overall, I like this episode a lot. I really enjoy the spontaneous musical number and the final hug between Fry and Leela.

There’s a shot of all of the women Fry has slept with from the show. During the shot, Kug (Tress MacNeille), the Amazonian that banged Fry in “Amazon Women in the Mood” says “Him do good Snu-Snu” only for all of his other exes to say “eh….” Remember, Kug had never had sex before and it seems unlikely that she’s had it since, so her perspective might not be great. The other women we see present are Petunia (MacNeille) the hooker “Put Your Head on My Shoulders,” Morgan Proctor (Nora Dunn) the bureaucrat “How Hermes Requisitioned His Groove Back,” Michelle (Sarah Silverman) his frozen ex “The Cryonic Woman,” and the other 21st Century girl he hooked up with from “Love’s Labours Lost in Space.” However, next to them is a radiator… a reference to Fry saying he hooked up with a radiator woman from the radiator planet at the Miss Universe contest in “The Lesser of Two Evils.” Since this is in Leela’s mind, that means that Leela must, on some level, believe that Fry DID in fact hook-up with a radiator alien. I love that this is the man she eventually ends up with. 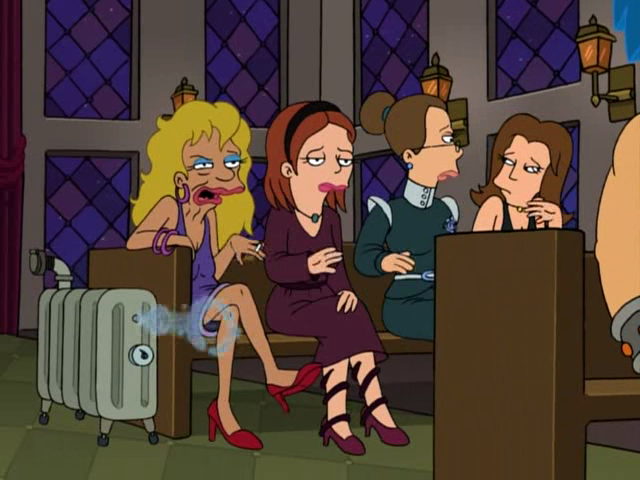 PREVIOUS – Episode 65: Where No Fan Has Gone Before