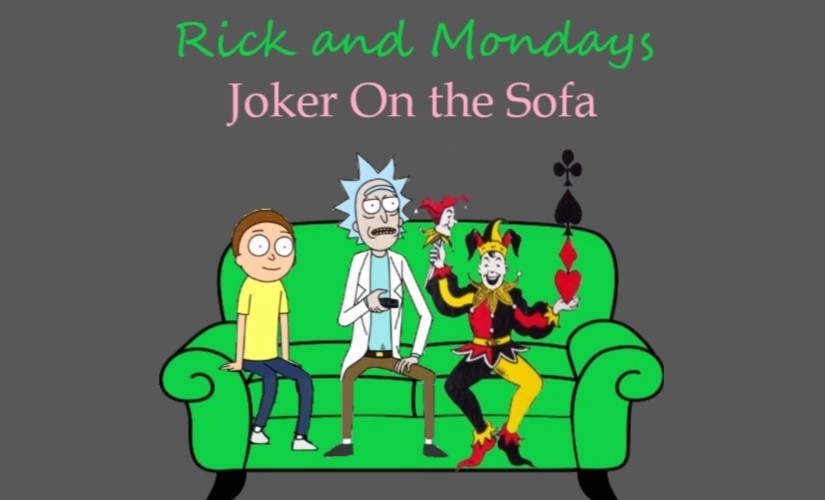 Rick gets drunk with a dragon and also dragons are real and kinda creepy.

Morty (Justin Roiland) goes with Rick (Roiland) on an adventure, only for it to be revealed that Morty had only agreed if he got a dragon. Rick, eventually giving in, gives Morty a dragon that he contracts with a Wizard to obtain. Morty rides the dragon, named Balthromaw (Liam Cunningham), but quickly realizes that the dragon doesn’t like him. When Balthromaw starts accidentally wrecking the house, Rick goes to get rid of him, but finds that the beast’s hoard is filled with things that he treasures. Upon talking to the dragon, the two start getting along and partying together, leading to them both ignoring Morty. After a particularly revelatory evening, Rick and Balthromaw end up soul bonding just as Morty revokes his contract. The Wizard returns to collect the dragon, but it turns out that Rick now feels any pain that Balthromaw does. Since Balthromaw is going to be killed for being a “slut” dragon, Rick, Morty, and Summer (Spencer Grammer) follow the Wizard back to his dimension, only for the Wizard to easily defeat Rick.

At the same time, Jerry (Chris Parnell) has been dealing with a talking cat (Matthew Broderick) that convinces him to fly to Florida. The cat constantly comments on the fact that he won’t explain why he can talk. Jerry and the cat have a good time until the cat blames Jerry for pooping on the beach, getting Jerry ostracized. The cat then tries to party with some college kids, but ends up pissing them off by questioning their games. The cat gets kicked off of a party boat and reunites with Jerry, asking for a ride home.

It turns out that Rick’s science doesn’t work in the realm of magic. Morty saves Rick with a magic spell, then Rick manages to build a “magic-punk” gun that allows him to turn Summer into a magic archer and devastate the forces of the Wizard… right up until Summer screws up and the Wizard retakes the upper hand. Morty frees Balthromaw and the group flees to a cave filled with other “slut dragons.” The slut dragons are revealed to be, in fact, extremely sexual, which unnerves Morty until the elder dragon forces everyone to soul-bond and create a soul dragon that destroys the Wizard and frees all of the dragons. Balthromaw follows the group back to Earth, but everyone just wants to be done with him, declaring it the “worst adventure ever.”

Rick goes to pick up Jerry and the cat, but ends up scanning the cat’s brain to figure out why it can talk. While undisclosed, the cat’s mind horrifies Rick and makes Jerry nauseous to the extreme. Rick is about to kill himself, only to instead wipe Jerry’s memory and get rid of the cat. It eventually meets up with Balthromaw and asks to go back to Florida.

So, this definitely was not one of my favorite episodes, but the more I thought about it while writing this review, the more I think that maybe it’s not as bad as I initially thought. I mean, it was never “bad,” because Rick and Morty is just naturally a bit more creative in storytelling than other shows, but I thought it was a little bit of a low point.

A big part of what I think is missing in this episode is the traditional A-plot and B-plot interplay that the show does so well (AND I WILL NEVER STOP TALKING ABOUT IT UNTIL OTHER SHOWS GET IT RIGHT), but here the two don’t seem to really have any thematic connections on the surface and the B-Plot is extremely short. However, both of them are actually about dissecting two different sides of the fantasy genre. The traditional Lord of the Rings or Game of Thrones high fantasy subgenre is shown to consist of a repressive wizard who captures and enslaves dragons for profit and dragons which are revealed to be very aggressively sexual, bordering on rapey. The cat, meanwhile, is a representation of magical realism subgenre. It’s just a cat that shows up, talks, and offers adventure to a poor schlub… but it turns out that the cat’s just kind of an a**hole (like most cats), the adventure is just a beach party that the cat ruins, and that the reason why the cat talks, which in most magical realism will be a major revelation, is never revealed and we’re apparently better for that. While it’s not the best subversion in the series, or even the season, it’s a little better upon realizing that both plots are at least hitting the same genre.

Rick being a dragon is a neat parallel to draw. Rick, like a dragon, is destructive, old, and also brilliant. Rick and Balthromaw end up bonding over his hoard, because while Balthromaw hoards valuables, Rick hoards his technology from anyone else. They both thrive on keeping stuff from others to make themselves superior. Unfortunately, they don’t really leave it up to the viewer, instead having both Balthromaw and Rick himself say that Rick is a dragon.

One thing that I both like and dislike about the episode is that the show couldn’t let Rick be powerless. When Rick is shown to have no technology in the wizarding world (sue me, Rowling) and Morty quickly starts to recite spells from the book, it seems like we’re looking at a rare role-reversal with Morty taking the lead. This quickly gets undone by Rick managing to create a new version of technology using magic that puts him back in charge. When I first watched the episode, that kind of annoyed me because it rendered Morty’s use of the spellbook as mostly pointless, but in retrospect it just shows us that Rick’s mind is so amazing that he can adapt to new laws of nature. Magic is just a sufficiently advanced technology and vice-versa. Still, I kind of want to see Morty have the upper hand more often and this was a good opportunity.

I also kind of liked the idea of the villain being a slut-shamer, except that the dragons he was shaming ended up being creepily sexual, so… really a plus and minus there as well.

There aren’t a ton of floating theories here since there is no indication that Rick planned all this nor is there anything about the situation that would give him a motive to. So, instead, I’m going to take a stab at the big unknown:

WHY DOES THE CAT TALK?

First, what do we know? The cat was not born able to talk, because that would be his explanation. Instead, he somehow gained the ability from something which he is extremely ashamed of. It’s also something that is horrifying not only to Jerry, but, more impressively, to Rick freaking Sanchez. Rick is about to kill himself out of pure disgust, as opposed to his usual depression, so he’s seeing something worse than the stuff he does which means worse than enslaving a planet or a lot of genocide. While we don’t see what it is, we hear a few things. We hear what appears to be boots marching in sync, explosions, and babies crying. HUMAN babies. We also get the implication from Jerry that no one else would remember the events, which is why Rick chooses to remember them.

Second, what is the cat a reference to? Well, several things, but most prominently the 1978 Disney movie The Cat from Outer Space, which the episode even directly references. In that movie, there’s a cat that talks telepathically and, like the cat in this episode, hardly ever seems to stop doing cat things while talking (because it was a real cat in the movie and cats are a**holes). However, none of the events of that film really lend themselves to a backstory like that… unless you consider that at the end of that film, Jake, the titular cat, has a girlfriend, superior technology, and a pending litter. While Jake can’t really talk or use his powers without a collar, it’s stated in the film that the telepathy powers are only AMPLIFIED by the collar. They are innate to Jake’s species, unlike the telekinesis which the collar provides. So, what happens when Jake’s offspring learn what happens to common cats like their mother, like being locked up in the pound or put down? Well, they might end up very, very upset at humanity for how they treat cats… and that their dad can call down an armada.

My proposal, therefore, is that the cat in this episode is the son of the cat from outer space. He ended up using his species’ superior technology to eradicate humanity on another Earth, but humanity ended up taking the cats out with it, since this is the only survivor. Since one of the collars in the film was ultimately given to the humans as a token of goodwill and the other would be with his father who likely would oppose his plan, in order to destroy humanity, the cat had to focus and develop his powers to be able to talk without a collar. Him learning to speak ultimately destroyed both sides of his family. So why does that look worse than Rick’s usual murder sprees? Well, because this is presumably an army of cats clawing people, including children and infants, to death, ensuring total genocide of both species. That’s going to be a very, very, graphic image, even for Rick.

Or maybe the cat’s Cthulhu, but I’m going with the reference here.

This was still one of the weaker episodes of Rick and Morty, but I still had an okay time with it. Plus, it referenced The Cat from Outer Space, which I love.

Overall, I give this episode a

on the Rick and Morty scale.

Wubba-Lubba-Dub-Dub, I need a drink. See you in two weeks.

PREVIOUS – 34: One Crew Over the Crewcoo’s Morty

One thought on “Rick and Mondays – S4E4 “Claw and Hoarder: Special Ricktim’s Morty””