Dr. Gregory House (Hugh “Seriously, I have range guys” Laurie) is basically Sherlock Holmes with a medical degree, a Vicodin addiction, and a limp. Never forget that Holmes was a cocaine and morphine addict, kids. 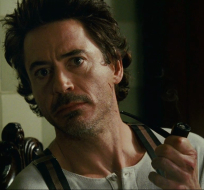 Really, making a Holmes medical drama is extra fitting, because the inspiration for Sherlock Holmes was Joseph Bell, a Scottish Surgeon famous for his demonstrations of deductive reasoning. It somehow brings everything full-circle. In addition to being extremely intelligent and observant, House is a Vicodin addict, has a pronounced limp, and is an almost entirely insufferable human being. But, his worth as a diagnostician usually outweighs the difficulty of working with him.

This episode is the closest thing I have to an example of a pataphysical structure. It’s not really one, because it doesn’t quite go far enough, but it’s close. In this episode, we see someone tell a supposedly true story, or three…