Fry (Billy West) has been learning to play the holophonor since he found out Leela (Katey Sagal) finds musicians irresistible. Bender (John DiMaggio) attends his recital only for Fry to fail miserably. Fry insists that he has beautiful music in his head, but his teacher says he has “stupid fingers.” Fry and Bender head to Robot Hell to make a deal with the Robot Devil (Dan Castellaneta). The Robot Devil offers to replace Fry’s human hands with a random robot’s hands so he can play the holophonor. He spins the wheel which lands on Bender… before clicking one more and landing on the Robot Devil himself. Unable to back out of a deal, the Robot Devil switches hands with Fry.

With his new hands, Fry quickly masters the holophonor and becomes a hit musician complete with records and live performances. Leela is successfully impressed by his music. The Robot Devil tries to convince him to give his hands back, but Fry refuses. The Hedonismbot (Maurice LaMarche) commissions Fry to write an opera, which he agrees to do if he can write it about Leela. As Fry works on it, he insists that Leela not listen to it until he’s done. The Robot Devil enacts his “ridiculously circuitous plan” to get his hands back and trades Bender an airhorn in exchange for his crotch-plate, which leads Bender to accidentally deafen Leela the day before the Opera premieres.

Fry’s Opera opens, but Leela refuses to let Fry know that she can’t hear. The First Act of the Opera deals with Leela’s past and is heralded as a triumph. At intermission, Leela says she would do anything to hear the rest of the Opera, so the Robot Devil offers to trade her robotic ears for her hands. She refuses, so he asks for just one hand. She agrees and he gives her robot ears. He tells her that he will take her hand later, allowing her to hear the rest of the Opera. During the Second Act, Fry is portraying the Robot Devil’s deal from the beginning of the episode, which offends the Robot Devil. He jumps onstage and demands his hands back or else he’ll take Leela’s hand… in marriage. Fry agrees and gives the Devil back his hands, but is unable to complete the Opera with his old hands. As the audience leaves, Leela stays and asks Fry to keep playing, saying that she wants to hear how it ends. Fry manages to play an image of Fry and Leela kissing and walking away together.

Futurama has an unusual affinity for doing solid finales. They were essentially “cancelled” on 4 occasions and on each of them they managed to deliver a touching finale that focused on the primary relationship of the show: Fry and Leela. This was the first and, in many ways, the least concrete, but it still gave us a beautiful send-off.

The idea of Fry becoming a musician was set up in the episode in which he got brain worms from a sandwich, something that is referenced in this episode. Leela has repeatedly mentioned her affinity for musicians, such as her ex-boyfriend Sean, so this was a great way for Fry to finally impress her. However, unlike the brain worm episode where Leela was only impressed by Fry when he could play an instrument well, here, Leela finally realizes that what she loved was the beauty in Fry’s soul that came out through his music. Even though he can’t play properly with normal hands, she still sees that beauty.

Overall, just a fantastic episode and a great way to end the show. Of course, next week I’ll have to start on the four Futurama movies that ended up reviving the franchise for essentially the same number of episodes as already aired. Meaning I only just got past halfway with this.

WHY COULDN’T YOU GUYS HAVE VOTED FOR WESTWORLD???

I really do quote this episode frequently so it’s hard for me to pick. Here’s the top three:

3. The Devil’s objection to the opera.

Upon seeing his character call himself “stupider” onstage, the Robot Devil interrupts the Opera by saying “Your lyrics lack subtlety. You can’t just have your characters announce how they feel. That makes me feel angry.” Aside from showing a hilarious lack of self-awareness, this is the opposite of how most operas work. Usually characters not only tell you how they’re feeling, they sing a solo about their rage or affection.

At multiple points during the episode the Robot Devil misuses the term ironic only for Bender to correct him. Then, when the Robot Devil points out that he bargained for Leela’s hand but is using it as an expression of “hand in marriage,” Bender reads from the dictionary: “The use of words expressing something other than their literal intention… Now that is ‘irony’.” Admittedly, Jagged Little Pill by Alanis Morissette had been out for a while, so everyone had already had a fight about the definition of ironic, but I still find this a fun gag.

Look, just because it’s popular doesn’t mean I don’t find it hilarious. After Fry loses his hands, he says that he can’t continue the Opera. Zoidberg responds with “Yes you can! The beauty was in your heart, not your hands.” Fry then attempts to play, poorly, and Zoidberg immediately turns on him, shouting “The music’s bad and you should feel bad.” It’s probably the best representation of an audience at any open-mic night I’ve ever been to. They’ll encourage you to try, then destroy your self-esteem. 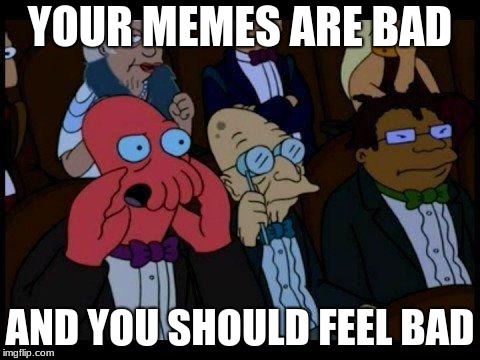