Futurama meets D&D years before Rick and Morty would try to do the same.

This is my least favorite of the four films based solely on the fact that I don’t think they spent enough time on the fantasy world to justify it as a subplot. It’s like one-third of the film and the time crunch requires them to blow through a lot of Lord of the Rings jokes a bit too quickly. Don’t tell me they couldn’t think of other fantasy gags, they barely even dipped into making any actual Dungeons and Dragons references.

It doesn’t help that the rest of the plot seems largely to be filler. Leela’s shock collar was apparently just an excuse to get her to say swears that could be censored by the collar. Igner being Farnsworth’s son seems pretty logical within the series, it’s just odd that it wasn’t revealed until now, when the character is in his 30s and has repeatedly interacted with Farnsworth. Mom having captured the Nibblonians, including Nibbler, seems to be random, given that the Nibblonians have an unknown home planet, physics-defying abilities, and superior technology. I do appreciate the commentary on business monopolization, but it still feels like they never quite focused on anything long enough to make it feel important.

Still, it’s got some good moments and it actually set up a number of things that would play out during the new series of Futurama.

There’s a few good ones:

“Care for a slice of Scroto?”

“The king went insane and declared war on the scallops. Tied his army to a boulder and pushed them into the sea. They never returned. Scallops must’ve got them.”

As someone who lived through the 90s, I remember when Star Trek came back with The Next Generation, Deep Space Nine, and Voyager… then when it fell apart with Enterprise. Not that it was that bad, but it had some issues. 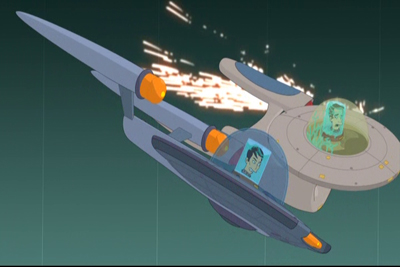 Cubert (Kath Soucie) and Dwight (Phil LaMarr) and two other kids are playing Dungeons and Dragons because they’re nerds. Bender (John DiMaggio) walks in and doesn’t understand how it works, revealing he has no imagination. On a delivery, Bender complains to Fry (Billy West), who tells him to try imagining something. They get interrupted by the ship running out of fuel. Leela (Katey Sagal) pulls into a gas station run by Mom (Tress MacNeille) where dark matter prices have skyrocketed. While refueling, the ship is mocked by Sal (DiMaggio), a trucker who brags about being a demolition derby champ. Despite Farnsworth (West) cracking down on fuel waste, Leela steals the ship to go to the demolition derby. She ends up winning, though the ship is badly damaged. As punishment for her anger issues, Hermes (LaMarr) gives her a shock collar.

Bender goes to play D&D and eventually discovers he has an imagination, making a character named “Titanius Anglesmith, Fancy Man of Cornwood.” Unfortunately, activating his imagination makes Bender lose his grip on reality and start believing he actually is a knight. He goes on a rampage while Zoidberg (West) forces Leela to have dinner with her parents to work on her anger issues. They reveal that they believe Leela does have anger issues, even though she says it’s just that she hates Zoidberg. Bender attacks the restaurant, but Fry roleplays a wizard and disables him. Bender is sent to the HAL Institute from “Insane in the Mainframe.” He fails to respond to any treatment and is set to be lobotomized.

Mom goes on television to talk about the dark matter shortage, but after she goes off the air she immediately reveals that there is no shortage, she just has monopolized the supply and lied about it to drive up fuel prices. The Professor reveals that he had developed dark matter fuel for Mom through a botched experiment that produced a crystal that enabled dark matter combustion throughout the universe. He also reveals that there is a second crystal which, if it were to come in proximity of the original, would render all dark matter inert, but he lost it. It turns out that it’s the twenty-sided die used by the boys for D&D, though the Professor doesn’t know that. The Professor activates a device that makes the crystal emit a foul odor so he can find it, but this also alerts Mom to its presence. She sends Walt, Larry, and Igner (Maurice LaMarche, David Herman, and DiMaggio), her three Stooge-like sons to get the crystal. They’re immediately thwarted by Farnsworth, who finds the “anti-backwards crystal.”

With the anti-backwards crystal in their possession, the crew heads to Mom’s dark matter mine fortress to destroy the dark matter crystal so that Mom will lose her stranglehold on fuels. Mom sends Walt and Larry to stop them with an army of killbots, but doesn’t send Igner because of a dark secret that she tells the other two. Igner overhears it, as well. The crew uses a distraction to avoid the killbots and sneak in. They find that Mom has captured all of the Nibblonians (Frank Welker) and is force-feeding them to produce dark matter from their poop. Igner betrays his mom and leads the crew to the control room. Farnsworth almost gets the crystals close enough to touch, but he ends up screwing it up. The presence of the two crystals make all dark matter in the universe glow, including a huge amount inside of Bender, which combines with his imagination to transport himself and the cast to “Cornwood,” the fantasy land he imagined.

Leela is now Leegola the centaur, Fry is now Frydo the guy who has the “Die of Power,” and Bender is the knight Titanius Anglesmith. The “Die of Power” is the anti-backwards crystal which casts magic spells when rolled. They meet the great wizard Greyfar (Farnsworth) who tells them that Momon (Mom) forged the Dice of Power and it can only be destroyed by throwing it into the molten plastic that made it. They set out to destroy the die and meet Hermaphrodite (an intersex Hermes), another centaur. It’s revealed that centaurs are mighty archers, but also pacifists, to Leegola’s annoyance. The group, sans Hermaphrodite, heads to the Cave of Hopelessness where they meet Gynecaladriel (Amy as played by Lauren Tom), queen of the “Water Nymphos,” as well as a monstrous Zoidberg, who Leegola brutally murders, only to find out he wasn’t going to hurt them. She vows to be a pacifist and joins the other centaurs. Frydo defeats the Tunneling Horror using the Die of Power, but becomes a Gollum-like creature obsessed with the die. Momon’s armies arrive to attack them and the group tries to gather an army at the Wipe Castle.

Frydo goes crazy and tries to kill Titanius, but fails and runs off. The rest of the group gets to Wipe Castle, only to find that the king, Roberto (Herman), is insane and killed the entire army. Momon’s army attacks the castle and quickly gain the upper hand until Leegola and the centaurs show up and quickly win the fight. Leegola had beaten up Hermaphrodite rather than debate the merits of violence. As a reward for helping them win, Gynaecaladrial kisses Leegola. Frydo makes his way to the “Geysers of Gygax” where the die can be destroyed, and the group agrees to help him destroy the dice after they finish watching Gynaecaladrial and Leegola kiss. Frydo fights Momon but ends up losing after the rest of the gang becomes trapped on a bridge. Greyfarn discovers that he is the father of Momon’s youngest son, Ignus (Igner), but Momon obtains the die and ends the fantasy world.

Back in the real world, Farnsworth says that Bender’s imagination was boosted by the dark matter and created an alternate reality. Farnsworth asks to hug his son, Igner, but they reveal that they’d both swallowed the two crystals, and their hug puts the crystals in close enough proximity to render dark matter inert. The crew then leaves by having the freed Nibblonians pull the ship.

NEXT – Episode 76: Into the Wild Green Yonder