By The Grouch on the Couch

Well, the Grouch and I saw the film. While I was going to write a review, he felt particularly inspired and decided to go ahead and do the entire thing in a parody of Samuel Taylor Coleridge’s “Rime of the Ancient Mariner.”

My rebuttal shall be in the form of short limericks. I don’t promise that they’ll work.

There was an aquatic superhero

Long mocked for powers and logo.

To make him badass through Khal Drogo.

But fortune favors not the brave but wise,

For though his hot body might carry a film

This dialogue breaks his back.

I start with a story summary

As clear as a winter morning.

And so you assholes don’t complain,

was born from the strange love

Between a queen from Atlantis below,

And a lighthouse keeper from the world above.

But happiness is forbidden,

When you tell a hero’s genesis,

So soon she was forced to return,

Victory in their movie,

That makes the fangirls, and guys, woozy.

Is actually quite glorious

And emerging, smiling and victorious.

Arthur saves a submarine, the target which

And earns his eternal ire.

When Arthur returns to the surface,

Who tells him his half-brother

Has grown up to be quite mean. 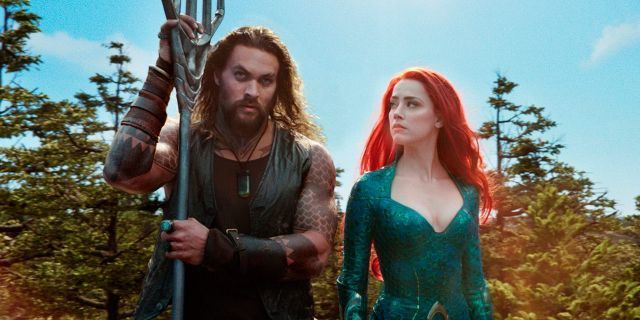 Orm wishes to destroy the surface,

Because the movie needs a plot,

And he needs the support of other sea-kings,

For reasons I forgot.

Arthur tries to beat him in a fight

But Orm is slightly stronger

Cuz it’s only been an hour

And says Arthur needs to Quest

For the First Trident of Atlantis

While each ogles the other’s chest.

What follows is a fetch quest

That takes a f*cking hour,

And of course the twist is “talks to fish”

Ends up being the greatest power.

He goes through the Sahara,

Swims below the Marianas Trench

And into an underground sea.

And kicks his brother’s ass

While wearing the green and gold outfit 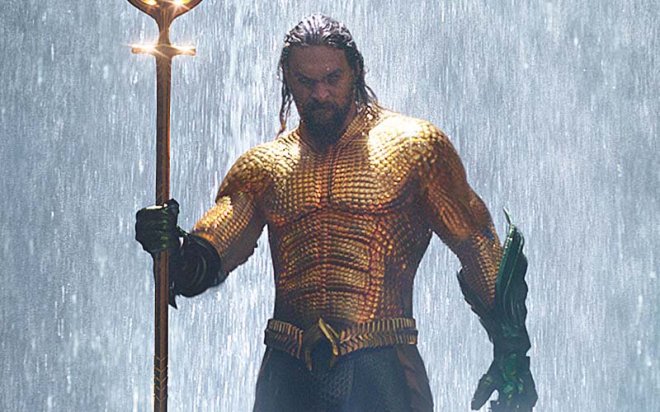 Here the film is ended,

But now let’s talk about

What things the editor should have left in

And what should have been cut out

The acting is pretty solid,

The cast all pretty, too,

From Jason Momoa to Amber Heard

And Patrick Wilson’s Orm, all woo

The effects are indeed special,

And, no, that’s not sarcasm

The glowing effects that define the sea,

From building to sargassum

The film creates an immersive world

Did make some scenes more fun

With some scenes even stirring

The cinematography was oft on point

While fight scenes were occurring.

But alas the dialogue is bad

Too bad for me to mention.

It repeated so often and was so dull

It was hard to pay attention.

To drag a movie down

But really the lines were so damned bad I hoped

That everyone would drown.

The plot is so generic

That I swear they say “fetch quest.”

And these two awful elements

So while there were some great scenes

I could not recommend a watch

I hated this film, not just because

It had so much potential

But also because I fear the profit

And thus DC has let me down

For five out of six times

So here I end this film review

Cuz I’m now out of rhymes

I wish there was a scene in Nantucket
So it’d be easier to tell this film s*ck it.
The plot was mundane
The dialogue insane
And I wish I’d just left and said “f*ck it”

If you say that this doesn’t rebut
Well, I’d try but it’s open and shut
This movie was lousy
I spent half the time drowsy
And wishing someone had yelled “cut”

Well, Creed II came out and I saw it after Thanksgiving with a group of degenerate reprobates. We also call them lawyers.

SUMMARY (Spoilers if you haven’t seen any trailers)

Adonis “Donnie” Creed (Michael B. Jordan) has been winning multiple fights following his loss by decision to “Pretty” Ricky Conlan (Anthony Bellew) in the last film. He’s also moved from Light Heavyweight up to Heavyweight, it seems, but that doesn’t really get mentioned. Finally, he’s fighting for the WBC Heavyweight Title once held by his father Apollo Creed (Carl Weathers) and his trainer Rocky Balboa (Sylvester Stallone). He wins the fight against the past-his-prime champion Danny Wheeler (Andre Ward) then proposes to his girlfriend, Bianca (Tessa Thompson). However, he is soon challenged to a fight by Viktor Drago (Florian “Big Nasty” Munteanu) the son of Ivan Drago (Dolph Lundgren), the man who killed his father in the ring. Since this is a boxing movie, there will be boxing.

Okay, so, the Rocky series has been, well, uneven in the past. The first film is one of the most inspiring stories of perseverance and human will on-screen. The second film was… that movie over again but this time Rocky wins. The third film was the campy story of Rocky having everything, losing it all, then getting it all back. The fourth film is him winning the Cold War in the most campy way possible that’s still awesome. There is no fifth Rocky, but the sixth Rocky is almost as good as the first and has almost none of the campiness of its predecessors. Creed was close to the first film in terms of sincerity and inspiration.

So, if Creed was closer, spiritually, to the first movie, then it makes sense that this one would be closer to Rocky II, but the filmmakers decided to instead combine the next three films by having Adonis become champion, deal with the thought of losing it all (sadly, not to Mr. T), then confronting a person who killed someone close to him (albeit, by surrogate). However, while the film series became slowly campier, less realistic, and more prone to corny subplots or pointless characters, this film… mostly avoids that. I say mostly because one subplot in the movie is that Rocky keeps trying to get the city to replace a streetlight and it’s honestly weird that it comes up in 3 scenes without ever being resolved. Aside from that, the film is mostly serious, dealing with the emotional states of all of the characters.

Here are the real pros of the film:

Michael B. Jordan is a hell of an actor. Possibly the best that’s been in the series and given that Burgess Meredith was in the original, that’s a hell of an accomplishment. He can be funny, serious, threatening, sad, scared, or desperate and none of it ever feels contrived or out of character. Similarly, Sylvester Stallone actually gets to remind us that he is an actor of some pedigree when he plays the older Rocky, who is starting to view Creed as a surrogate son just as he faces potentially dying in the ring. Their interactions stay just as fresh as the last film.

Reintroducing Drago should have been a terrible idea, but instead of being the cartoonish villain he was in Rocky IV, we’re instead shown a man who lost everything because of one fight. Drago’s wife left him, he’s broke, he lives a terrible life in Ukraine, and his only comfort comes from dreaming of the day when his son will become a success. While they don’t actually make Ivan Drago particularly sympathetic throughout the film, they do a solid job of making his son Viktor, the focus of much of Adonis’ anger and insecurity, actually seem like he’s a victim of his circumstances rather than an outright villain. Unlike Rocky IV, we do actually see both sides going through an actual character arc, rather than just side-by-side training montages.

However, there are training montages and, while I’m sad that they don’t take place in the Ukraine mountains, they are excellent. Under Rocky, Adonis’ regiment is basically a form of torture masquerading as a workout. Through the magic of movies, though, this makes him stronger rather than causing massive internal organ failure. It’s awesome.

The final fight of the movie is extremely exciting. After all the build-up, the film milks every blow, often in slow-mo, for everything that it’s worth. People were literally applauding at the end of the rounds in the theater, and I could not blame them. I like watching boxing, but this was much cleaner and more fun for casual viewers.

Also, everyone on Earth should want Apollo Creed’s gravestone.

Now for the cons:

The music in this is, for the most part, not as good as its predecessor. Or the original Rocky or Rocky III. For the record, only 3 people have ever done the music for the Rocky series, with Bill Conti doing every Rocky movie except for Vince DiCola’s Rocky IV compositions. Ryan Coogler’s collaborator Ludwig Göransson did both Creed and this film, however, the music in this just isn’t as pleasant or original. Partially because they did more music in Tessa’s style which involves being deaf. I was also deeply upset that there wasn’t a cover of “Livin’ in America” played during Creed’s entrance to fight Drago. His dad got James Brown to do it live, he could at least have gotten an impersonator.

While the last fight is pretty spectacular, the other boxing matches in the film don’t have the smooth steady-cam from the last film and, frankly, they look a little half-assed compared to the end. I understand that they wanted the last fight to stand out, but I also don’t think they needed to lower them as much as they did in order to do it.

Rocky’s streetlight will remain a mystery unless it gets brought up in the next movie.

Overall, it’s a fun movie. It’s definitely one of the lower Rocky films, but, since there’s really only one bad Rocky film, that’s still saying something pretty good. If you liked the series thus far, you’ll like this.