I take a look at the 2014 Australian Horror Film that has quickly distinguished itself as a masterpiece of psychological horror.

Amelia Vanek (Essie Davis) is a widow raising her six-year-old son Samuel (Noah Wiseman) after her husband Oskar (Ben Winspear) died driving her to the hospital to give birth. Sam has a lot of eccentricities, including sleep issues and an obsession with building weapons to fight imaginary monsters. One night, Sam asks Amelia to read him a book called “Mister Babadook.” It contains a story about a creature who dresses in a top hat, a coat, and taloned gloves, whose presence is announced by three loud knocks. It tortures whoever knows about it until it eventually makes you wish you were dead. Sam, terrified by this, won’t stop screaming and becomes convinced the monster is real. His constant terror leads her to have to stay up comforting him.

As time passes, Amelia starts to find signs that Sam is acting out, but Sam says it was the Babadook. Because of this, she destroys the book of the Babadook. At his cousin Ruby’s (Chloe Hurn) birthday, Sam gets upset about Ruby mocking him for not having a father, so he shoves her out of a tree house, injuring her. On the way home, Sam sees the Babadook and has a seizure, so Amelia gets a prescription for sedatives.

The next day, she finds the Babadook book reassembled on the front door with new words saying that the harder you deny the Babadook exists, the stronger it gets. It then depicts her killing her dog, her son, then herself. She burns the book then receives a call of a voice saying “Ba Ba-ba Dook Dook Dook,” the creature’s signature. She tries to report the incident to the police, but becomes afraid when she sees the Babadook’s costume in the police station. Amelia starts to see visions of the Babadook, leading her to become increasingly disturbed and aggressive towards Sam. She starts to have dreams of murdering him. Eventually, she sees an image of Oskar saying that he’ll come back if she kills Sam. Amelia realizes this is just the Babadook in disguise, but ends up possessed by him.

Amelia tries to kill Sam, but he manages to knock her out using his anti-monster weapons. She awakens and tries to kill him again, but he shows her that he loves her and she vomits up black mist, purging herself of the Babadook. Sam reminds her that you can’t get rid of the Babadook and he’s pulled upstairs. She chases after him and confronts the Babadook, driving him into the basement and locking the door.

The two are later shown doing much better, with Amelia being much more attentive and caring towards her son. It’s also revealed that the Babadook is still alive, and Amelia is feeding it earthworms in the basement.

First of all, the Babadook is one of the better monsters that has been made in the last few years of horror. It’s not just that it’s creepy, it’s that it gives you exactly enough information to make itself seem so much worse. According to the internet, a constantly accurate and reliable source, the Babadook is only on film for about 3 minutes in a 94 minute movie, but it uses those short appearances to the fullest. Its powers are mysterious and appear to be inconsistent throughout the movie, but that’s only because the Babadook serves more as a metaphor than an actual monster, and that’s scarier than almost any machete-wielding man in a mask. This is a monster you will likely actually face one day: Loss.

Throughout the movie, it’s made clear that the Babadook is a representation of Amelia’s feelings of loss for her dead husband and her repressed anger at having to be a single mother. Sam is not exactly an easy child, to the point that Amelia’s sister even says she doesn’t like him, but that’s because he constantly thinks that some invisible force is attacking his home. The reason he thinks this is likely that he sees his mother reacting to her memories of Oskar, which cause her to show signs of being in pain despite nothing physically happening to her. In other words, even though the loss is solely hers, it spreads to hurt her child, the same way that even though she’s the one that is possessed by the Babadook, it ends up causing her to take it out on Sam.  It’s coming to a head now, because, as it’s almost Sam’s birthday, it’s almost the anniversary of Oskar’s death.

Because this is a Hollywood movie, we naturally also have to see grief involve the five stages of the Kübler-Ross Model. When the Babadook first starts to appear, we see Amelia denying it, which makes sense as she’s been denying her feelings for several years. Next, we see her become angry at Sam, blaming him for her feelings and for her inability to move on. We see her considering bargaining Sam’s life for Oskar’s, though she quickly rejects that. Then, we finally see her sitting, unmoving, on the couch watching old movies on TV, something indicative of depression. Finally, we see her confronting her grief and accepting it, learning to live with her loss.

The movie also does a good job of showing us that it’s all aspects of loss. Amelia is shown to be unable to masturbate because Sam constantly ambushes her in the night. She’s shown to gaze longingly at a couple making out in a car, because she hasn’t had anyone in 6 years. Her sole focus in her life has to be her son, due to his issues, but that doesn’t stop her from remembering when she had someone to help with her basic needs. Moreover, her focus has been so great that she never has really had time to grieve for her loss, and that’s what ultimately brings forth the Babadook. As with any loss, you can’t ever really get rid of it, the same way that you can’t get rid of the Babadook. The more you deny your feelings on it and repress them, the stronger the feelings of loss will become, much like how the Babadook gets stronger the more you deny his existence. Eventually, your feelings will start to control your actions, leading you to do things you normally wouldn’t. The only way to regain control is not to deny your feelings, but to admit you have them and learn to live with them. The movie also shows that it helps to have someone you love when you do it, symbolized by Sam’s love purging her of the creature.

One of the best elements of the movie is the “Mister Babadook” book. Not only does its eerie imagery and haunting rhyme foreshadow the events of the film, but we also only see parts of the pages, hiding some of it the same way that the monster itself is hidden. Interestingly, there are parts of it that I think you can only see by reading the actual, printed version of the book. The ending, particularly, is important. The last few pages contain the following rhymes:

Dare to look me in the face, try to put me in my place,

I will cause you so much strife, but you might just get out with your life.

Whether adult or child, best to give me a home

Put the welcome mat out, with a room of my own

Accept that I’m here, and from you I have grown

Keep me smaller in size, I might leave you alone.

This makes it explicit that the Babadook is something that comes from the person reading the story. It doesn’t exist on its own, it’s only a thing that grows out of you. I appreciate the restraint it must have taken not to include this in the movie and leave some ambiguity for the viewer about the nature of the monster. 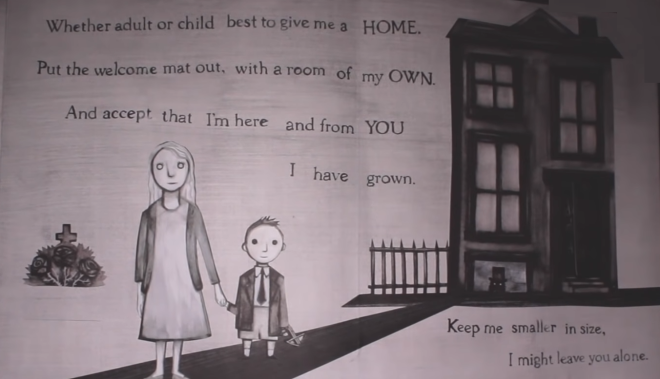 This was the first movie by director Jennifer Kent, who also wrote the script and the short-film that inspired it. This was a hell of a first outing, is what I’m saying. She wrote a solid horror movie that has a solid message underneath it. I haven’t seen her second film, The Nightingale, yet, but I see it mostly has positive reviews despite its intensely horrifying subject matter. She’s someone to keep an eye on for sure.