Sometimes my readers love to torture me. This is one of those times. Honestly, I think I have been putting off doing reader requests specifically to avoid watching this episode again. As you’ll note from my list of the 100 Greatest Episodes, plus another review since then, I think highly of the show Star Trek: The Next Generation, but it’s not perfect. Sometimes, they missed the mark, and this episode is definitely not a bullseye. This is more akin to throwing the dart, missing the board entirely, and having it ricochet into your buddy’s eye. It’s not the worst episode of TNG, but it’s solidly in my bottom five. If you want to know my least-favorite TNG… well, request it. I’m not watching that piece of shit again without reason.

That’s enough background, on to the creepy ghost sex! 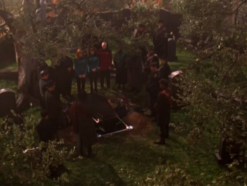 The episode begins at the funeral for Beverly Crusher’s grandmother, Felisa Howard (Ellen Albertini Dow), who was apparently a doctor on a Scotland-esque planet called Caldos IV. During the funeral, Crusher sees a weird guy (Duncan “I was Zorro in the 90s” Regehr) leaving that apparently does something to her ladybits, but from her face might just have been gas. No one else appears to have seen him. 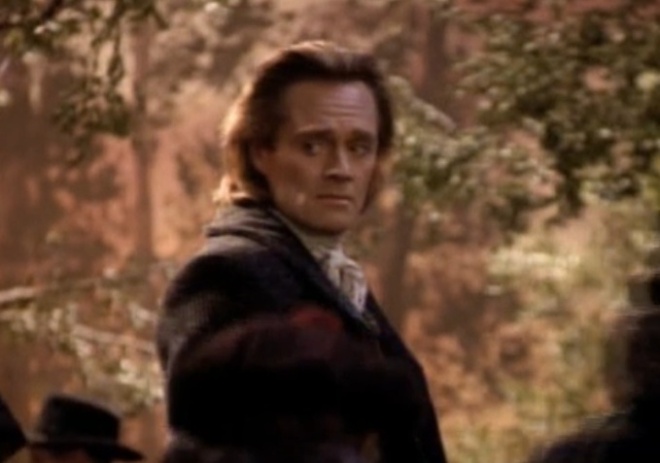 Crusher goes back to her grandmother’s cottage (which, despite it being the future, is still a cottage), and looks through it for mementos, finding her grandmother’s diary and a candle which apparently had great spiritual value to the Howard Family (Crusher’s maiden name). As she heads upstairs, a man named Ned Quint (Shay Duffin) enters and blows out the candle, saying that it was bad luck for her grandmother. Beverly kicks him out, because that’s what you do to creepy strangers who come in and mess with your stuff.

Back on the Enterprise, the engineering team determine that there is a problem with Caldos IV’s weather system, and that an unexpected storm is brewing. Subtle. Meanwhile, Crusher has been reading her grandmother’s diary and discovered that, despite being 100 years old, her grandmother was in a casual sexual relationship with a man in his 30s named Ronin. From the diaries, it appears that Ronin started seeing Crusher’s grandmother, Felisa, shortly after the death of her own mother. Since we already had dialogue in the episode that mentioned that Crusher’s own mother died when she was young and that her grandmother raised her, this is the creepiest foreshadowing ever.

While Crusher sleeps on the ship, a ghostly presence starts to undress her then says her name, waking her up. Crusher goes to talk to Counselor Troi about it, saying it’s a dream, and the dialogue in this scene might be the worst in almost any episode of any version of Star Trek. Not just because Crusher is discussing reading a “particularly erotic chapter of [her] grandmother’s journal,” something that SHOULD NEVER BE IN A TV SHOW, but because it comes off as a weirdly clinical discussion about sexuality. I suspect this is tied in to the fact that women getting sexual gratification, even in the abstract, is essentially guaranteed to get your ratings boosted to MA, but maybe the person writing the dialogue just hadn’t ever heard anyone talk about sexual experience. The credit for the screenplay is a woman (Jeri Taylor), while the teleplay credit is a man (Brannon Braga), so I ultimately have no idea what led to the weird-ass sequence between these two characters.

The next day, Crusher visits her grandmother’s grave and runs into Quint (sadly, not the one from Jaws). Quint warns her that a ghost is causing the weather problems, and that if she lights the candle, the ghost will come for her. He also warns her not to go to her grandmother’s house. However, a thunderstorm comes up, which prompts the Enterprise crew to start working on fixing the weather control system. Crusher is forced to take shelter in her grandmother’s cottage, finding it full of flowers.

She hears things moving around the house and sees the reflection of Ronin (the guy from the funeral) in a mirror. Ronin talks to her as a disembodied voice, telling her that he was the visitor from the night before. She moves to call the Enterprise, but is struck with sudden disorientation and either arousal or pain (maybe both?). The voice says that it loves her, just as it loved her grandmother before her. It claims it was born in 1647 in Glasgow and lived with Crusher’s ancestor Jessel Howard, then stayed with every Howard woman after the last one died (apparently the surname was matrilineal until Beverly?). This includes moving to Caldos IV at some point.

The spirit then tries to “merge” with Crusher, which she resists… only for her to be seen back on the Enterprise acting as if nothing has happened. When Troi questions her, she says that she’s “seeing” Ronin, but only in the physical sense. 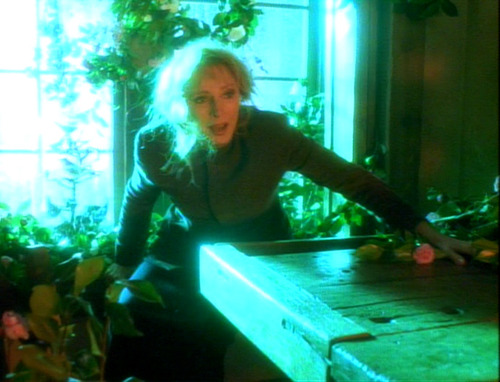 On the bridge of the Enterprise, fog is rolling in, as weather control is now malfunctioning onboard the ship. The crew catches Quint trying to alter something on a panel, saying that someone is going to kill them all. An energy discharge kills Quint before he can explain. Beverly determines that he was killed by an anomalous energy pulse, meaning it was no accident (Dun dun duuuuun).

Beverly returns to the cottage to talk with Ronin, who is now corporeal, but only for a few minutes at a time. Ronin begs her to light the candle, which is where he lives. She has to go back to the ship to get it, while Ronin travels to the ship in a beam of energy. She lights the candle in her quarters on the ship, which allows Ronin to appear and merge with her. Crusher then resigns her post with Starfleet and states her intention to become a healer on Caldos IV. Picard is unable to stop her, legally. Searching for the energy source that killed Quint, Geordi and Data find it coming from Crusher’s Grandmother’s grave. Crusher and Ronin “merge” again, this time in a manner which appears pretty much fully sexual. Picard comes to check on Crusher, finding her in a mildly compromising position. 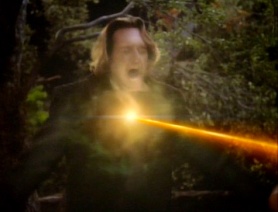 Picard points out that something is wrong with Crusher, forcing Ronin to appear as himself. Picard questions Ronin until he disappears, resulting in Ronin shocking Picard in the same way that he killed Quint earlier. Refusing to let Picard die causes Ronin to separate from Beverly, with Ronin intent on stopping Geordi and Data from exhuming Felisa Howard’s grave. Ronin, in Felisa’s body, rises from the grave and disables the pair. When she arrives, Beverly realizes that Ronin is an Anaphasic lifeform which has to bind with a host in order to keep living, finally destroying the candle. Ronin tries to possess her again, but she kills him with a phaser, before dropping to her knees crying.

At the end of the episode, Crusher and Troi are talking about the fact that Crusher is somewhat sad that she couldn’t be with Ronin, because he made her grandmother very happy.

This was not an easy re-watch, and I was tempted to just do it from memory, but in the end I caved.

Here’s the thing about this episode: It never feels anything but creepy to me. Crusher says at the end that Ronin “seduced” her and her grandmother, but the first time we see her interacting with him, he’s undressing her while she sleeps. The next time, he keeps her from calling out to the Enterprise, makes her physically weak, then apparently “merges” with her without her consent. From then on, we’re shown that she’s now almost physically dependent on Ronin, to the point that she’s shaking like a heroin addict while waiting for him on the ship. He’s literally corrupting her mind to make her want him. Nothing about this is “seduction,” unless you have a very messed-up idea of courtship. And that could very easily have been brought up at the end. Beverly could have expressed some anger at the fact that she was basically mind-raped for the entire episode, but no, instead, she says “oh, who cares if he literally manipulated her mind to make her love him, as he had done countless times before, he made her happy.” And then she’s kind of sad that she couldn’t just stay happy with Ronin. I get that the ghost orgasms were really good, but, seriously, he was clearly altering your mind, woman!

This isn’t a new concept, that maybe it’s worth losing your free will to gain happiness. And if the story was about addressing that idea, maybe it wouldn’t be so bad, but it’s not. That’s not even a particularly great concept to address in Star Trek, since one of the primary conceits of the series is that humanity is basically always in a state of self-actualization, which makes it basically incomparable to the search of happiness in the modern world, where humans rarely achieve that point in their lives. So, the ghost banging continues to seem more akin to sexual assault and brainwashing than seduction or pleasing. This episode kind of reminds me of why I don’t like some modern “semi-erotica” like 50 Shades of Gray, because it’s basically treating an abusive relationship as just being sexually aggressive.

Also, everyone’s behavior in this episode is a little off. First, no one seems to be super weirded out that Crusher would have sex with a guy who had just been sleeping with her grandmother. I dunno all of what happened in the next 350 years in Star Trek, but I really hope we don’t follow the timeline that assimilated “normal to be wiener cousins with your grandmother” into the culture. And, understand, this isn’t like a distant relative Beverly never met, her grandmother is the one who raised her, making her effectively her mom. Second, Crusher really doesn’t seem affected by the fact that Ronin straight up kills a guy for almost no reason. Despite the fact that she’s later extremely concerned when Picard gets mildly injured. Is it that it’s Picard who is her on-again-off-again love interest? Maybe, but it’s still weird that a guy gets killed and nobody really comments on it. Third, what the hell is wrong with Troi? Why does she never realize that Beverly, one of her closest friends, is being controlled by a strange force? Instead, she basically keeps advising her to “go with it.” She’s the worst counselor ever.

The dialogue in this episode is also notably bad, even by Star Trek standards (look, I love the shows, but the dialogue is generally either crap or gold, no in-between). On Memory Alpha, there’s even a quote by writer Rene Echevarria that he can reduce this episode’s writer to a shuddering mass by saying “I can travel on the power transfer beam,” a particularly stupid and useless line that somehow still made it into the episode.

The episode’s inspiration, The Turn of the Screw by Henry James, also doesn’t really help sell any kind of love story. If you haven’t read it, go read it now, it’s not particularly long and it’s online for free . Or, if you’re gonna be lazy, let me just summarize it as “governess looks after two young children while dealing with a haunting by two former lovers.” Ultimately nothing about the story really lends itself to this idea of an “inherited ghost lover,” except for the gothic setting.

So, I don’t like this episode at all, and I regret watching it again to write this review. I had to re-watch “Darmok” just to get the taste out of my mouth. Thanks, readers, for torturing me again.