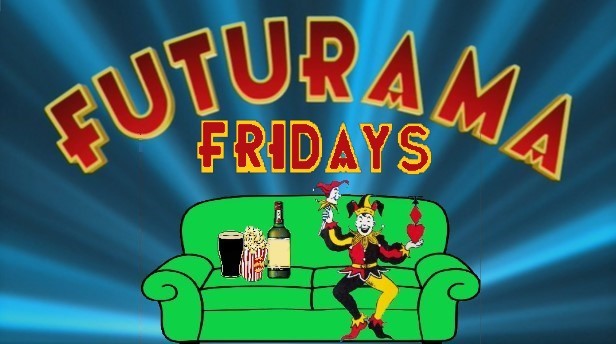 Welcome to the second episode of the show. It’s the way we really get welcomed into the status quo of the series after the pilot set it up.

Professor Farnsworth shows his new employees Fry, Bender, and Leela an ad for Planet Express which advertises the company as having a replaceable crew, something that clearly drives employee loyalty up.

At breakfast, Fry is talking about how he’s having trouble adjusting to the 31st Century, including the new cereals “Admiral Crunch” and “Archduke Chocula.” For the record, according to the US Navy’s Website, an Admiral is 4 ranks above a Captain and, according to Wikipedia (not a good source, I know) an Archduke is typically 4 ranks above a Count, so it’s good to know that the mascots’ careers advanced at the same rate. Granted, Chocula probably had to off a few people to get up the ladder, but he’s still below King Candy. 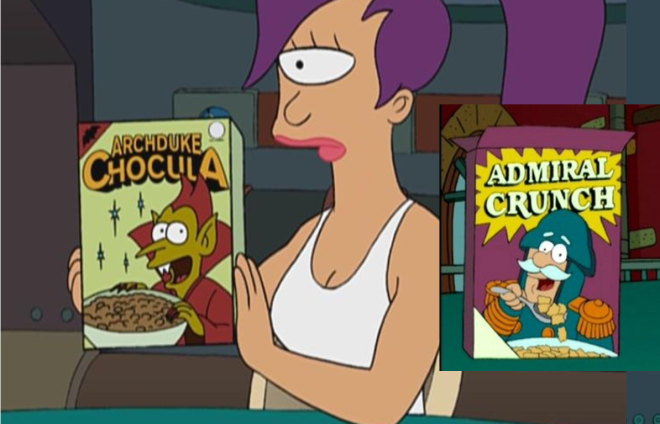 The crew is introduced to Hermes Conrad (Phil “I’m Samurai Jack, mother*ckers” LaMarr), a Jamaican accountant and professional bureaucrat. Farnsworth also appoints Leela the captain of the ship, disappointing Fry. Fry is sent to meet the staff doctor, Dr. John Zoidberg (Billy West), a large crustacean from the planet Decapod 10. Zoidberg, despite being the staff doctor, has essentially no knowledge of human anatomy or medicine, something that somehow was used sparingly enough that it never really felt old in the show. Impressive. They also meet Amy Wong (Lauren Tom), Farnsworth’s engineering doctoral candidate and an heiress to a fortune so large that the concept of money isn’t real to her. Also, she wears a pink track suit to piss off her parents.

The crew, along with Amy, go on a delivery to Luna Park, on the moon, something that excites Fry the way that, well, going to the moon should excite anyone. However, it only takes them about 2 seconds to actually get there (the moon is only 1.3 light seconds away from Earth, so that tracks), killing the grandeur of the trip. Once they arrive, Fry finds out that the moon is actually now mostly just Luna Park, a Disneyland knock-off and “the happiest place orbiting Earth.” Leela just wants to finish the delivery and go, but Fry convinces her to let him see the park.

Amy and Fry deliver the crate of toys for the crane games, but Amy accidentally drops the keys in the crate. The group goes into the park, which is revealed to be whimsical and fairly similar to “Main Street, U.S.A.” in Disney World. When looking through gift shop memorabilia, it’s revealed that Bender wants to be a folk singer, and that magnets reduce his inhibition. I’m only mentioning this now because it comes up a few times.

The group makes their way onto the ride Luna Park: Whalers on the Sea of Tranquility which contains one of the more bizarre jokes in the show, as it’s an “It’s a Small World” ride but with whalers who sing the, admittedly catchy, song:

We’re whalers on the moon,
We carry a harpoon,
But there ain’t no whales,
So we tell tall tales,
And sing our whaling tune! 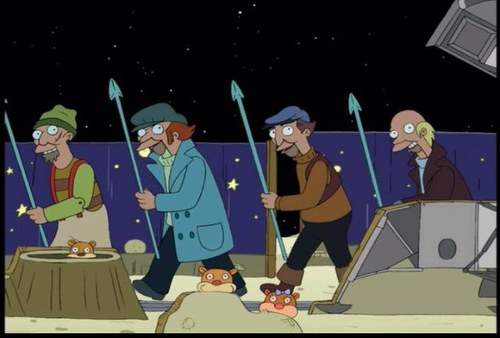 This is the kind of gag I wish I could have been present for writing, because it represents something that’s obvious and yet I know I never would have thought of it. They then see an animatronics show with gophers in craters brought to you by Monsanto. As of this writing, that company name no longer exists, but neither do the original sponsors of most Disney rides, so the joke still works. Fry is getting sick of the park and wants to see the “real” moon, so Leela takes him on the Lunar Rover Ride, which goes out onto the moon’s surface.

On the ride, it’s revealed that history has become a little “muddled” over the last millennium, with the ride suggesting that Ralph Kramden was the first astronaut for threatening to hit his wife “to the moon” and that whalers actually DID come to the moon. Fry, annoyed, knocks the rover off its track and drives out onto the moon’s surface. He tries to find convince Leela to find the original moon landing site, but she points out it’s been lost for centuries. Back in the park, Amy and Bender find out that the keys to the ship are now in a crane machine. Amy tries to use the claw to win them back. Bender tries to help her, but gets caught by security, who throw him out, leading him to utter one of my favorite lines in the show:

Fry drives into a crater, wrecking the car, and requiring Leela to use their oxygen tank to save them, leaving them stranded with almost no air. They stumble upon a hydroponic farm run by a Moon Redneck (Billy West), who tells them they’ll have to work all night to pay for the oxygen to get back to the park. Fry thinks that’s not so bad until Leela points out that night lasts 2 weeks on the moon. However, the temperature also drops to -173°C, so they really don’t have a choice. In the tradition of farmers in old jokes, he does have three beautiful daughters, they just happen to be robots: Lulabelle 7, Daisy-Mae 128K, and THE CRUSHINATOR (Tress MacNeille, Tress MacNeille again, and Maurice LaMarche).

As Fry and Leela work milking buggalo (the mutated bugs that have replaced the now-extinct cow), Leela takes shots at Fry for not accepting that the moon just isn’t that interesting. They then see Bender being shot at by the farmer for sleeping with his robot daughters (though, not THE CRUSHINATOR, because “[a] lady that fine you gotta romance first”). They flee in a moon buggy across the lunar surface, barely escaping the farmer by jumping over a crater full of crocodiles. However, the buggy immediately breaks down.

Night begins to come across the moon as a wave of freezing darkness, so the three all start running away, finding the original Lunar Lander from the 1969 Moon Landing which was apparently put there by the “Historical Sticklers Society,” aka the people who would point out the lander left the moon with the astronauts. Bender gets left outside, leading him to say he’ll build his own lunar lander, with blackjack and hookers, before saying “screw the whole thing.”

Inside the lander, Fry tells Leela that he always dreamed of being an astronaut and that, to him, the moon was this untouchable, beautiful, romantic dream. But, in reality, it really is just a rock. Leela, feeling for him, tells him that it really is beautiful as they watch the Earthrise together. Meanwhile, Bender is being chased again by the farmer because he went back for THE CRUSHINATOR. He’s rescued by Amy in the Planet Express Ship using the magnetic crane, which then picks up the lunar lander. It’s revealed that Amy spent the day at the crane game, getting so good she won back all the prizes and the keys. Bender, hit with the magnet, is stuck singing “She’ll Be Comin’ Round the Mountain” as the episode ends.

First off, I have to congratulate the writers on knowing when a joke just wasn’t funny. In this episode and the pilot, the Professor tries to use the catchphrase “I am already in my pajamas” as an excuse not to do anything to help the crew. These are the only two uses of it, because it was dumb. Great job recognizing your mistake, guys.

This really was a solid follow-up to the pilot and it allowed people who missed the first episode to be brought up to speed really quickly with the opener about Fry being uncertain about the 31st Century. The advertisement at the beginning drove home exactly how Professor Farnsworth treats his crews. We’re introduced to the Cliff’s Notes versions of our future recurring characters, Hermes, Zoidberg, and Amy and we get a decent idea of who they’re going to be. Hermes is the bureaucrat, Zoidberg the incompetent doctor, and Amy is the… I don’t want to say ditz, but “absent-minded” character. She is a Ph.D. candidate in engineering, she’s clearly got brains.

The idea of the moon, one of the most romanticized objects in human history, becoming a cheap commercialized theme park is just brilliant. It’s a statement on humanity’s tendency to normalize what had previously been wondrous, like how we complain about airline meals or streaming speeds. I’m not saying it’s a bad thing, in fact it’s why humanity progresses so rapidly, I’m just saying that the point they’re making is completely valid: Whatever was once a dream will quickly become a gewgaw.

The recurring theme that nobody in the future really knows anything about the past is also sadly perpetually relevant. The show comes back to it a lot for that reason, but I do think the idea that they mistake Ralph Kramden, a media figure, for the brave men who went to the moon is also a solid joke. On that note:

Favorite Joke: Oh, God, this is tough. I love CraterFace getting a beerbottle shoved in his eye to resemble “A Journey to the Moon,” the amazing short film by Georges Méliès, but I’m going to have to give it up to a joke I only just got: That the Professor’s tape player has VCR++. Okay, so, I’m dating myself now, but back in the 90s, kids, when you wanted to record a TV show without being present, you had to use a VCR, set the clock and the date, then set a timer to record the show. This was considered so difficult that only our most advanced scientists could dare hope to record As the World Turns. However, eventually, a system was created called VCR Plus where, instead of having to figure out the timer, you just read a 6-digit code for the show out of the TV Guide and pushed it into the VCR, which coded it to record the date, time, and duration of the program. This alone would be a fun joke on the fact that they’d still be using tapes for some reason in the future, but it’s that it says VCR++ that made me laugh, because that’s a joke on C++, the coding language that was the next step forward in C (the language used to code VCR Plus). It’s a complicated joke, but I sometimes think those can be the best because it makes you feel like you earned the chuckle.