This is one of the best shows that anyone ever asked me to review. When I got a request for an episode of the second season of this show, I naturally had to watch through the first season, and it was nothing short of brilliant, even though I think the second ended up far surpassing it. Since the third season starts this month and they just put the second season on Netflix, I’ve decided to give a quick review of the seasons and why I love this show.

Eleanor Shellstrop (Kristen Bell) awakens in the afterlife to be greeted by Michael (Ted Danson), the architect of “The Good Place.” It’s revealed that, generally, when you die you either go to the Good Place or the Bad Place, according to how much good and bad you put into the world, with Eleanor ending up in the Good Place. Michael shows her clips of her life, showing how she earned her place before she’s introduced to her soul-mate Chidi Anagonye (William Jackson Harper), a moral philosophy professor. She then reveals to him a shocking truth: The memories Michael showed weren’t hers and she doesn’t actually belong in the Good Place. In fact, as we are shown flashbacks of Eleanor’s life, she’s basically spent the whole time putting everyone else’s needs below her own. Way below.

She decides that she needs to learn how to be a good person and Chidi agrees to teach her ethics, using his own knowledge and help from the Artificial Intelligence that runs the neighborhood, Janet (D’Arcy Carden). Meanwhile, her bad impulses start causing crazy things to happen in the Good Place, like giant frogs and rains of garbage, which confuses and disturbs Michael. Eleanor also becomes annoyed by her neighbor Tahani Al-Jamil (Jameela Jamil), a rich socialite who constantly seems to be helpful and upbeat. Eleanor finds out that Tahani’s soul-mate, a  silent monk named Jianyu, is actually Jason Mendoza (Manny Jacinto), a drug-dealing DJ from Jacksonville, Florida, who also isn’t supposed to be in the Good Place. 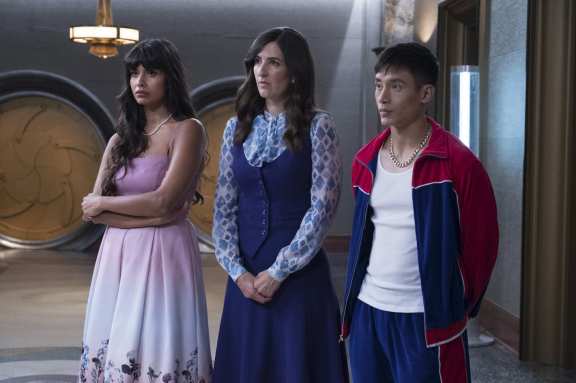 As the season goes on, Jason and Eleanor try to learn ethics from Chidi so they can deserve to be in the Good Place, but are forced to do more bad things to keep from being exposed, including sabotaging someone’s one true heavenly purpose and killing Janet (she gets better). At the same time, Eleanor and Chidi start to fall for each other. When Michael finally admits to everyone in the neighborhood that he doesn’t know what the problem is with the Good Place, Eleanor admits that she doesn’t belong there.

It’s revealed that Eleanor got there because another woman named Eleanor Shellstrop, who was a human-rights lawyer and activist died trying to save Eleanor’s life. That Eleanor is currently in the Bad Place and is brought to the Good Place by the demons, who want to take Eleanor (Bell) back with them. On urging from Chidi and Tahani, Michael tries to prove that Eleanor doesn’t deserve to be in the Bad Place. At the same time, Tahani finds out about Jason and also falls for Chidi. Jason and Janet, of all not-people, become an item and end up married. Eleanor finds out from Janet that there is a “Medium Place” and she flees there with Janet and Jason.

At the “Medium Place” they meet its sole inhabitant Mindy St. Claire (Maribeth Monroe), while Tahani, Chidi, and Michael plead Jason’s and Eleanor’s case before Shawn (Marc Evan Jackson), the Eternal Judge. Finding against the two, Shawn orders that if Eleanor and Jason don’t return, Tahani and Chidi will be sent to the Bad Place instead. They come back, but Shawn decides to let them decide who goes. In the middle of arguing over who should go, Eleanor finally realizes the truth:

Michael ends up admitting that she’s right and that this was his plan to figure out how to torture humans in a new way, but Eleanor sabotaged it. It turns out that everyone in the neighborhood but Tahani, Chidi, Jason, and Eleanor is a demon and they were supposed to drive each other insane. Michael asks Shawn for a “re-do” but Eleanor secretly slips a note to herself inside Janet. After the reset, Janet gives her the note, which says “Find Chidi.”

What if we combined No Exit with the Twilight Zone episode ‘A Nice Place to Visit?’

You will never convince me this wasn’t the pitch for this show. I’d actually be surprised if Michael Schur hasn’t admitted it. This seems like it shouldn’t work, but the amount of talent they bring to the show is almost blinding. I mean, it kind of has to be, since this is a show that’s mostly about MORAL PHILOSOPHY. It’s not super deep into it, admittedly, but it’s way deeper than any other network television show would ever even consider doing. Several episodes include lectures on ethics worked into the plot and they’re not only fairly comprehensive (for 12 minutes of discussion, at least), but entertaining.

The writing manages to balance information and discussion with humor and drama, which is walking an extremely difficult tightrope. The editing is also impressive, managing to cut between scenes without ever losing the flow of the A and B plots and also using it to avoid having to actually tell all the parts that the audience already expects. It’s like the Rick and Morty episode “Meeseeks and Destroy,” in that it allows us to skip most of the boring parts that would normally be inherent in a show like this.

Then there’s the acting. My god, there’s the acting. I love Kristen Bell and Ted Danson and have been a huge fan of past shows of theirs, but I never for a second think of them as anything but their characters when I see them within this show. That’d be impressive enough, but Carden, Jamil, Jacinto, and Harper constantly match their performances. The supporting and guest characters are also amazing, particularly Marc Evan Jackson (who I just like in everything), Adam Scott playing against type as a demon, and Tiya Sircar as the “real” Eleanor, whose “out of character” moment made me laugh so hard I flashed back to the few times I’ve done theater and seen a Prima Donna go nuts.

But more than the way the show is done, it’s what the show represents. This is a show whose main tenet is that it wants you to be a better person. It’s slyly telling you all the things that people have considered about ethics throughout history and why we should obey them. In a world where a lot of media, and even journalism, tells you to indulge in all your worst instincts or that there’s no point to anything, this show, which ostensibly is about the afterlife, actually creates reasons why you should care about how you treat others that don’t even require the “Good Place” to exist. It also points out other kinds of bad behavior that we wouldn’t normally consider. Sure, Jason and Eleanor did some pretty bad things, but Tahani and Chidi are also in hell for completely different reasons, namely that Tahani never did anything in her life for a reason aside from showing up her sister and Chidi was so indecisive that he made life miserable for everyone that cared about him (having a ton of different schools of thought to consider all the time). Those aren’t normally traits we think of as being worthy of damnation, but they’re actually things we should consider.

The other thing the show says is something that ABSOLUTELY needs to be shouted from every mountaintop. You can change. You can be a better person. You should try to be a better person because you owe it to everyone else around you. So often television shows, particularly sitcoms, have characters that have terrible traits and the show just writes it off as “that’s the way they are.” This show directly subverts that, even having Michael say that they believed having people become better was “supposed to be impossible.” Yes, the reboot undoes it a little, but even after that’s done, we see the characters, again, work towards being better people. Given how often people in the real world justify their behaviors by saying “that’s just the way I am,” I love the fact that there’s a show out there that responds “but you don’t have to be.” Being good is a matter of willpower and want. It’s not easy, but we owe it to each other, to our families, to our friends, to the people we love, to just be a little better every day. To learn from our mistakes and to grow.

Overall, I loved this season, which is what surprised me so much when I watched the next one and found it superior in almost every way. Obviously, that review will come soon.