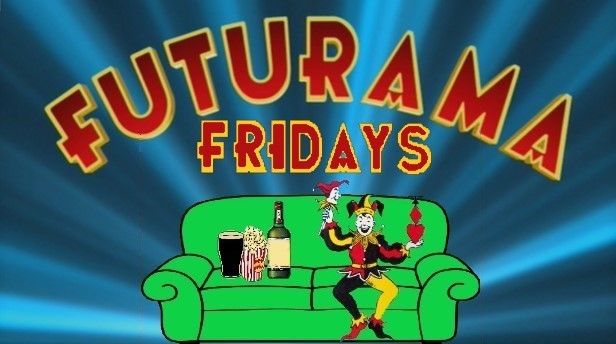 Planet Express is having a stockholder meeting and Fry and Zoidberg (Both Billy West) sneak off to find food at another meeting. First, they go to a Bot-Mitzvah, which doesn’t let Zoidberg in due to not permitting Shellfish or Swine (get it?). They then go to a recovery group for people who were cryogenically frozen, like Fry, where he meets “That Guy,” (David Herman), a 1980s stockbroker who had himself frozen to get a cure for his terminal boneitis. Fry invites him to join the Planet Express company at the stockholder meeting, then nominates him to be CEO of the company. He ends up being elected by 1 vote, due to Scruffy the Janitor (Herman) having four times the shares of anyone else and Hattie McDoogal, the crazy cat lady (Tress MacNeille), hating the Professor (West).

Now that That Guy (real name Steve Castle, but it’s never mentioned) is in charge of the company, he makes Fry Vice-Chairman and decides to attack Mom’s Friendly Delivery Company, the leading package company. Mom (MacNeille) vows revenge, but with That Guy’s 80s know-how, he gives the company a complete makeover to raise its stock price, then sells it to Mom, firing everyone.

Fry tries to block the takeover to save everyone’s jobs, but it turns out that Zoidberg sold all his shares to That Guy for a sandwich, giving That Guy majority control over the company. Just as the takeover is approved, That Guy dies of boneitis, which he never bothered to cure. Fry takes over the company, then ends up deciding to turn it back over to Professor Farnsworth. Leela (Katey Segal), Bender (John DiMaggio), Hermes (Phil LaMarr), and Amy (Lauren Tom), show up and try to convince Fry to sell the company, because as major stockholders they’d all be wealthy, only to find out that giving it to Farnsworth made the company worthless again. The crew ends up going back to work.

This is one of the funniest episodes of the show and certainly one of the episodes that I most frequently quote. It’s basically putting Gordon Gekko in Futurama and watching how it plays out. Naturally, this results in the episode completely and totally satirizing the common image of 80s stockbrokers as greedy, soulless, monsters by making That Guy the greediest monster imaginable, having no real substance as a person.

That Guy is just a perfect pastiche. He only ever references the 80s and its culture, from the music (Safety Dance) to the language (Awesome… Awesome to the max) to the commercials (the Apple 1984 Commercial) to the business ethics (“Friendship to me means that for two bucks I’d beat you with a pool cue till you got detached retinas”). He is focused solely on profit through appearance, rather than through actual work (noted by the fact that after he takes over, Planet Express stops delivering packages). His focus is solely on tearing down the work of other people for his own gain. Even more than Gordon Gekko, That Guy is self-aware that he’s being a complete monster, and he relishes every second of it. He considers being an 80s guy who wants to make as much money as possible as the whole of his identity, to the point that he forgets to cure his boneitis just because he gets too caught up on trying to capitalize on Planet Express. I have to give a special recognition to David Herman’s performance, because no matter how insane the things That Guy says can get, I always genuinely feel like he’s really trying to sell them to the listeners. He makes me think of Alec Baldwin’s speech from Glengarry, Glen Ross, but done by a muppet (sadly, that video is not yet real):

This episode also brings back Mom as an antagonist, something that I never realized only happened once per season for the first three seasons, but this time she’s really not directly trying to destroy Planet Express. Instead, she’s just serving as an equally plutocratic ally to That Guy, while simultaneously being a target for his own plot. Despite the fact that Mom hates That Guy’s attacks on her, she still gives in and agrees to his terms for the buyout, something that would have made him richer than ever. I suppose maybe vengeance just works differently for billionaires?

Overall, this is just a fun episode from start to finish. If you aren’t quoting it now, watch it and I guarantee that you will.

So many of the jokes in this episode are amazing that it’s basically just a string of hits. From the beginning where they do the Bot Mitzvah and the Cryo Support Group to the final sequence of watching the price of Planet Express fluctuate with every line Fry says, I think it’s all gold. That’s why it’s pretty hard for me to pick, so I’ll do the top 3:

Hermes: We can’t compete with Mom! Her company is big and evil! Ours is small and neutral!

That Guy: Switzerland is small and neutral! We are more like Germany, ambitious and misunderstood!

2) That Guy’s first speech to the team:

That Guy: Let’s cut to the chase. There are two kinds of people: Sheep and sharks. Anyone who’s a sheep is fired. Who’s a sheep?

Zoidberg: Uh, excuse me? Which is the one people like to hug?

That Guy: Gutsy question. You’re a shark. Sharks are winners and they don’t look back ’cause they don’t have necks. Necks are for sheep. I am proud to be the shepherd of this herd of sharks.

3) The stocks on the exchange, including Kirk – 1.25 and Gorn +2 (because Gorn would really win the fight), are all hilarious, but it’s the one that I spotted this time that takes the cake: eπi -1. That’s a reference to Euler’s identity (e^(i*π) = -1), one of the most profoundly beautiful equations in math. It’s quick, but I love that Futurama is filled with math jokes. 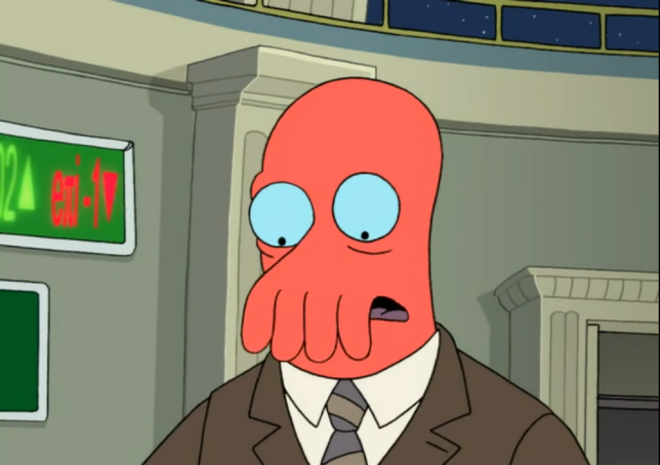