So, per Rotten Tomatoes and IMDB and Metacritic and every other rating thing I can find, this is the lowest rated of the movies Edgar Wright directed (granted, it’s still favorably rated). There are a couple of reasons for this: It’s got a lot more jokes that require specific outside knowledge, it’s based on an indie comic that wasn’t even finished at the time, and it’s much more styled towards a particular culture. But, more than that, I think it’s that people didn’t know exactly how to feel about the main character.

This movie takes place in the mysterious land of Toronto, Canada. However, even compared to the normal Canada, this one is particularly odd in that it obeys “video game rules.” 22-year-old bassist Scott Pilgrim (Michael Cera) is dating a high-schooler named Knives Chau (Ellen “Watch GLOW” Wong). One night, however, he sees Amazon delivery girl Ramona Flowers (Mary Elizabeth Winstead) rollerblade through his dreams before meeting her in real life. He starts dating her, but doesn’t break up with Knives.

When Scott plays at the Battle of the Bands with his band Sex Bob-Omb (Members Stephen Stills (Mark Webber) and Kim Pine (Alison Pill)), he is attacked by Ramona’s ex Matthew Patel (Satya Bhabha), who tells him that, in order to date Ramona, he has to defeat Ramona’s Seven Evil Exes. Scott is revealed to be an amazing fighter who ends up defeating Patel. Scott finally breaks up with Knives, but she blames Ramona and vows vengeance. Scott then tricks her second evil ex, Lucas Lee (Chris “You know who I am” Evans) into defeating himself, defeats her third ex, Todd Ingram (Brandon “You know who I am, but a little less” Routh) by tricking him into drinking cream which leads the Vegan Police (Clifton Collins, Jr. and Thomas Jane) to remove his “vegan powers,” and defeats her fourth evil ex, Roxy (or Roxie) Richter (Mae “Her?” Whitman) mildly pornographically.

Scott and Ramona have a fight, leading her to dump him. At the next Battle of the Bands, however, Scott and Sex Bob-Omb are pitted against Ramon’s fifth and sixth exes Kyle and Ken Katayanagi (Shota and Keita Saito), who they defeat, earning Scott an extra life. It’s then revealed that the Battle was sponsored by Ramona’s seventh ex, Gideon Graves (Jason Schwartzman), who she has now gotten back with. Scott quits the band when they sign with Gideon.

After a pep-talk (consisting of “finish him”) from his roommate Wallace Wells (Kieran Culkin), Scott resolves to win Ramona back and heads to the Chaos Theater, where Gideon and the band (now with Young Neil (Johnny Simmons) are. Scott challenges Gideon but is defeated. He then uses his extra life to try again, this time being honest and mature about everything he’s done, finally defeating Gideon. He’s then confronted by Nega-Scott, who ends up being a nice guy. Ramona starts to leave, but, with prompting from Knives, Scott goes with her, walking into a doorway to somewhere new.

Unlike the Cornetto Trilogy or Baby Driver, this movie was actually based on an existing property, the excellent Scott Pilgrim comics by Bryan Lee O’Malley. Because of that, a lot of the plot elements were kind of locked in, although they were adapted to film by Wright and Michael Bacall (21 Jump Street). A big thing is that the comic series wasn’t over at the time the movie was being made, so they had options as to how to end it. Unfortunately, they picked an ending, then found out that they’d picked the opposite of the comics and also the one that the audience didn’t like, so they reversed themselves. In the alternate ending, Scott actually picks Knives, which is weird because that’s basically undoing a lot of the growth of the film.

Now, again, this is the lowest rated film by Edgar Wright, and the main thing I think people don’t like about this movie is that Scott Pilgrim is not a great guy. In fact, that’s pretty much the point of the last volume of the comic series, which hadn’t come out yet. It’s a bit more explicit there, where it’s pointed out that much of the comic is just from Scott’s viewpoint and accepting the objective truth of what he’s done to people in the past allows him to finally realize that he’s a dick. In this movie, the realization isn’t as pronounced and is basically accomplished as part of a montage, which kind of hurts our appreciation of his growth.

It’s not really abnormal to have a protagonist who’s a bad person, tons of movies have done it, but it’s the kind of bad person that Scott is. Scott’s really just kind of a selfish asshole who doesn’t realize it. He dated Kim and treated her so badly that during the movie, she doesn’t even break her gaze most of the time. She constantly insults him and when he claims to be offended, she seems skeptical that he’s even capable of caring what she thinks… which he usually ignores and moves on.

He doesn’t have a job, he mooches off of Wallace, he doesn’t have any aspirations, he dates a high-schooler despite being 22, and he cheats on her the minute he finds someone else. Unlike Shaun from Shaun of the Dead or Gary King from The World’s End, Scott doesn’t really have that many redeeming qualities. He’s cowardly, he’s not particularly loyal to his friends or his band, he’s not even that funny. You’re just not supposed to like him. At the end of the movie, we even meet “NegaScott,” who is revealed to be, if anything, slightly nicer than regular Scott, meaning Scott is actually the evil twin. But, since he’s played as being somewhat adorable, a great bassist and fighter, and is the protagonist, you find yourself naturally kind of wanting to like him, so the movie is kind of confusing your feelings. I think that turned a lot of people off.

The point of Scott’s journey isn’t actually to be a better person in the heroic cycle where he ends up completely different and changed by the journey at the end. Scott’s story is just him realizing that he needs to change and accepting that he isn’t the awesome person he thinks he is. 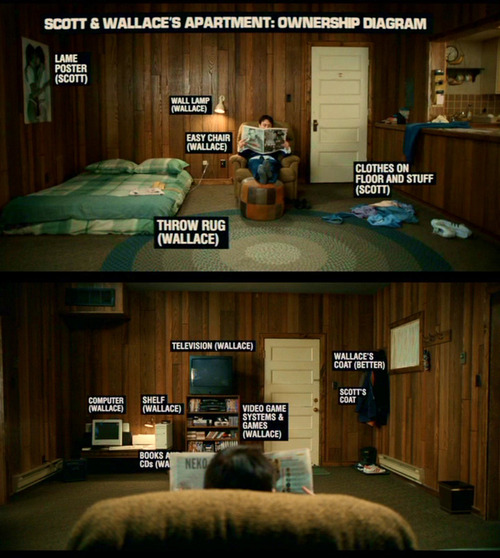 Meanwhile, Ramona is portrayed pretty straightforwardly. She’s not a great person either, but she’s more honest about it and doesn’t like it. She even tries to keep out of other people’s lives to spare them her the trouble of dealing with her. However, she’s not much braver than Scott, trying to run or hide from any issue, symbolized by her ever-changing hair.

Since I’m apparently doing characters, I will have to pause and say that I think this is among the best supporting casts ever placed in a film. Yes, most of them seem like exaggerated caricatures, but it’s a video game world inside a comic book, that’s actually nailing it. I particularly love Kieran Culkin as Wallace Wells, who manages to be both supportive and also undercut Scott’s bad habits constantly. The villains also carry sufficient weight, particularly given that most of them are only on film for a few minutes.

Now, to get into the most impressive part of the movie, the style. Since Wright was following the comic, he didn’t get as much control over the plot and characters, but more than made up for it in his choices of music, costume, and settings. The amount of effort put forth in the film is ridiculous, with almost every shot having some sort of secondary meaning.

The biggest one is probably the style of the villains. Each one is given elements that reflect what number they are in the league. Matthew Patel appears to only have one eye due to his hairstyle and has one chevron on his shoulder. Lucas Lee uses stunt doubles and has a 2 tattooed on his neck. Todd wears a 3 on his shirt and loses due to his third strike violation of Vegan Law. Roxie fights Scott in a club called “4” and is defeated by “foreplay.” The Katayanagi twins have an amp that goes to 11 (5+6). Gideon’s fight is filled with sevens. In contrast, Scott wears a shirt saying “zero,” drinks Coke Zero, and draws zeroes when he’s nervous.

The transitions in the movie are impressive, with the characters constantly shifting from scene to scene, often in one fluid motion, which makes it feel more like a comic book or a video game transition. Likewise, there are a ton of quick-change cuts that almost feel like the character just changed their equipment rather than getting dressed. Even a lot of the actions have visual cues, ranging from motion lines to outright verbal sound effects. 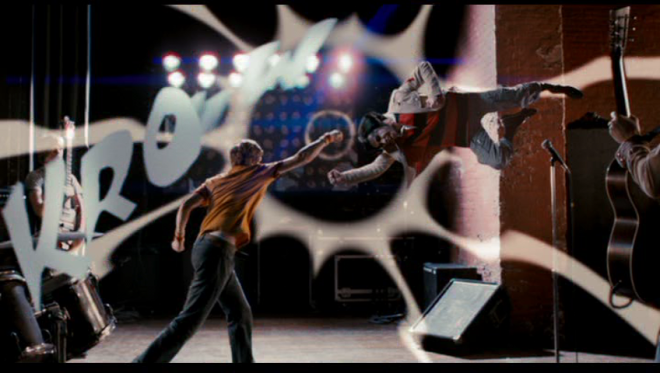 The music in the film is amazing, as you would expect, but the sound effects are also perfect. In a sitcom scene, they play the Seinfeld theme. In a bathroom scene, they play the Fairy Fountain theme from The Legend of Zelda series. Video game sounds are repeatedly used to punctuate actions, including the famous “KO” effect from VirtuaFighter.

Overall, I love this film. It’s got great re-watchability, it’s visually stunning, and, mostly, it’s one of the only movies that actually feels like a video game, far more than any video game movie.