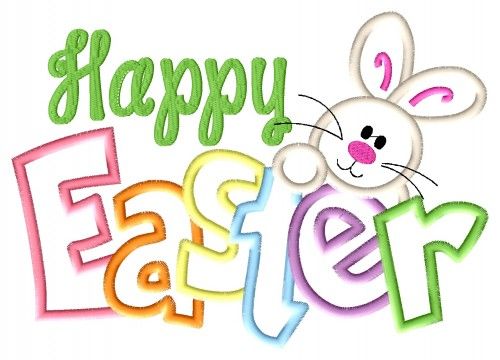 Happy Easter, everyone! Eat some candy in the shape of a bunny or a chick, eat some jelly beans, paint some eggs, go to church for the first time since Christmas, and blow up a cart in front of the Duomo. In honor of this most oddly-celebrated of holidays, I present to you the 5 best TV Easter episodes of all time:

Runner up: The Turtles and the Hare (Teenage Mutant Ninja Turtle) 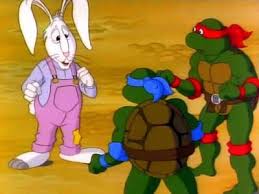 It’s Easter, and Krang and Shredder are trying to use their “Docilizer” ray to turn everyone as docile as rabbits (because they haven’t seen Watership Down). A Bunny-Suited Bebop and Rocksteady even manage to get April O’Neil just as she’s calling the Turtles for help. To counteract the ray, the Turtles need a crystal from a “fairy tale dimension.” When they go there, they encounter Hokum Hare, the rabbit from “The Tortoise and the Hare,” who they befriend and eventually drag back to Earth. Hokum helps defeat the evil plan, then acts as the “Easter Bunny” for the Channel 6 Easter Egg Hunt.

The biggest mistake in this episode is that they couldn’t get Usagi Yojimbo back to play the Easter Bunny. If you know who that is, you agree with me. 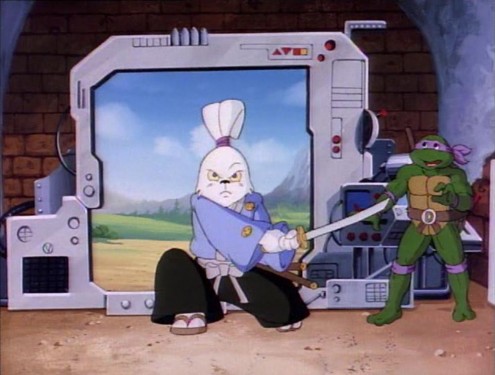 Okay, so, never let it be said the Linus Van Pelt (Stephen Shea) was a quitter. Despite the fact that he failed to find the Great Pumpkin, he believes that the Easter Beagle is going to take care of all of the Easter festivities. Meanwhile, the rest of the Peanuts gang tries to celebrate in all their usual ways. The highlight of the episode is Peppermint Patty (Linda Ercoll) trying to teach Marcie (Jimmy Ahrens) how to decorate eggs. Marcie’s complete lack of experience leads her to ruin so many of the eggs that eventually Patty is out of money, without a single egg done.

Meanwhile, Lucy (Melanie Kohn) tries to create a private egg hunt, but Snoopy (Bill Melendez) follows behind her and steals the eggs. On Easter, Snoopy runs through town as the “Easter Beagle,” distributing eggs to everyone. However, when he gets to Charlie Brown (Todd Barbee), he runs out. Embarrassed, Snoopy gives him the basket. Charlie Brown is the loser, after all.

It was a cute follow up to the Great Pumpkin, and Patty and Marcie are hilarious. 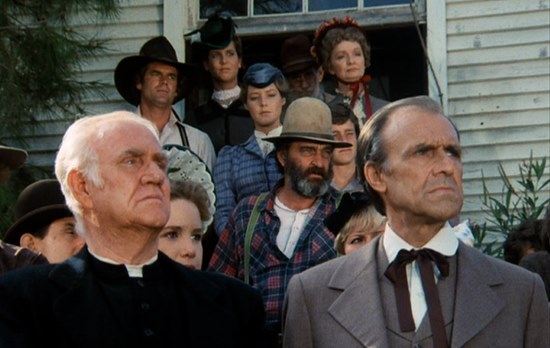 So, after 10 years of Little House on the Prairie, the show finally ended, but there were three TV Specials that came after. For reasons that will become obvious, this is the last one of those (though the Christmas one got delayed, so it aired after).

So, basically, it’s a few years after the end of the show, and Charles and Caroline Ingalls (Michael Landon and Karen Grassle) stay in the little house from the show while the Carters, who took over the house during the last season, are out of town.

However, a land tycoon has actually acquired the deed to the town of Walnut Grove where the show took place. The town tries to defeat the claim in court, but they lose. They try to force the tycoon to leave, but the tycoon is backed by the army (and, btw, he does actually own the land, the town was built illegally and adverse possession didn’t apply to the territories). So, Laura (Melissa Gilbert), encourages the town, on the last Sunday, Easter Sunday, to do the just thing.

So, the town celebrates Easter by dynamiting all of the buildings, ruining the property value before the tycoon gets there. And this was completely real, btw. Michael Landon was told that the studio had to return the property back to its original state, and this was his solution: Blow up the town they had built for the show. However, since the town is at Easter mass, the church was the only building left (aside from the Little House). I can only assume this was the best sermon ever.

3) The Easter Bunny is Coming to Town 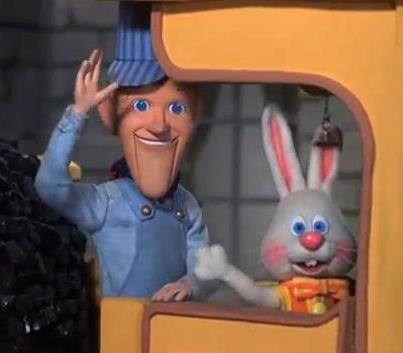 This is the second Rankin/Bass Easter Special after Here Comes Peter Cottontail, but I’m going with this one because it starts in the town of Kidville, which is a weird socialist dystopia populated entirely by orphans… because the next town over, called Town, won’t allow children. This is such a bizarre set-up that I can’t help but love it. The kids adopt a bunny named Sunny, who grows up trying to sell eggs.

When a bear keeps stealing them, the kids paint the eggs and Sunny tells the bear he’s selling colored stones as paperweights. The bear lets him through and Sunny distributes the eggs on Easter. The child king of the town declares him the “Easter Bunny,” but his aunt Lily, who actually runs the town, kicks Sunny out and outlaws eggs, making beans the only food. To get around this, Sunny brings the king Jelly Beans the next Easter, along with the eggs. However, the bear, thinking they’re colored stones, chucks the basket full of eggs, resulting in the Egg hunt being invented. The next year, when the aunt puts guards to stop Sunny from coming to town, Sunny covers himself in chocolate and Trojan Horses his way in. The next year, he just builds a train into the city, which renders all prior plans useless by comparison.

It’s a cute special that tries to explain why we have such a strange amalgam of Easter traditions in an interesting story. I refuse to apologize. 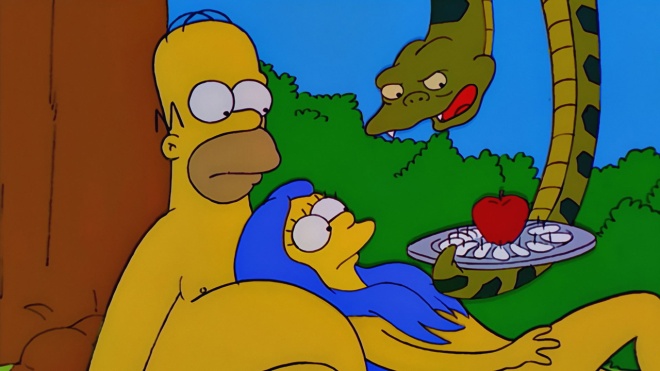 On a hot Easter Sunday, Homer ticks off Reverend Lovejoy, leading him to just start reading the Bible. The Simpsons proceed to pass out during the sermon and dream of different bible tales.

First, Marge imagines herself as Eve to Homer’s Adam. Unlike the usual version, Adam eats the apple but frames Eve. Homer then tunnels her back into Eden using a Unicorn named Gary, who ends up dying. This Unicide leads God to kick them out.

Lisa imagines herself as the power behind Milhouse’s Moses. Lisa and Milhouse incite plagues against the Egyptians (which fail, because the Egyptians love eating frogs), until finally the pair lead the Hebrews to the Red Sea, which they drain by flushing a huge number of toilets. At the end, Milhouse asks Lisa what the future holds for the Jews. Rather than answering, Lisa tells them to find Manna.

Homer imagines himself as Solomon. Lenny and Carl bring a pie before him that both claim to own. Homer cuts it in half, then orders them killed so that he can eat the pie.

Bart envisions himself as David (who came before Solomon, for the record), who is dethroned by Goliath II, son of Goliath. David trains and kills Goliath II in combat, only to discover that Goliath II was a great ruler, much better than David. David is then arrested.

The Simpsons awaken to find that, due to them sleeping through church, they were not raptured and the apocalypse has come. Lisa begins to rise to heaven, but Homer pulls her back. The family then descends to hell, where Homer smells BBQ, as “Highway to Hell” plays.

Stan Marsh is questioning all the goofy Easter traditions, but is told just to go with it. Unsatisfied, Stan starts investigating, and is followed by men in bunny suits. Eventually, he finds his dad, Randy, wearing bunny ears. Randy explains that he’s part of the “Hare Club for Men” who has been guarding the great secret of Easter since Jesus. However, the group is attacked by Catholic ninjas before they can explain, and Stan escapes with Snowball, a bunny.

Stan goes to Kyle for help, but, being Jewish, Kyle knows nothing of Easter. They then track down a professor of history who explains the secret: Peter, the Apostle and the First Pope, was a rabbit. That’s why the Pope has a mitre (to hide bunny ears). Snowball is the last descendent of Peter. The clues are contained within eggs (Easter Eggs) found in Da Vinci’s Last Supper.

Honestly, I love this episode. I think it’s a great parody of the Da Vinci Code, of Easter Specials, and of Bill Donohue (who loved the episode because he gave the Church “some guts” by ordering mass murder). And the final message is actually pretty good.

Link to the Archives.