Alright, so, this episode of a children’s show is fairly infamous and goes around the internet on occasion. Why? Because it’s basically an example of cruel and unusual punishment.

Quick background on the show: 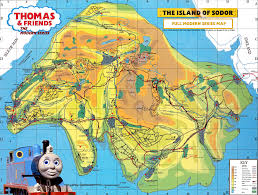 Thomas the Tank Engine and Friends takes place on the Island of Sodor. It’s a fictional island in the Irish Sea that’s heavily industrialized with a massive railway system, and all of the trains, and many of the other vehicles, possess human faces, emotions, and a degree of autonomy. This becomes important in a minute.

The most famous character is Thomas, a tank engine (meaning he carries his water for his steam on-board in a water tank), who is engine number 1, and has a very cheeky but upbeat personality. However, the focus of this episode is Henry, engine number 3. The episode is narrated by none other than Ringo freaking Starr.

When it starts to rain on the island, Henry, worried that the rain is going to ruin his nice new paint job, goes into a tunnel to hide, blocking off one of the two tunnels to get through those hills. Sir Topham Hatt, the fat controller of the rail system, tells the train guard to get a rope, and has all the workers on the rail line try to pull Henry out of the tunnel. Henry refuses to budge, stating that he doesn’t want to ruin his paint. The workers point out that it isn’t raining anymore, but Henry says that it will eventually, and then it’ll ruin his paint. Topham Hatt has the workers try to push Henry through, but Henry refuses to budge.

It’s worth noting that Topham Hatt does not actually try to pull or push with the people, instead citing that he has a note from his doctor not to do any actual work.

Finally, they send Thomas to try and push him through, but Henry still refuses to budge. Frustrated, Topham Hatt decides that they’re going to punish Henry. So, they brick him up inside of the tunnel.

Now, again, this is a train with emotions, who talks, feels, and thinks just like a human. He’s been inconveniencing the rail for about a day, if that. And their solution is to BRICK HIM INSIDE OF THE TUNNEL, rendering the tunnel he’s in useless anyway. They only do the bottom half, however, so that he can see out, and the other trains can mock him as they pass. But, Henry can’t really respond anymore; he has no steam left, because he’s TRAPPED IN A F*CKING TUNNEL. Since, apparently, he can’t die, they leave him in there just to be mocked at and stay there forever, with a sad look on his face.

Edgar Allan Poe once described a similar idea in a short story called “The Cask of Amontillado.” A man, Montressor, bricks up an enemy, Fortunato, leaving him to die behind a wall, over what is stated to be an “insult.” Fortunato doesn’t appear to have realized it was that big of a deal, or that he’d even offended Montressor. To justify his actions, Montressor merely states that it comes from his family motto: “No one attacks me with impunity.” It’s basically a massive, cruel overreaction to a small grievance. This children’s show just did the same thing, and made it even worse by having Ringo end the narration with: “Soot and dirt from the tunnel had spoiled his green paint with red stripes anyway. Henry wondered if he would ever be allowed to pull trains again. But I think he deserved his punishment, don’t you?”

Yes, Ringo, teach the children that minor inconveniences should be handled with horror-story punishments. Other kid steal your toy? Cut their heart out and bury it under the floor. Someone pushes you on the playground? Tie them to the ground and slowly lower a razor-sharp pendulum towards their stomach. This episode is basically made to create sociopaths.

Fortunately, if you watch the very next episode, Henry is actually let out of the tunnel after another of the trains is disabled, and Henry agrees to go back to pulling the train cars again. That episode ends with Henry learning that the best way to keep his paint nice is to ask his driver to “rub him down after a run.”

So, remember, kids: Over the top punishments are fine, but you can stop once you need that person to perform an essential task and you have literally no other options. That way, you’ve tortured them into complacency.