UPDATE: Forgot to hit “Update” after adding the pictures and I’m currently working, so I’ll redo this later.

It’s a pretty old concept that someone experiencing madness might be indistinguishable from someone who is dealing with the supernatural. The Tell-Tale Heart, The Turn of the Screw, Young Goodman Brown, these are just the ones I can name off of the top of my head that are more than 100 years old. So, naturally, writers, and later filmmakers, have had a long time to play around with it. Some of them have been great horror films, like the original The Haunting, and some have been not-so-great, like Hellraiser: Inferno. This one is kind of in the middle.

Tom Walker (Topher Grace) is a recently released mental patient. Upon his release, he’s informed that his father (Robin Thomas) has recently committed suicide and given him everything in the will, including his family’s mansion. Tom has to live there for 30 days on house-arrest as one of the conditions of his release. His parole officer, Brody (Patricia Clarkson), is rooting for him to fail, based upon the horrible nature of the crime that got him committed in the first place.

Shortly after moving in, Tom begins to have minor hallucinations and starts to discover secrets within his father’s house. He tries to seek help from local delivery girl Lynn (Genesis Rodriguez), but fantasy and reality continue to blend. This is only amplified when Brody takes his medication away, leading Tom to be uncertain what aspects of what he sees are real or just in his head, including images of his dead father and his abusive brother (Callan Mulvey).

Like I said, there are a lot of movies and stories that involve an unreliable narrator whose mental state may be changing reality. In this film, the first thing we know about Tom is that he has hallucinations, so, naturally, we assume that what he’s seeing is a hallucination. In fact, one of the first times we see a ghostly image in the movie, we are told that what we are seeing is just a hallucination. The problem is, that makes it seem much more likely throughout the movie that we’re just seeing hallucinations when it comes to the supernatural elements. In fact, the only things that really evoked the question of “is this real” are his interactions with characters that were previously established as being alive and potentially there. It kind of robbed a lot of the film of the tension.

The parts where he appears to be discovering the house’s hidden passages and rooms, while they do contain elements that appear to be in his head, are pretty much portrayed as unambiguously real, meaning all of the secrets he finds are genuine. It also doesn’t help that our main character constantly believes that nothing happening to him is real, which means that we are less likely to believe it could be real. Again, it kind of robs the tension.

The big upside of the film is that Topher Grace’s performance is pretty solid. His character’s connection to the pool, which later has even more significance, is actually a good use of “show, don’t tell,” something of which I am a major proponent. The backstory to his imprisonment is pretty grim and the sequence expanding on it is done well. The connection between violence, madness, and each of the family members is a good theme that deserved exploration, even if it wasn’t explored enough. Patricia Clarkson is wasted within most of the film, with my response to her character ranging from “what” to “huh.” 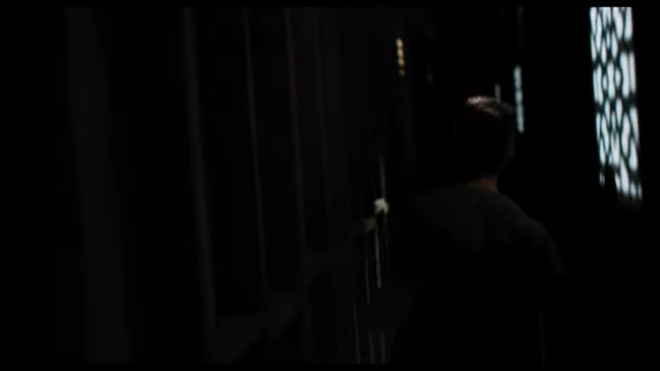 However, ultimately, the movie can’t exactly decide what parts it wants us to think are real and what parts it doesn’t. It then starts to shove a bunch of resolutions in the audiences’ collective face which feel somewhat random and unearned. It’s not a bad film, but don’t put it at the top of your list.

By the Grouch on the Couch

Obvious fact: Spike Lee is not subtle about the state of America’s race relations. Whether you agree with him or don’t, the man has made his opinion on the treatment of black people within the US damn clear for about 30 years. Hell, he says people call him the “angry black filmmaker.” Ten minutes on Reddit will tell you that’s the nicer version of what some people call him. BlacKkKlansman will not change that, because he’s clearly still black and angry.

And the movie’s a strong case that he’s justified in being that way.

Now, add in the fact that he’s got a true story like this and Jordan Peele producing and you have a recipe for a film that’s gonna piss a lot of people off. However, they’re the people who deserve to be pissed off.

Ron Stallworth (John David Washington) is the first black police officer in Colorado Springs, Colorado. He’s first sent to infiltrate a speech by Black Activist and creator of the “Black Power” movement, Kwame Ture (Corey Hawkins), where he meets anti-police Black Student Union President Patrice Dumas (Laura Harrier), who he begins to date. At the same time, he answers an ad in the newspaper conducting a recruitment drive for the Ku Klux Klan, talking to the members over the phone. With Jewish Detective Flip Zimmerman (Adam Driver) as his surrogate for in-person meetings, Stallworth works his way into the organization, eventually striking up a fake friendship with David Duke (Topher Grace).

So, the movie definitely plays up the fact that a lot of the slogans which have resurfaced recently like “America First” and “Make America Great Again” were previously used by groups that were less than subtle about their racism and xenophobia. By that, I obviously mean the f*cking Klan. Granted “Make (insert country) Great Again,” and “(insert country/empire) First” could be derived from translations of a ton of cultural movements throughout history, but generally they were movements that were based on some form of intense discrimination. I’m sure there’s a cave painting somewhere that translates to “Eagle and Goat Tribe First.”

They also point out that the real success of the Klan was that it tried to suppress its more violent members, instead replacing the leadership with images of respectable-appearing people such as David Duke. Kudos to Topher Grace, his version of Duke is actually kind of charming. It’s believable that he could convince a group of violent racists that the real success of racism would come from making it more acceptable to the common people, by framing it under things like “crime statistics,” “red-lining,” or “drug use.” While many of the Klansmen are portrayed as completely insane or degenerate racists, it’s the ones that aren’t that are more intimidating, because they seem relatively reasonable when they’re talking, even trying to keep the others in check. The more insane ones at times seem almost cartoonishly over-the-top in their racist crusade, but, well, I’ve known people who are like that, so… can’t say it goes too far.

In a moment of balance, the movie also calls out some of the problems with the Black Power movement, by having some of the members completely reject Ron’s attempts to be a police officer as “being part of the problem,” despite the fact that he saves their lives and prevents the KKK from committing atrocities. Oh, and is a good police officer, something that everyone should support. But, of course, their criticism of him for being a police officer kind of pales in comparison to all the stuff that the Klan does.

One of the scenes that’s most interesting in the film is that they show a Klan initiation intercut with a telling (by Harry Belafonte, no less) of the 1916 Lynching of Jesse Washington, one of the most brutal acts of mob violence in US history. Jesse Washington, a black man, was found guilty of sexually assaulting and murdering a white woman, then was dragged outside, beaten, stabbed, dismembered, castrated, burned alive, and hung. A crowd of ~10,000 people watched, including the Mayor, Police Chief, and a professional photographer, making it a well-documented event. Even if he was guilty (which the physical evidence did suggest), HE WAS TORTURED AND BURNED TO DEATH PUBLICLY. There should never have been a time when that was okay, but the event was more condoned because of the recent release of Birth of a Nation (a movie that puts a nice, positive spin on white supremacy and the Klan). Like I said, it’s a solid scene, reminding us of exactly how much we try to erase from our nation’s history.

The cinematography and soundtrack (with score by Terence Blanchard, who does many of Lee’s films) are amazing. The images of the cast looking directly into the audience are chilling, almost accusatory, and the effect is profound. The performances are all great, although special credit to Washington, who balances a lot of character traits within his portrayal.

Overall, it’s a solid film. It’s a little preachy, sometimes feeling like Lee’s dropping a moral anvil on your head, but, dammit, sometimes the anvil needs to be dropped. I recommend seeing it, but, *Spoiler alert* you do want to brace for the final shots of the film, because it moves from the movie to just news clips of the last 2 years, and… well, you will hear a f*cking pin drop from 3 theaters over as the credits start to roll.